Striding freely for new risky adventures in the wilderness is, I guess, liberating to some people like Aron Ralston. They are willing to dash into their goals while appreciating the vast beauty of nature surrounding them, and, in the end, they earn the sense of accomplishment – if they are lucky. Most of them clearly know of the dangers inherent in their activities, but the nature is a merciless opponent. Even though they are careful and confident, accidents happen to everyone randomly and equally, and we hear about their unfortunate incidents from time to time.

The same thing can be said about Ralston, an experienced mountain climber who went alone into one canyon in the Canyonlands National Park, Utah in April 2003. At one point, he thought he could climb down easily along the walls of canyon, so he began the descent, and then, oops, he happened to dislodge a boulder wedged between the walls. He fell to near the bottom, but he was all right – except that his right hand was wedged between the boulder and the canyon. No one could help him for he did not notify others about where he had gone and he did not have a cell phone. When you are alone in the wilderness, nobody, except wild animals, can hear you shout in most cases.

Unlike Danny Boyle’s previous movie “Slumdog Millionaire”, which briskly runs amid many various aspects of India with its hero, his new movie “127 Hours” is about a man who cannot move from the place where he is stuck – and how he is led to make a certain tough choice in this grim reality. It is definitely not something you can watch comfortably, but Boyle tackles this challenging subject in an exceptional way, and it is a visually and emotionally gripping work as a result. The movie shows from the beginning that it is based on the book “Between a Rock and a Hard Place” written by Ralston himself, so you know what will eventually happen in the end even if you have not heard about his story, but the movie is a compelling experience nonetheless; it is about the situation rather than the plot. 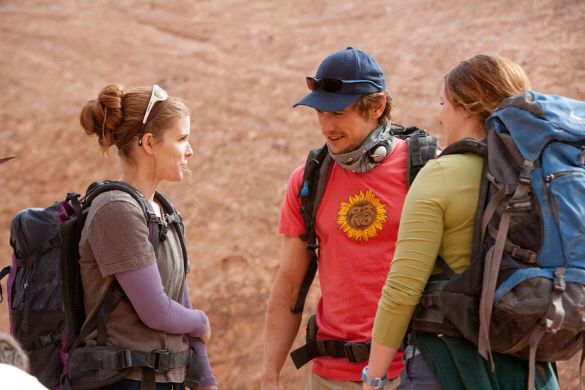 After the lively prologue sequence involving Ralston’s brief encounter with two girls, their fun time in the underground pool, and the following accident, the film closely observes on how Ralston, played by James Franco, deals with his trouble. He desperately tries to move the boulder at first, but it becomes clear to him that he cannot move it for himself. He assesses his limited resources including a bottle of water, a digital video camera, ropes, and a multipurpose tool with a relatively dull knife, and he tries to solve his problems with them. One fortunate thing for him is that he can manage to rest or sleep. It could have been far worse if the boulder had him dangled above the bottom of the canyon.

No matter how much Ralston tries, his chance for survival gets decreased second by second. He is still stuck at the bottom of the canyon while facing the dangers including dehydration and hypothermia. He manages to deal with these problems for a while, but it becomes harder and harder for him to maintain the situation as the time goes by. He has accepted that no one can come to rescue him before it is too late, so one drastic solution to his matter begins to emerge in his mind. Surely it is so risky that he hesitates that at first, but it is the matter of a choice between a torturously long waiting for his death and an excruciatingly painful trial with lots of, and lots of, fatal possibilities. After all, it goes without saying that his right hand cannot be saved even at the best condition, so….

With its trapped hero, the movie reminds me of Rodrigo Cortés’ “Buried”(2010), another movie about similar premise. It was a very interesting experience for me to watch two movies during a short period. Both have the premise that seems to be not so compelling enough to make into a feature movie, but both achieve their respective goals admiringly in their own ways. And they remind us how it will be terrifying for us to be alone and helpless while stuck with the possibility of imminent death. 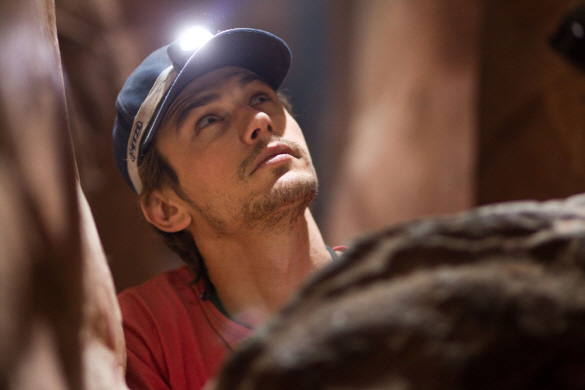 The difference is, in contrast to that insidiously immovable dark power of “Buried”, “127 Hours” is brimming with its vibrant kinetic energy while recognizing denial, anger, frustration, and acceptance in its hopeless state. Boyle and his crews do their best to make their movie, shall I say, a very watchable one, and they really have done it. Thanks to the vividly impressive cinematography by Anthony Dod Mantle and Enrique Chediak and skillful editing by Jon Harris, the movie stays very closely with Ralston, his mind, and his circumstances. With lots of time in the trapped state, Ralston’s perception on the surroundings becomes keener – he notices a raven flying over the sky every day at exactly the same time in the morning. His mind goes freely into the memories with his family and friends. He also experiences some hallucinations coupled with the introspection about his life. The movie always makes us conscious of his physical state; the landscape still looks beautiful, he is still trapped in the canyon, and he still has to make a hard choice sooner or later.

There have been lots of talks about that mutilation sequence in the climax which shocked some audiences a lot during the screenings. I have to admit that it was hard for me to watch this sequence on the screen, but it is shown with skills while supported by our empathy built on its hero. James Franco recently got an Oscar nomination for this movie, and he deserves that for carrying the movie for himself during most of its running time. With the camera always near him, Franco does a credible job of presenting to us an ordinary young man who is capable of making such a hard choice to survive. Ralston does not lose his sense of humor as well as his will in his dire circumstances, and Franco shows some of his comic talent in one funny scene(but it’s not so funny if you are in his shoes, by the way).

We see blood and some gory details with considerable medical accuracy in the climax sequence. The film effectively conveys to us how excruciating it was to Ralston with the suggestions created by the clever mix of sound effects, editing and cinematography. Driven by the aggressively dynamic score by A.R. Rahman, this sequence crackles with the barely bearable intensity that makes torture porn movies like “Saw” and its sequels ridiculous. While the bodies are mutilated as some sort of a twisted entertainment with no emotional connection from us in those movies, we have a believable and vulnerable human being we care about, and that is why this sequence is more striking, more painful and, I dare to say, more cathartic to us. As a biology major, I recognized that thin white sensitive tissue on the screen and winced even before the sound effect came in because I knew well about how it would be penetratingly painful for Ralston. He was quite lucky considering that he could have died for blood loss even with his makeshift tourniquet.

In spite of grim situation and following grueling climax, “127 Hours” is ultimately an optimistic movie whose spirit is kicking and spinning in its stuffy space as much as Ralston. It reminds me that people are capable of doing anything at the right time and at the right place – that always both amuses and horrifies me. After surviving from his ordeal and giving a farewell to his right arm, Ralston is still active with his mountain climbing and canyoneering. Of course, the lesson that cost his right arm is not something easy to forget; he always leaves a note saying where he has gone.