How unpredictable the Coen brothers are – I have been always amused by their unpredictability in their career. When we became a little bit disappointed with playfully heartless puppet plays in their lesser movies for a while, they suddenly ambushed us with the greatness as shown in “Fargo” or “No Country for Old Men”. After getting three Oscars including Best Picture award for the latter, they immediately went to having a little cold fun with “Burn After Reading”, and then they stroke us again with “A Serious Man”, a sublime black comedy whose neurotic hero is punched repeatedly by the chaos in the life while he is desperately looking for an answer or an order in it. No matter what kind of film they make, the Coen brothers make it because they want to do it – and because they can do it. As they said, they are just same as when they made movies together at their home in adolescent years.

That was why I was both surprised and not so surprised when I heard about the Coen brothers’ next project after “A Serious Man”: The remake of 1969 movie “True Grit”. Based on Charles Portis’ novel with the same name, the 1969 version is not a great movie, but it is still an enjoyable classic western film with an Oscar-winning performance by John Wayne. It is debatable whether that win was more for honoring his great career than for his performance, but it is, if not the best, one of his great performances, and that is one of the main reasons that make the movie still work at present.

The most interesting thing about the Coen brother’s version is that, they made a surprisingly straightforward western film with little twists. Although they make some diversions from the original plot in the middle, this version is more faithful to Portis’ novel than the 1969 version, and it is actually an improved version in many aspects. As a matter of fact, Portis’s novel(Pardon my ignorance, I was really surprised to know that it was actually written in the 1960s) has a dry sense of humor along with its attitude as no-nonsense as its heroine, and it fits well with the Coen brothers’ style as much as Cormac MacCarthy’s “No Country for Old Men”.

The main accomplishment of the movie is that reminding us that, after all, the story belongs to Mattie Ross. Now a middle-aged spinster, Mattie tells us about how her hard journey in the past began through her opening narration. When she was a 14-year-old girl living with her family in their farm in Arkansas, her father went to Fort Smith for his business matter with one of his temporary employees Tom Chaney(Josh Brolin), who killed him when Mattie’s father tried to solve the dispute between Chaney and others over a card came at the bar. Chaney ran away from the town with her father’s gold pieces and horse, but none of the law enforcement officials in the town particularly cares about that because they already have lots of outlaws to deal with besides this petty criminal.

Instead of her fragile mom, Mattie, played by Hailee Steinfeld, comes to Fort Smith to sort out the family business. She is young and small, but she has worked as a bookkeeper for her father, and she has a shrewd business mind as well as indomitable determination based on her strong religious faith. She firmly takes care of her business matter with the horse merchant who makes a serious mistake of underestimating her from her appearance. Also, for immediately bringing justice to Chaney, she chooses to hire a Deputy US marshal known as the most ruthless one among her options – Rooster Cogburn(Jeff Bridges). When we and she sees him for the first time, he is testifying at the witness stand during the trial for the latest criminal apprehended by him. It seems that the arrest was not a wholly clean process, but the ends usually justify the means in this gritty world in the 19th century.

While accepting her offer, Cogburn does not like the idea of her going with him. He rather prefers to go with Laboeuf(Matt Damon), a Texas Ranger who is also interested in capturing Chaney for a different matter, to track down him in the Choctaw Indian territory where he hides along with the robbery gang led by “Lucky” Ned Pepper(Barry Pepper). However, Mattie is very determined about seeing their contract executed as promised and written, and Cogburn eventually accepts her, and they and Laboeuf begin their journey into the wilderness with potential dangers lurking in it. During this rough journey coupled with the conflicts between them, they begin to recognize each other while reaching for their common goal.

Comparing the Coen brothers’ version and the 1969 version, you will see how much the western films have changed during more than 40 years. The 1969 version can be considered as an old-fashioned entertainment even with the standard of its era due to the rise of the revisionist western movies including the great movies such as “The Wild Bunch”, which incidentally came out in the same year. After going through temporary depression in the 1970s-80s and following recent rejuvenation, the western films nowadays have a different flavor; their world is harsher, grittier, and more realistic than before. Although less shocking and bloody than Coen brothers’ twisted thrillers, “True Grit” also has a fair amount of violence while showing the time when the survival sometimes is the first priority above all else and the mercy cannot be easily afforded(“Ground’s too hard. Them men wanted a decent burial, they should have got themselves killed in summer.”) 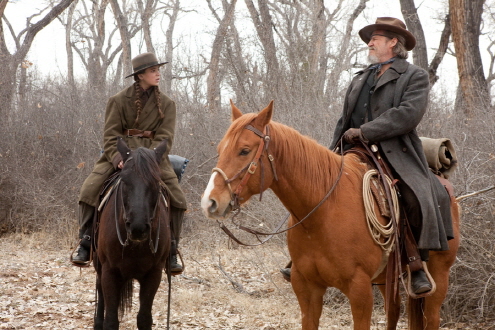 The Coen brothers are masterful storytellers. With their economical storytelling, they provide tense moments along with some humorous interludes like Rooster and Mattie’s encounter with the man wearing bearskin. They have been always good at setting the impeccably realistic backgrounds as the genres they handle require, and they excel at that again. Though the director Henry Hathaway did a good job in the 1969 version, Fort Smith and the wilderness depicted in that movie looks like the theme park on a sunny day compared to the realistic visuals of the remake version. For example, compare the shack sequence in the 1969 version with that of 2010 version. The latter is more violent, darker, and colder in its looks(it happens at night instead of under daylight). We get the sense that people really get hurt in its harsh world, and and the Coen brothers have some twisted fun with that.

The movie is quite impressive with its excellent production design and costumes, Carter Burwell’s memorable score mainly based on many traditional hymns including “Leaning on the Everlasting Arms”(too bad they do not have Best adapted score category at the Oscar any more), and the beautiful cinematography by Roger Dickens, who will probably, and finally, win an Oscar. It is almost crime that this great cinematographer has never won an Oscar while constantly getting nominated(he has been Oscar-nominated five times for the collaborations with the Coen brothers out of his nine nominations), and, for this time, he has a very good chance.

The actors are uniformly good or excellent. Jeff Bridges was Oscar-nominated again for his role after his Oscar win for “Crazy Heart” in last year, and he definitely deserves that. While Wayne assimilated Rooster Cogburn into his quintessential star performance, Bridges, another kind of star actor, unassumingly immerses himself into Rooster Cogburn. With mumbling voice and shaggy appearance and potbelly, you cannot help but think of Jeff “The Dude” Lebowski on western mod. Nobody can replace The Duke, but, what the hell, The Dude also can be cool by shouting to the bad guys bravely: “Fill your hands, you son-of-bitch!”.

The supporting actors are mostly better than their counterparts in the 1969 version. Matt Damon is curiously more restrained than Glen Campbell, but he ably supports his co-workers while taciturnly holding his place. Josh Brolin is both menacing and equally pathetic as a small-time outlaw. Barry Pepper is also good as a gang leader whose ragged face clearly shows the history of hard survival, while channeling some characteristics from Robert Duvall’s performance in the 1969 version.

And Hailee Steinfeld’s breakthrough performance is one of the best performances in last year. Although she was rewarded with Oscar nomination as a supporting actress, the movie belongs to her as much as Bridges. While surrounded by veteran actors, Steinfeld firmly holds the center and goes forward with confidence. Her acting is quite remarkable considering that the movie is her first feature movie(she was picked out of around 15000 applicants). In one scene, with her unflappable manner and no-nonsense mind, Mattie relentlessly corners the merchant with the common sense and logics and legal knowledge until he surrenders to her with no condition, and Steinfeld deftly delivers her lines while capturing wry, droll humor from her character’s prim attitude. Kim Darby was excellent in the 1969 version in spite of herself being around 20, but Steinfeld, as a child actor who is really 14, is far better and far more convincing as a strong-willed little girl who will not stop at nothing to see the justice done. She sees she is vulnerable in her world in the end, but she knows the lesson(“Nothing is free except the God’s grace”), and she never steps back with her strong belief. That is what Cogburn and Labeouf begin to respect, and, in exchange, she admits she initially misjudged them.

The Coen brothers score big again, and I am sure they will come back from the horizon again – with another surprise, maybe. They are never boring. Along with the biggest box office success in their career, “True Grit” is welcomed quite well by the Academy awards, nominated in 10 categories including Best Picture(Thanks to its success, it will probably be released in South Korea in late February or early March). I am a little hesitant about calling it as one of their best films, but the movie has everything we demand from an excellent western film, and I have no complaint about that – this is the remake/western film of the year. The Coen brothers make a better adaptation than the 1969 version, and, unlike its predecessor, it stays true to the original novel with a bitter, haunting poignancy in its ending; this is the story alive in Mattie’s memory while everything is gone into the past. This time, you will remember Mattie more than before along with Rooster and others.

This entry was posted in Movies and tagged Drama, Gun, Western. Bookmark the permalink.