“Candyman”(1992) is something we do not come across often. It is not only a scary movie but also an evocative horror movie with the intriguing idea about urban legends. We all know the urban legends have the roots in our collective fear of living anonymously in the cities, and the movie puts an interesting spin on it. What if some urban legend is real? And what if it’s possible that it is real because it is believed to exist, rather than the other way around? What if it gets the power from the collective belief? If such a thing is possible, then what can be said of the religious or supernatural entities people believe in? Can the same thing be said of them? The movie deals with its idea in a clever way, and it leaves us something to think after we are reasonably scared by the things happening on the screen.

It is always welcoming to have the characters who are reasonable in the horror movies, and Helen(Virginia Madsen) and Bernadette(Kasi Lemmons) are well-qualified for that. They are the graduates researching for their doctorial thesis at the University of Illinois, Chicago. Their research subject is the urban legend, and the one that particularly interests them is about Candyman, who people say will come to whoever dares to summon him by saying his names five times while looking at the mirror and will leave the bloody carnage behind him.

Like any other academic researchers, Helen and Bernadette don’t seriously believe what they hear from the interviews. But they become interested when they coincidentally come to know that Candyman is believed to exist by the people living in the Cabrini-Green Housing complex in Near North Side area of Chicago; they believe Candyman is living in one of those empty tenement. Helen thinks there are the materials worthy of their thesis, and she decides to delve deeper in this subject, despite Bernadette’s concern.

Her concern is well-justified. Now it is fading into the history by the on-going gentrification process, but Cabrini-Green has been one of the criminally notorious housing complex in USA. Through the movie, made in 1992, we get some glimpses of the environment far, far worse than now. The gang members hang around the front entrance of those coercively looking buildings, and there are dark, dirty, deserted places you do not want to go inside in the buildings. And we see our characters bravely go into these places with the intellectual interest and purpose.

The director/writer Bernard Rose, who would make “Immortal Beloved” after this movie, focuses on the atmosphere at the first half. He knows how to visually mount the unease on the screen. Frequent overhead shots have a subtle menacing tone with Phillip Glass’ effectively spooky score. The despair and terror are palpably felt in the corners in Cabrini-Green scenes, and, like Helen, we can see the real world is as horrible as the Candyman legend. This is the dangerous world in which terrible incidents happen and are neglected by the people outside including the police. People living there everyday may just choose to believe the boogeyman whom no one can stop is responsible for all these happenings.

But is it just an urban legend born out of the despair of the lower class? Helen seems to think so, but, unfortunately for her, the movie is based on the short story “The Forbidden” written by the executive producer Clive Barker, who was called “The Future of Horror” by Stephen King. Like his famous first movie “Hellraiser”(1987), Clive Barker’s horror stories are gruesome and brooding tales of flesh and blood with the supernatural elements, and “Candyman” is no exception. As you probably guessed it already, it turns out that Candyman is real, and the truth behind him is a lot more intriguing while quite horrifying in itself. It seems that Helen’s study makes Candyman piqued more than casually calling his names five times in the mirror. 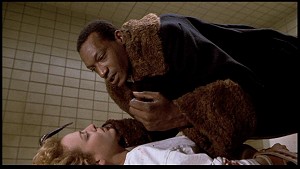 Helen eventually finds herself in a big serious trouble with the police while the shocking incidents happen around her. She knows what’s going on but she cannot say about it because nobody can believe her story. To make the matters worse, she is framed for the incidents and nobody believes her innocence – least of all her untrustworthy husband who never quite says he trusts her words. Following her ordeal, we see frightening things more than before. There is some blood to be shed, and Rose skillfully handles the violent moments while never losing the tension and dread piled upon from the start.

And he had the talented cast. Inexplicably, Virginia Madsen had never gotten the chance to fully utilize her talent till her Oscar-nominated performance “Sideways”(2004), and “Candyman” was one of few bright spots in her career before “Sideways”; she is good as a frightened but brave woman who tries to solve her impossible problem. Kasi Lemmons, who would direct “Eve’s Bayou” and “Talk to Me”, also makes a good impression as Helen’s best friend and co-writer. Tony Todd is seductively menacing as a dreadful entity with his hulking presence and deep voice(he would reprise his role in the following worthless Candyman sequels).

Even 18 years after it came out, “Candyman” still holds well as an effectively creepy movie. After the success of “Hellraiser”, several Clive Barker’s works have been translated into the movies for years, but this movie still occupies the top position among others. I think it is a lot better than “Hellraiser”, which just drones on the blood and other freakish things with some interesting ideas nearly untouched. “Candyman” has the interesting idea to explore, proceeds with it, and never loses the grip on the idea even when it goes bloody. In the end, even the expected horror movie cliché serves for its idea and provokes another thought in our head while the end credit rolls. Preposterous, yeah, but somehow it’s logical in its philosophy.