The Day Before the Ebertfest (April 20th) 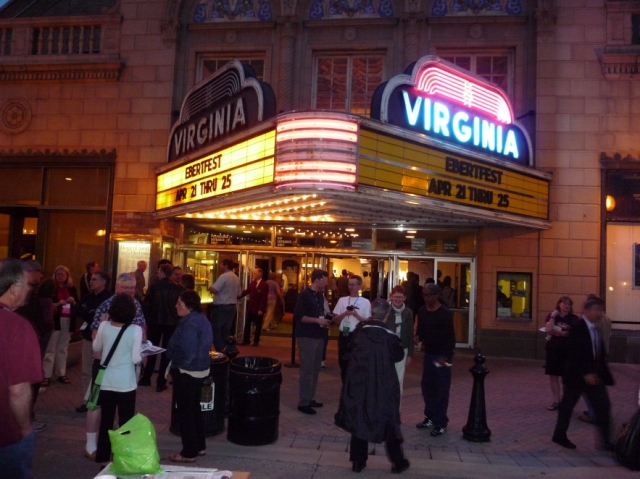 Maybe I tried to do too much. I tried to enjoy everything from both Chicago and Ebertfest. That was sometimes too much to handle. After being on high by sheer energy of Chicago for two weeks, my brain was immediately challenged by another huge wave of the stimulation from Urbana-Champaign. It was comfortable, but Ebertfest was far busier than I had thought and, again, I was at a loss several times during the festival. Without the help of people I met during the festival, I could have wasted lots of these precious moments of my life. Again, I‘m deeply grateful for their generosity toward an outsider who did not have even a cell phone.

On April the 20th, I woke up early for AM 7:11 Metra train. My original plan was going to Urbana-Champaign on Wednesday morning. However, after informed by Mrs. Ebert(Chaz) about the pizza party on Tuesday, I quickly changed my Amtrak ticket in previous week and notified Carol Iwata, Roger’s personal assistant, about the change in the schedule. The modification in my itinerary followed thanks to Mary Susan Britt. All that needed was not being late for Illini Train at AM 8:15 on my part, so it was very important not to miss AM 7:11 Metra train in Des Plaines.

After confirming that I did not overlook anything, I walked out the apartment building with the suitcase from the landlady(My suitcase was too big for this trip) on Tuesday morning. Metra train arrived at the station according to the timetable and I became less tense after getting on board. 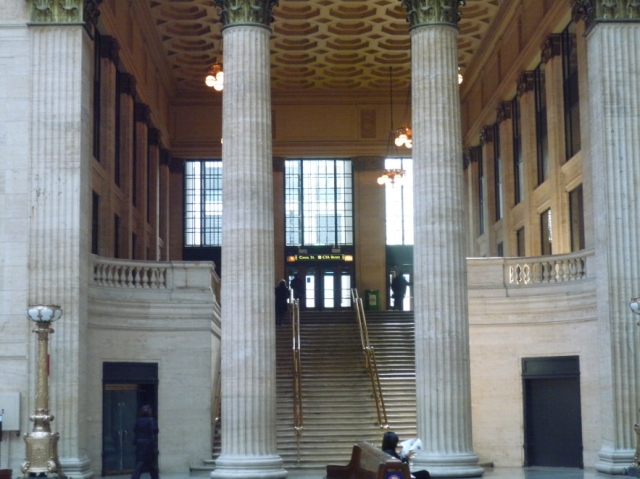 The Stairs of Union Station

I spent some free time at Union station while photographing its grandeur. Anyone familiar with Brian DePalma’s “The Untouchables” will recognize that stair when you pass into the front entrance of Union Station. However, there are two same stairs in Union building, and I wondered about which stair they recreated in the movie.

Between these two stairs, there is the gateway to platforms for Amtrak and the atmosphere is turned into something more contemporary. I held out ticket and passport, went through without problem, and sat comfortable into the seat few minutes later. The train began to move, and I saw my last sight of Chicago in daylight through the window. And then vast, endless plain was unfolded before my eyes. 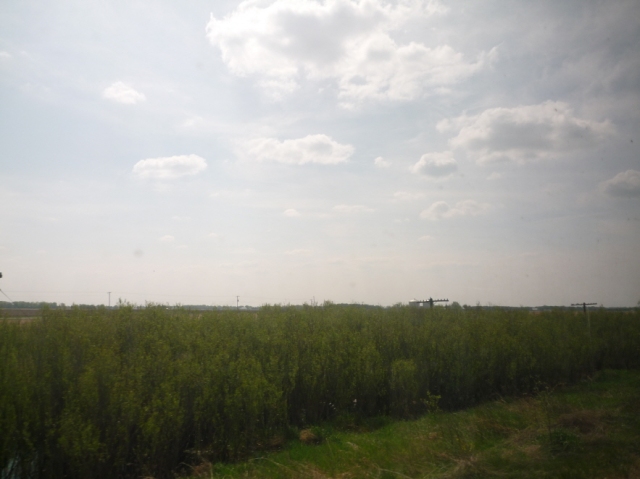 I learned another thing about US; Amtrak is not so punctual. After arriving in Urbana-Champaign about 45 minutes late, Carol and Mary Susan took me to Illini Union. I was given a quiet, clean room with twin beds, and the gift basket and goodies followed. My head had no idea about how to handle all these luxuries because I had never been treated like that before. The Gift Basket said, “You’re a Star!”. Well, 15 minutes would be extended to 5 days.

There were few hours left for pizza party at Cowboy Monkey, I decided to look around the University of Illinois during afternoon. Sometimes I came across Koreans during previous two weeks, but I could hear Korean far more often than before and I even found the ads in Korean on the board. On the last day of Ebertfest, one of the volunteers, a middle-aged man, told me he had learned Korean and said goodbye to me in Korean. Maybe I can move to this place if there is a right spot for me, but that’s too much idealistic imagination to me. 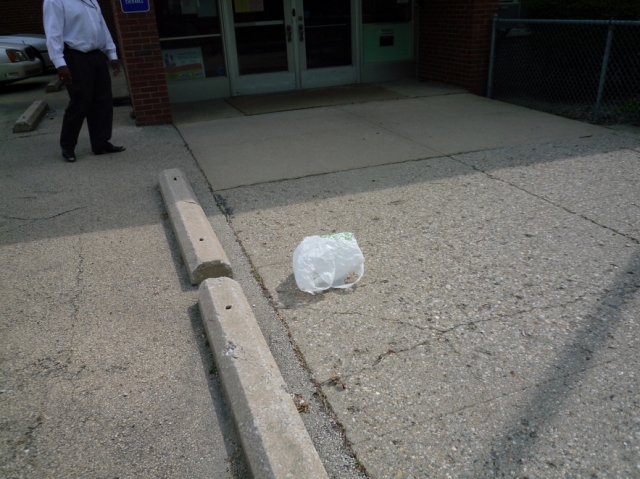 While my far-flung correspondent fellow Michael Mirasol from Philippine had a hell of time at the campus thanks to his host, I just wandered alone around the campus for getting accustomed to the environment. With Green Street and Union Illini as the center, I tried to make the basic map of this area in my head step by step while looking for anything worthy of my camera. I saw churches, laboratory buildings, the houses for students, and the commercial area depended on them. And I spotted one plastic bag on the road. Inspired by that Ramin Bahrani’s short film, I volunteered to be its master, but some security guard became its master.

When the time for pizza party came, I met my host Blake Stubbs. We had not talked much with each other after that day. However, Blake and I had a nice conversation about Korean movies while he drove me to the meeting place. He is a big fan of Korean films, and I told him about recent Korean movies of this year that seem to show the end of our prime. He said he liked Park Chan-Wook’s movies, and I told him that Park Chan-Wook hated Roger’s negative review for “Dead Man”. In his review, he liked almost everything Roger hated. Blake kept talking and I was busy with responding to him. I loved it. 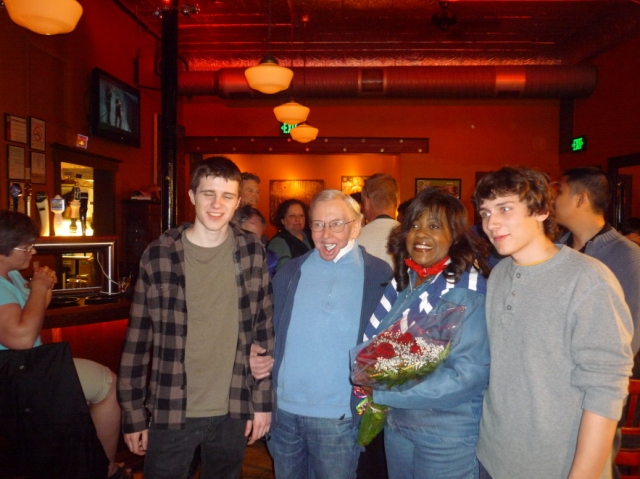 Many people had already come to Cowboy Monkey and pizzas were ready. Before 5 minutes were passed by, I came across Michael, and then met Gerardo Valero and his lovely wife Monica from Mexio City. This was the first time we had a real conversation and I became busy with responding while my topic were only Chicago and movies. And then, Roger(with Chaz and his nurse Milly as usual) came. The eyes of everyone were immediately focused on him and we were with him.

Everything after that is in blurred state in my memory. I remember TV reporter came to this place and had a interview with him. I learned later that she was not a just local reporter but a major one. And Vincent P. Falk, that unforgettably colorful guy, stands out in my blurred memory. He made a sneak attack with a funny joke by saying “Seongyong can Sing!”. No, No, No, Vincent. I and Vincent got along well with each other. We had a good ride together back to Illini Union, and he constantly made that famous spin move whenever he got the chance and that brought me a smile everytime. That was just start and I would see him everyday. 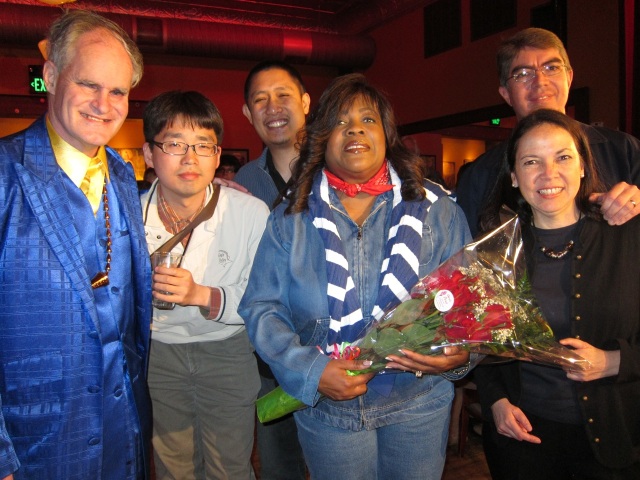 (from the left) Vincent, Me, Michael, Chaz, Gerardo & Monica

This entry was posted in Ebertfest and tagged Ebertfest. Bookmark the permalink.