“I’m No Longer Here”, which was released on Netflix in US and several other countries a few months ago, gives us a vivid glimpse into a Mexican subculture probably quite unfamiliar to many of you. Although I must point out that it sometimes stumbles in its binary storytelling, the movie is still packed with palpable verisimilitude and vigorous personality, and it is certainly one of more interesting offerings from Netflix.

The movie mainly revolves around the viewpoint of Ulises Sampiero (Juan Daniel Garcia Treviño), a 17-year-old boy who resided in Monterrey, Mexico before leaving for New York City as shown at the beginning of the story. Like many other illegal immigrants coming into the American society, he soon goes through a series of difficult moments as trying to settle in some neighborhood area of Queens, and his inability to speak English makes things all the more difficult for him, though he manages to earn his meager living as working with several fellow Mexican immigrant workers, who also provide him a place to live for now.

However, Ulises often finds himself ridiculed for his rather eccentric appearance and minor musical taste. His odd hairdo is surely the one drawing our eyes first, and he is also quite devoted to dancing to a certain type of Latin American music called “Cumbia”. He does not have much interest in other kinds of music, and his stubborn affection and devotion toward Cumbia later causes a big trouble for him when he is demanded to dance to the other type of music at one point. 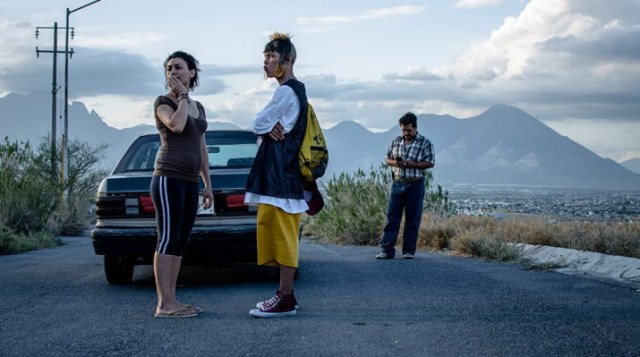 Meanwhile, the movie sometimes goes back to the time shortly before UIises’ departure from Monterrey. He usually spends days and nights outside along with a bunch of boys and girls who are as enthusiastic and passionate about Cumbia, and they and several other adolescent bunches in the city are a part of the local counter-culture called “Kolombia”. They often dance and listen to “Cumbia rebajada” (It is a slowed version of Cumbia, by the way), and the movie accordingly gives us a number of joyous moments of music and dance as Ulises, who is incidentally a very good dancer, and his bunch freely express their youthful energy.

Of course, Ulises and his bunch are not free at all from what has been going on in their slum neighborhood. While they merely extort a little money from kids outside school at times, they soon get involved with the members of some local drug cartel, and Ulises subsequently finds himself in a very serious situation after one shocking incident, which jolts us hard with a sudden act of ruthless violence and then chills us a lot as the camera is phlegmatically observing the aftermath for a while.

For his safety, Ulises has no choice but to flee to US, and it looks like he should stay there for a long time, but he cannot help but miss his hometown and all those good old times he had there along with his bunch. At one point early in the film, he calls his favorite local radio music program just for sending his message to his bunch, but the host of the program seems to be more focused on delivering the public messages from the Mexican government.

In the meantime, Ulises gets a little help from a few people who show him some generosity. There is a Columbian prostitute who is glad to listen to Cumbia along with him at a local nightclub by which he and other Mexican workers happen to drop at one night, and there is also Lin (Angelina Chen), who comes to befriend him as he temporarily works for her store owner great uncle. When he later sneaks upon the rooftop of the store building because he desperately needs any free place to stay, she happens to notice him, but, without telling her great uncle anything, she allows him to stay because she feels sorry and curious about him.

As Lin sincerely tries to connect with Ulises despite the language barrier between them, we sense a certain possibility of romance between them, but, no matter how much they respectively try, there is still a big gap remaining between them, and that aspect is more evident to us when she takes him to a party which does not interest him much from the beginning. Amongst strangers who do not speak Spanish and the music he does not like much, he feels more isolated and alienated than before, and that eventually leads to another moment of despair for him later in the film.

Although the screenplay by director/writer Fernando Frías de la Parra comes to lose its narrative momentum as trudging toward its arrival point during its second half, the movie keeps engaging us via its realistic sense of people and places, and cinematographer Damian Garcia did a commendable job of establishing authentic local moods on the screen while occasionally providing striking visual moments to remember. The main cast members including Juan Daniel Garcia Treviño, most of whom are non-professional performers as shown by a video clip shown at the very end of the film, are convincing and natural in their unadorned acting, and they are certainly impressive whenever they are required to dance in front of the camera.

Overall, “I’m No Longer Here” is worthwhile to watch mainly for several fascinating musical moments which pulsate with considerable raw energy. Although I think it could be improved via more focused narrative, it still draws our attention as a window to an unfamiliar life and culture to observe, and I do appreciate that a lot.

This entry was posted in Movies and tagged Crime, Dance, Illegal Immigrants, Music. Bookmark the permalink.