Surprise is always important for comedy to work well on audience, and Netflix film “Eurovision Song Contest: The Story of Fire Saga” has two moments which surprised me for making me chuckle a lot. Although I could clearly see in advance what would inevitably happen in both moments, they amused and tickled me more than I expected, and it is a shame that the rest of the movie is not as hilarious as them in spite of the diligent comic efforts from its two lead performers.

In this movie, Will Ferrell, who also serves as the co-producer/co-writer of the movie, plays Lars Erickssong, the latest example from Ferrell’s ever-growing menagerie of clownish man-child characters. Since he opened his eye to music thanks to a certain famous song by ABBA during his childhood period, this Icelandic dude aspires to compete at the Eurovision Song Contest, but his sincere aspiration does not get much support from others around him including his own father played by Pierce Brosnan, and only his childhood friend Sigrit (Rachel McAdams) takes his dream seriously as his sole close artistic colleague.

Of course, there comes an unexpected opportunity for Lars and Sigrit on one day. They happen to be selected as the one to fill the remaining one spot at the national singing competition which will decide who will participate in the Eurovision Song Contest on behalf of Iceland, and Lars is certainly excited for finally getting an opportunity for which he has wished for many years, though it goes without saying that he and Sigrit do not have much chance from the beginning.

As many of you have already expected, Lars and Sigrit inadvertently becomes a national laughingstock at the competition mainly thanks to Lars’ incorrigible goofiness, but, what do you know, something quite unfortunate suddenly happens not long after the competition is over. To the horror and disbelief of the staff members in the charge of the competition, that incidentally makes Lars and Sigrit the only eligible one to be sent to the Eurovision Song Contest, and Ferrell and Rachel McAdams aptly demonstrate their good comic chemistry in one of the two aforementioned comic moments.

After Lars and Sigrit arrive in Edinburgh, Scotland for attending the Eurovision Song Contest, the movie goes for more wackiness besides lots of required gloss and glamour. Compared to many of other competitors at the contest, Lars and Sigrit surely look silly and modest, and they are particularly awed and impressed by the bold flamboyance of Alexander Lemtov (Dan Stevens), a Russian singer who often wields his manliness in a rather telling way on and off the stage. As already shown from “Beauty and the Beast” (2017), Stevens is no stranger to singing grandly and loudly, and he is evidently having a ball here with his delightfully broad caricature role.

As Lemtov seems to be very interested in getting close to Sigrit in more than one way, Lars cannot help but become very uncomfortable. He and Sigrit have been reluctant to embrace whatever has been developing between them just because he puts his artistic success and recognition above all else, but now he comes to feel jealous and petulant, and that naturally leads to a series of childish behaviors we can expect from your typical Will Ferrell character.

The middle act of the movie often loses its narrative pacing as indulging in Lars’ pettiness and immaturity too much, but director David Dobkin, who previously collaborated with Ferrell and McAdams in “Wedding Crashers” (2005), keeps things rolling at least via a number of big performance scenes unfolded on the stage. Although they mostly feel as redundant as many of Ferrell’s usual schticks in the film, they look as grand and flashy as demanded, and they certainly function well as the solid ground for another disastrous stage moment for Lars and Sigrit, who is probably not aware of what happened to Isadora Duncan at the time of her very unfortunate death in 1927.

Around its third act, the movie comes to lose more of its comic momentum to my disappointment, and I think it could be vastly improved through cutting 20 minutes at most, but it is thankfully buoyed to some degree by Ferrell and McAdams’s comic chemistry. Although it is rather tiresome to see Ferrell staying on his usual comic persona these days (I really miss when he demonstrated his more serious side via “Winter Passing” (2005) and “Stranger than Fiction” (2007)), he is still a fine comedian, and he also wisely steps back a bit for McAdams, who effortlessly steals the show as willingly hurling herself into numerous silly moments along with her co-star. While she can certainly be quite serious as shown from her commendable Oscar-nominated supporting turn in “Spotlight” (2015), McAdams also has a natural gift in comedy as shown from “Mean Girls” (2004) and “Game Night” (2018), and she also nearly sells a romantic feeling between her character and Ferrell’s, even though the movie never makes it feel that convincing to us.

Overall, I cannot recommend “Eurovision Song Contest: The Story of Fire Saga” because it did not entertain me enough despite several good comic moments and Ferrell and McAdams’s comic chemistry. Yes, you may enjoy it more than me if you happen to have lots of spare time to kill, but I must point out to you that Ferrell and McAdams were respectively funnier in better comedy films such as “Anchorman: The Legend of Ron Burgundy” (2004) and “Morning Glory” (2010), and I would rather recommend these two comedy movies instead if you have not watched them yet. 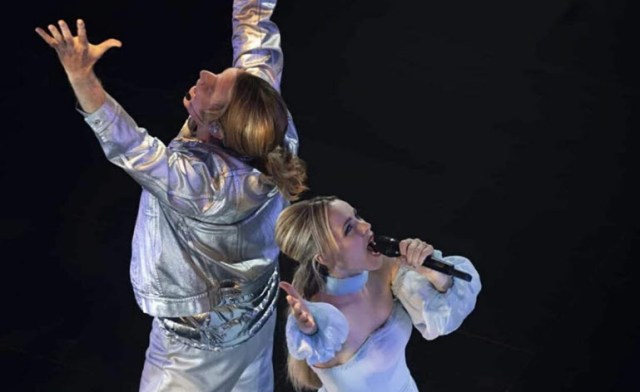 This entry was posted in Movies and tagged Comedy, Musician, Singer. Bookmark the permalink.

1 Response to Eurovision Song Contest: The Story of Fire Saga (2020) ☆☆1/2(2.5/4): Rachel McAdams shines in another usual Will Ferrell movie