“Futuro Beach”, a Brazilian-German film directed by Karim Aïnouz, is a dispassionate but interesting queer drama to observe and appreciate. Although it is often a bit too oblique and distant in terms of story and characters, the movie steadily engages us via its indelible style and mood, and you may come to admire how it subtly and thoughtfully presents the emotional tension among its three main characters.

At the beginning, we see a pair of German motorcyclists enjoying their time at Praia do Futuro, or Futuro Beach, of Fortaleza, Brazil. After riding their motorcycles across a wide sand field near the beach, these two guys promptly plunge themselves into the sea, but, unfortunately, they soon find themselves in a grave peril, and we get one of the most striking moments in the film as they desperately try to survive amidst a series of treacherous waves.

Fortunately, a lifeguard named Donato (Wagner Moura) swims to the rescue at the right time, but, alas, he only comes to save one of these two guys. When Donato later visits Konrad (Clemens Schick) at a local hospital for telling him more about this unfortunate incident and the following procedure, Konrad looks quiet but seems to be quite devastated about the death of the other guy, who was his old army buddy and was also supposed to run a motorcycle shop with him after returning to Berlin.

When Konrad is subsequently leaving the hospital for going back to his staying place, Donato offers a ride, and Konrad reluctantly accepts Donato’s offer. To our surprise, the movie instantly shows us their sweaty sex in Donato’s car, and you may wonder whether there is actually any particular sign of sexual attraction during their earlier scene at the hospital. 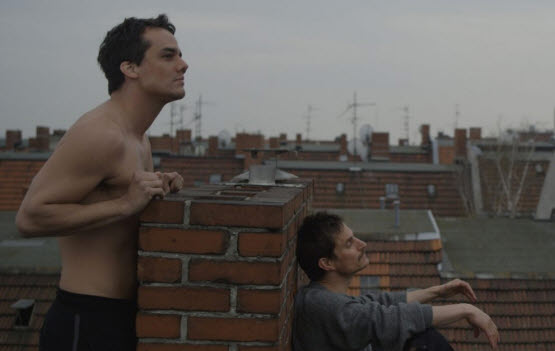 Anyway, the movie keeps maintaining its calm, detached attitude as Donato and Konrad becomes more attracted to each other. While the search for the body of Konrad’s dead friend seems to be going nowhere, they spend more private time with each other, and we are not so surprised when Konrad indirectly suggests that Donato should go to Berlin along with him.

Donato seems to be willing to leave along with Konrad, but he has an ailing mother and a little younger brother who has worshiped him. During a little intimate scene between Donato and his brother, it is apparent that both of them care about each other a lot, and we get a playful moment when Donato’s brother happens to spend some time along with Donato and Konrad, who kindly lets Donato’s brother ride his motorcycle for a while.

However, we also gradually come to sense Donato’s desire to get away from where he has grown up for years, and that is exemplified well by a wonderful visual moment which works as a crucial narrative point in the story. As going through a training session along with other lifeguards on the beach, Donato seems less enthusiastic than others, and his conflicted state of mind is clearly conveyed to us when the camera shows him being separated from others in the end.

And then the movie quickly moves onto its second act, which is unfolded in Berlin. Donato eventually leaves his hometown, and now he is living with Konrad somewhere in Berlin, but, despite their continuing romance, he is not exactly happy as everything is new and alien to him everyday. Thanks to cinematographer Ali Olay Gözkaya, the cold and gloomy atmosphere of Berlin makes a striking visual contrast with the warm and bright mood of Fortaleza, and we can really feel what makes Donato look sullen and depressed at times. As he glumly goes through the gray winter days of Berlin, he frequently finds himself missing the sunny beach of Fortaleza, and it is poignant to see him trying to quell his homesickness through his occasional fun times with Konrad.

Eventually, Konrad and Donato become more distant to each other, and there comes another crucial dramatic point where their complicated feelings are conveyed to us only via subtle nuances and gestures. Although it looks like their relationship is over, both of them still hesitate, and we are not so surprised by what happens between them in the end.

After that narrative point, the movie moves onto its third act. After several years, Donato is still living in Berlin, and we get a rather amusing scene when his younger brother, who now becomes a lad as tall as Donato, comes to where Donato currently works. As Donato has never come back to his hometown since he left along with Konrad, Donato’s brother understandably has lots of emotional issues with Donato, and Donato requests some help from Konrad, but the situation becomes more complicated when Donator’s brother later causes a trouble for both Konrad and Donato.

I will not go into details on what happens next, but I can tell you instead that the screenplay by Aïnouz and his co-writer Felipe Bragança smoothly glides from one moment to another as balancing itself well between humor and pathos. Thanks to Aïnouz’s competent direction and the good acting from his three main cast members, the finale is emotionally powerful even though nothing much is expressed on the screen except the foggy sense of uncertainty, and you will probably appreciate what has been carefully built up to that moment.

Overall, “Futuro Beach” is a typical arthouse film which demands some patience from you due to its slow narrative pacing and detached storytelling, so I think you should be well aware of what it is about as well as how it is about in advance. Yes, it is not exactly ‘entertaining’, but it succeeds as much as intended in my humble opinion, and it surely shows us that Aïnouz is another talented filmmaker to watch. 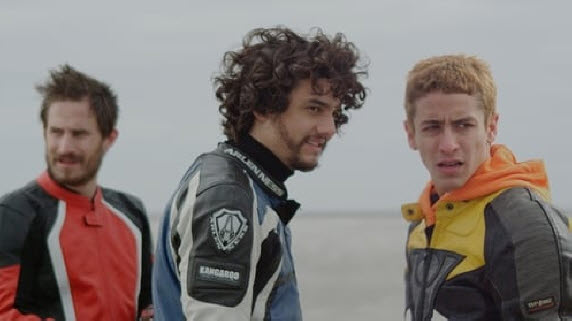 This entry was posted in Movies and tagged Brothers, Homosexuality, Lifeguard. Bookmark the permalink.