Kenya film “Rafiki”, which means ‘Friend’, is interesting to watch for several good reasons. While it drew lots of attention for dealing with a subject quite sensitive in Kenya (It was banned by the Kenya Film Classification Board (KFCB) before eventually being allowed by the Kenyan High Court to be screened for several days in the country, for example), the movie is a tender and charming coming-of-age drama packed with vivid cultural elements to be appreciated, and I was alternatively amused and touched even though I recognized its weak aspects from time to time.

At the beginning, we are introduced to Kena (Samantha Mugatsia), an adolescent tomboy girl living with her divorced mother in some neighborhood area of Nairobi. Like many other young women around her, she is expected to be a good wife someday, but she is not particularly interested in boys even though frequently hanging around with neighborhood lads, and she has hoped for something better for her life as aspiring to be a nurse in the future.

On one day, Kena comes across Ziki (Sheila Munyiva), the teenage daughter of a local politician against whom Kena’s father, who is currently living with his new wife, is competing in the upcoming election. Although their first direct encounter is not very pleasant, they soon become close to each other once Ziki apologizes to Kena, and we subsequently see them going around here and there in the city for having more fun together.

In the meantime, their friendship comes to be developed into something deeper than expected. At one point, they happen to be together inside an abandoned ban for avoiding sudden rain, and that is when Kena finds herself more aware of her growing sexual attraction to Ziki, who responds to Kena’s yearning stare with some caress. Although nothing much is done between them, they eventually move on the next logical step when they meet each other again in the abandoned ban, and the movie accordingly gives us a restrained but sensual moment as they hurl themselves into their mutual feelings.

Once they get romantically involved with each other, Kena and Ziki are constantly reminded of how difficult and complicated their situation is. Their ‘friendship’ has already been the talk of their neighborhood, and Kena’s father is not so pleased when he happens to witness what has been going on between his daughter and Ziki. While naturally concerned about how his campaign can be jeopardized because of that, he is not that angry about his daughter’s homosexuality at least, and he sensibly tries to persuade his daughter to stop meeting Ziki, though Kena only becomes more determined to follow what her heart wants than before.

In addition, Kena and Ziki has to deal with homophobia, which is pretty common around them. While they often see a young gay man insulted and ridiculed by some of Kena’s friends, they also have to endure the blatant anti-gay summon from a local preacher. Even at this moment, homosexuals can be heavily punished for having a sex in Kenya, and that was why the movie sparked lots of controversy in the country even though having the honor of being the first Kenyan film to be screened at the Cannes Film Festival.

While the story later becomes darker and gloomier as expected, the movie is still filled with vibrant spirit and energy, director/co-writer Wanuri Kahiu, who adapted Monica Arac de Nyeko’s short story “Jambula Tree” along with Jena Cato Bass, did a commendable job of filling the screen with palpable local atmosphere and details to be savored. While immersed in its plain mundane urban backgrounds, the movie often draws our attention with its striking utilization of colors, and I also like how it conveys to us the class gap between its two main characters via a number of notable details shown from their respective family residences. While Ziki lives in a luxurious apartment where she has her own place, Kena resides in a stuffy place where she is often stuck with her mother, and we come to understand more of her desire for a better life. 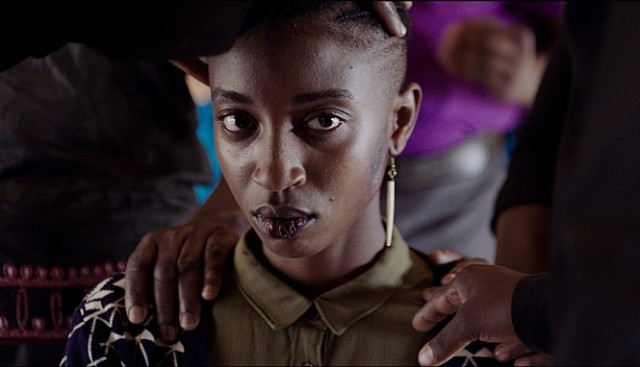 As the center of the movie, Samantha Mugatsia and Sheila Munyiva are believable in the dramatic development of their characters’ relationship, and they ably carry the film together as effortlessly complementing each other. While Mugatsia is terrific in her unadorned expression of the thoughts and feelings churning behind her character’s tentative attitude, Munyiva brings considerable pluck and sweetness to her more outgoing character, and it is always engaging to watch how these two wonderful actresses push or pull each other on the screen.

In case of the supporting performers in the film, they fill their broad caricature roles as much as demanded, and some of them contribute much to the colorful personality of the movie. While Jimmy Gathu is solid as Kena’s flawed but decent father, Neville Misati is also fine as an amiable lad who shows more kindness and generosity to Kena than expected, and Muthoni Gathecha is amusingly salty as a local gossipmonger.

Although it occasionally feels rough and heavy-handed in terms of storytelling and characterization, “Rafiki” will probably be remembered as an important milestone in the African movie history. Yes, it is pretty modest in its small forward step, but it is a big achievement nonetheless, and I sincerely hope it may lead to more African queer films in the future. 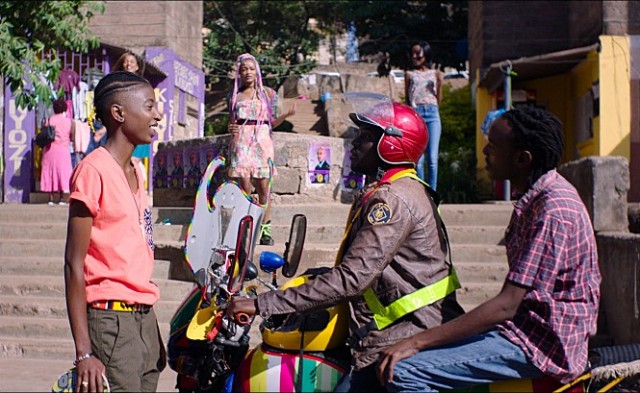 This entry was posted in Movies and tagged Coming-of-age drama, Friendship, Homosexuality, Lesbian. Bookmark the permalink.