Clint Eastwood’s latest film “The Mule” gave me a mixed impression. During its first half, it seems to want to be a low-key crime comedy drama about one unlikely drug runner, and there are several small amusing moments as it leisurely observes how its hero manages to get away with his criminal activity. During its second half, it comes to take a more serious tone along with somber sentimentalism, and I was a bit disappointed as watching it slouching toward its lackluster ending.

Eastwood, who looks more fragile and resigned than when he appeared in “Gran Torino” (2008) and “Trouble with the Curve” (2012), plays Earl Stone, a Korean War veteran who has devoted himself to horticulture for many years in Peoria, Illinois. During the prologue scene set in 2005, we see his career and business thriving along with another glorious moment for him, and we also observe what a lousy human being he is to his ex-wife Mary (Dianne Wiest) and their daughter Iris (Alison Eastwood). Just because he has to attend an important horticultural convention instead, he does not come to his daughter’s wedding, and we are not so surprised to learn that he disappointed and frustrated his family many times before while mostly occupied with his work.

The story subsequently moves forward to 2017, and we see how things have become quite difficult to Earl. Probably because of sticking to his old way of life and business too much, not only his house but also his business get foreclosed by a bank, and he is still not welcomed much by his family when he comes to a house party celebrating the upcoming wedding of his granddaughter Ginny (Taissa Farmiga), who is more generous to him compared to her mother and grandmother. 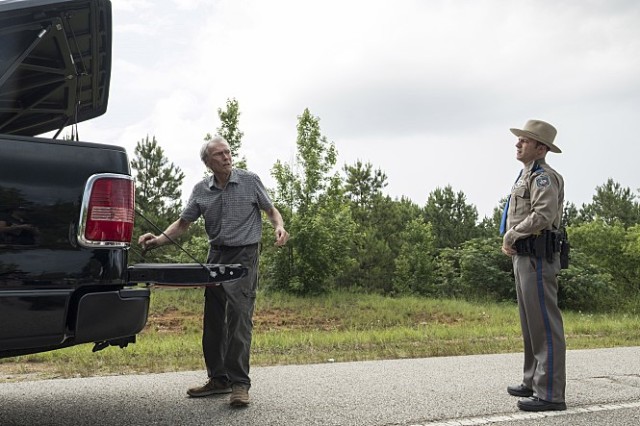 When he bitterly leaves the party, Earl is approached by a Latino guy who is one of party guests, and that guy has a small business proposition for Earl. Although he is not so interested in that proposition at first, Earl comes to accept it mainly because he really needs money now, and that is how he gets himself involved with a group of Latino thugs operating in El Paso, Texas. All they ask him to do is simply driving his old shabby truck from El Paso to Chicago with a certain bag put in the trunk of his truck, and he does not ask too much because, well, he gets paid as well as promised. As he receives more money through this supposedly simple job, he buys a new truck, and he also regains his house and business in addition to helping his family a bit.

While there later comes an inevitable point where he comes to face what he is exactly doing for his new business associates, Earl does not mind that at all, and the movie generates some dark amusement from how he does his job well as a drug runner. As a plain Caucasian octogenarian who always drives safely along the road, he does not draw any attention from the police, so he keeps doing the job without any particular trouble, and he soon comes to be regarded well by a Mexican drug organization for which he is working. At one point, he is even invited to the big mansion belonging to the boss of that drug organization, and he has some fun with two sexy and beautiful ladies in the middle of a hedonistic party held at that mansion.

Of course, as his criminal reputation grows day by day, Earl’s criminal activity comes to draw the attention of Drug Enforcement Administration (DEA). While DEA agent Colin Bates (Bradley Cooper) is quite determined to delve into the case as much as he can, he and his colleagues are still baffled about how more than 100kg of cocaine has periodically been delivered from Texas to Illinois without getting noticed by them at all, and there is an absurd moment when they fail to notice Earl even when he is operating right near them.

When the circumstance later becomes a bit more tense, the screenplay by Nick Schenk, which is inspired by Sam Dolnick’s New York Times article “The Sinaloa Cartel’s 90-Year-Old Drug Mule”, attempts a sentimental melodrama associated with its hero’s important personal choice, but the result is not that satisfying mainly because it does not establish enough emotional ground to engage us. While the expected moments of reconciliation between Earl and his family members feel rather contrived, the following anti-climactic finale is a little too loose and pedestrian to hold our attention, and we watch Earl from the distance without much care even at the end of the film.

Anyway, Eastwood, who is soon going to have the 89th birthday, carries the film well like Robert Redford recently did in “The Old Man and the Gun” (2018), and a number of notable performers around him fill their respective spots as much as they can, even though most of them are not utilized well on the whole. While Bradley Cooper, Michael Peña, and Laurence Fishburne are stuck with their thankless supporting roles, Alison Eastwood, who is Eastwood’s daughter, and Taissa Farmiga are also seriously wasted due to their underdeveloped characters, and Andy Garcia and Dianne Wiest manage to leave some impression as doing a bit more than required.

Although I often felt impatient during my viewing as constantly aware of its sluggish narrative pacing as well as its incoherent storytelling, “The Mule” is not as dull and tedious as “The 15:17 to Paris” (2018), Eastwood’s another film in last year. While I was not entertained enough for recommendation, I was not entirely bored at least, and I can assure you that you will not waste your money if you just want to watch what may be the last movie performance from Eastwood on the screen.

This entry was posted in Movies and tagged Crime, drug, Drug runner, Horticulturist. Bookmark the permalink.