Paul Greengrass’s new film “22 July”, which was released on Netflix yesterday, is a sobering docudrama on the 2011 Norway attacks. While it is often very uncomfortable to watch especially during its first part which shows us what happened on that terrible day, the movie thankfully avoids sensationalism as calmly and thoughtfully handling its subject, and there are several quiet but undeniably powerful moments to remember.

During the first half of the movie, we see Anders Behring Breivik (Anders Danielsen Lie), a right-wing extremist who was responsible for the 2011 Norway attacks, going through the last step of his horrible terror plan. After making his bomb at a barn outside Oslo on July 21st, 2011, he brings it to Oslo by his vehicle, and he parks that vehicle in front of one of the government buildings in the next morning. Not long after he drives away from the scene, the bomb is exploded, and now he is going to his next target: a camp for adolescents which is located in an island located outside the city.

In the meantime, we also watch how everything looks fine for everyone in that island on July 21st. After arriving in the island, many adolescent boys and girls cheerfully begin their first day in the camp, and they soon have a meeting where they make a speech about what they are going to do as future leaders. When they hear about the bombing incident in the next morning, many of them are certainly alarmed, and the camp staff members are relieved when they hear that a policeman is coming to the island for security.

However, that policeman in question is Breivik wearing a police uniform. Right after arriving in the island, he kills two camp staff members, and the following pandemonium unfolded on the screen is horrifying to say the least. As boys and girls are desperately running or hiding for their life, Breivik ruthlessly shoots down anyone within his shooting range, and there is a gut-chilling moment when he spews out his xenophobic/ideological hatred while killing a group of people hiding inside a camp building. 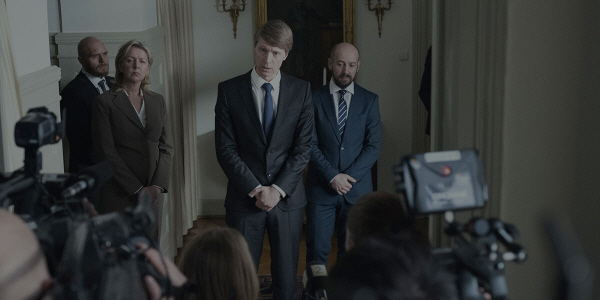 After Breivik is eventually arrested by the police who belatedly arrive in the island, the movie focuses on the aftermath via three narrative lines, and one of them mainly revolves around Jens Stoltenberg (Ola G. Furuseth), the Prime Minister of the Norwegian government. While shocked and surprised as much as others, Stoltenberg promptly makes a public statement as trying to keep the situation under control, and he also authorizes an independent investigation on how the attacks could happen. When it is later revealed by the investigation team that the attacks, which claimed a total of 77 lives while also injuring more than 200 people, could be prevented, Stoltenberg takes the responsibility for his government’s blunder without making any excuse, and he sincerely apologizes to the victims’ family members when they meet in private.

The second narrative line centers on Breivik’s trial. Quite ready for the trial from the beginning, Breivik chooses Geir Lippestad (Jon Øigarden) as his lawyer just because Lippestad once handled a case involved with some notable right-wing figure, and Lippestad is not so pleased about that. It is apparent from their first meeting that he abhors Breivik and everything Breivik stands for, but he maintains his cool professionalism nonetheless, and he tries to do his best for defending his despicable client even though he knows well that he will be as hated by many people as Breivik.

During the trial, Breivik initially pleads insanity as advised by Lippestad, but then he changes his mind, and he attempts to use the trial as a platform where his virulent ideology can get spotlights. While never overlooking his character’s human dimensions, Anders Danielsen Lie, who was unforgettable in “Oslo, August 31st” (2011), did a good job of subtly conveying to us his character’s vile, monstrous aspects, and we cannot help but disgusted more as watching his character trying to cause more damage to his society.

The third narrative line is about a teenage boy who survived during the attack in the island. Although he was pretty lucky despite being shot several times, Viljar Hanssen (Jonas Strand Gravli) has to recover from not only physical damages but also psychological ones, and there are a number of harrowing moments showing his difficult and painful progress to his recovery. His parents and his young brother, who was also in the island during the attack, try to help and support him as they can, but they are helpless as watching him struggle day by day, and that leads to considerable strain and conflict in the family.

Nevertheless, Hanssen gradually recovers in the end, and he also becomes quite determined to make a stand against Breivik’s evil through his court testimony. While never overemphasizing his bravery, the movie presents his court testimony scene with admirable restraint, and Jonas Strand Gravli is commendable in his unadorned natural performance which eventually functions as the heart and soul of the film.

Like Greengrass’s other docudrama films “Bloody Sunday” (2002) and “United 93” (2006), “22 July” is a visceral and thoughtful work packed with considerable realism and verisimilitude, and I admire what is achieved by Greengrass and his cast and crew. Yes, it is not something you want to watch again, but it is a powerful stuff nonetheless, and you will not forget it for a long time after it is over.