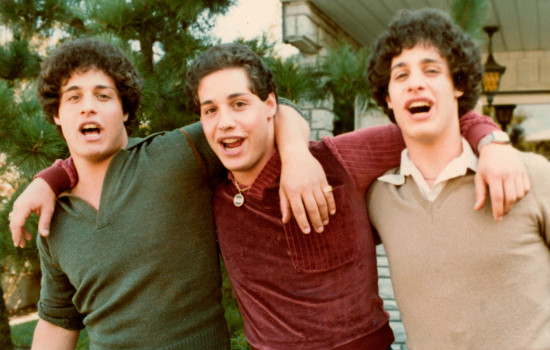 Documentary film “Three Identical Strangers” starts with an incredible real-life story and then reveals a far more unbelievable thing which remains shrouded in questions even at present. I will try not to reveal too much here in this review, but, just in case, I recommend you not to read the following paragraphs if you are going to watch the documentary.

If you have already seen the trailer of the documentary, you surely know that it is about three twin brothers who had never known each other’s existence before they accidently came to learn of a hidden fact about their birth. In the autumn of 1980, a 19-year-old lad named Bobby Shafran started his first semester at a community college located in the Catskills area, and he noticed something weird on his very first day at the college. Many students said hi to him even though he never met them before, and he became more puzzled as they kept calling him Eddy.

Shortly after he went to his dormitory room, Shafran came to see what was really going on. He somehow looked exactly like a student named Eddy Galland, and, through one of Galland’s friends, he soon contacted with Galland, who was at his family home at that time. As confirming that both of them were born on July 12th, 1961, they came to discern that they are identical twin brothers, and they became quite excited as getting to know each other more during their first encounter.

And then a more amazing thing happened when their dramatic story was subsequently reported on newspapers. David Kellman, the adopted son of a Jewish immigrant family living in New York City, was quite surprised when he read a newspaper article about Shafran and Galland, and he immediately approached to them. He also looked exactly like Shafran and Galland, and, surprise, it turned out that he was also born on the same day at the same hospital before sent to his parents via the same adoption agency which handled the adoption of Shafran and Galland. 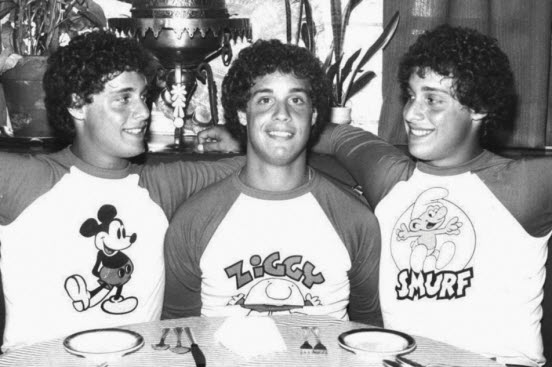 While these three identical twin brothers and their families were quite astonished by this incredible news, the brothers quickly drew far more attention from the media than before, and a series of archival footage clips show their sudden fame resulted from their unbelievable reunion. In addition to appearing in a number of TV talk shows, they had many wild nights in the downtown area of New York City as enjoying their new status as celebrities, and they later started a restaurant business together in the city, which was quite successful mainly thanks to their fame. In addition, they all got married and then began each own family life, and it seemed they would happily be together for the rest of their life.

In the meantime, the triplet’s parents were not so pleased as their adoption agency, Louise Wise Service, told them nothing at the time of adoption. When they went to the adoption agency together, they demanded the explanation for what exactly happened at that time, but they only received a formal apology, and it looked like the adoption agency was hiding something from them.

During its second half, the documentary goes further into what was possibly covered up by the adoption agency and some people associated with the adoption agency, and what is eventually presented to us is often disturbing to say the least, while also making us reflect on that interesting question on nature and nurture. Sure, the triplets had many common things between them despite their different childhood backgrounds, there were also considerable difference among them as pointed out later in the documentary, and we cannot help but notice how Shafran and Kellman look different from each other at present despite the remaining similarities between them. 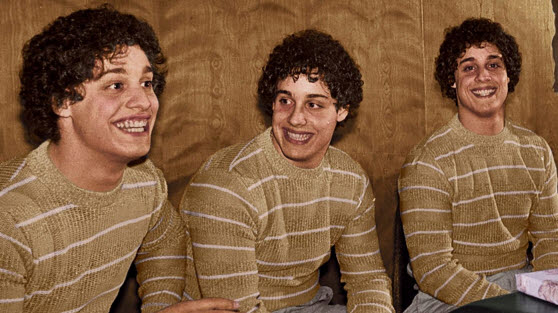 Both Shafran and Kellman want to know why they and their other twin brother came to be separated from the beginning, but, like their parents, they find themselves facing the dead end. Some clues may be found from the certain records stored in the archive of Yale University, but these records in question have remained sealed from public, and it turns out to be pretty difficult to get a permission to access to these records.

While the exact purpose behind their separation is still vague even at present, the documentary suggests that the triplets were considerably affected by their separation in one way or another. They often became anxious during their infant period probably because of being separated from each other, and they all had each own dark time as struggling with their respective mental problem, which might have been inherited from their biological mother. In case of Galland, he had a pretty hard time when the relationship among him and his two twin brothers later became quite deteriorated due to the growing conflict among them, and that eventually led to a hurtful moment for everyone close to him.

“Three Identical Strangers”, which won the Special Jury Prize when it was shown at the Sundance Film Festival early in this year, becomes less compelling as making its points a little too often during its second half, and it also stumbles a bit in its rather plain storytelling approach, but it is still engaging thanks to director Tim Wardle’s deft mix of interview and archival footage clip. In short, this is a fairly good documentary which raises some thought-provoking questions via its unforgettable human subjects, and I assure you that you will have an entertaining time with it. 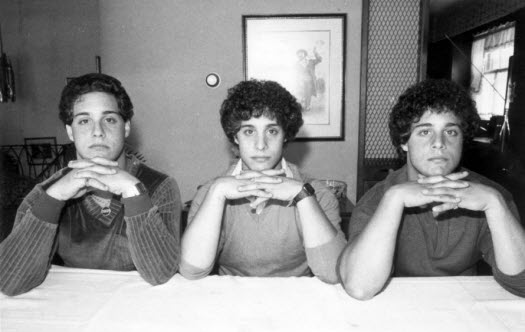 This entry was posted in Movies and tagged Adoption, Documentary, Real-life story, Twin. Bookmark the permalink.