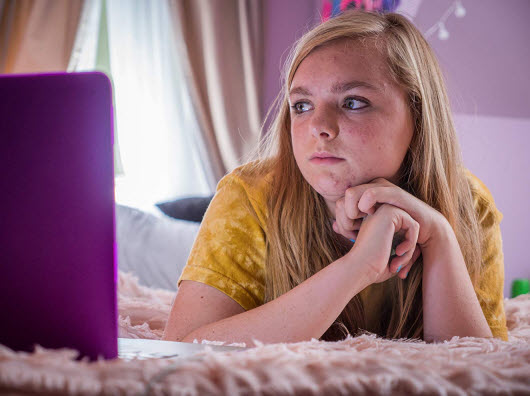 I like movies making me emphasize with people different from me, and “Eighth Grade” is one of such good films. Although its teenage heroine’s tumultuous emotional journey feels rather alien to me because my adolescent years were less eventful in comparison, the movie made me feel and understand her angst and confusion via its sensitive and humorous depiction of her emotional struggle for being herself, and I found myself rooting for her a lot as watching her arriving at another turning point of her adolescent life.

When we meet Kayla Day (Elsie Fisher) for the first time, she is making a YouTube video in which she talks about many things including how to be cool and confident in front of schoolmates, but, not so surprisingly, this middle school girl who is about to finish her eighth grade year turns out to be anything but cool and confident. At her school, nobody pays attention to her much as she is usually shy and passive, and she certainly feels ashamed when she is selected by her schoolmates as the quietest girl in the school. At least, she has a supportive father who has raised her since her mother was gone several years ago, but they do not interact much with other despite his sincere attempt to get closer to his daughter. During their dinner, he wants to talk more with his daughter, but she is mostly occupied with her smartphone, and that results in a very awkward moment between them.

Meanwhile, Kayla happens to be invited to the birthday party of a popular girl in her school. While she surely wants to get along well with that popular girl and other schoolmates invited to the party, she does not know how to do that, so she becomes quite anxious as she is taken to the party by her father, and we get a cringe-inducing moment as she tentatively approaches to her schoolmates at the party. Like any introverted teenagers, she is not so comfortable with herself, and her insecure mood is visibly contrasted with many boisterous activities happening around her. 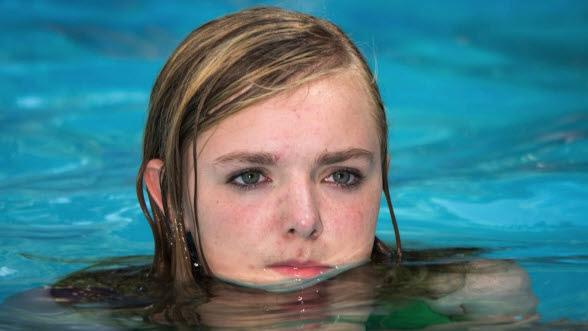 However, Kayla cannot help but enthralled when she sees a handsome boy on whom she has a crush for a while. After the accidental encounter between them during the party, she decides to go a bit further toward him, and we get an amusing moment when she inadvertently comes to promise to him that she will do a certain act of sex for him although she has never done that before. She later searches the Internet for finding, uh, a guideline, and that leads to one of the most hilarious moments in the film.

In the meantime, the days of her eighth grade are being over, and we see Kayla and her schoolmates taken to a nearby high school for getting to know what it feels like being at high school. She is soon assigned to a generous high school girl who is quite willing to talk about anything with her, and she certainly feels excited as finally finding someone who is not only cool but also friendly to her. When she later talks more with that high school girl, she invites Kayla to a meeting with her high school friends, and Kayla does not hesitate at all to accept the invitation.

When she meets her new friend and other high school kids, Kayla is eager to learn more from them, and we observe with amusement how she is often overwhelmed by the dynamic interactions unfolded in front of her. In her view, they all look quite confident about themselves, and she only finds herself becoming passive and quiet as usual as trying to follow whatever is being exchanged between them.

The movie later takes a sobering narrative turn when Kayla is being taken back to her home by one of these high school kids, who seems nice at first but then approaches to her a little too closer at one point. As feeling quite uncomfortable, she comes to see how vulnerable and unprepared she is, and she consequently feels quite hurt and humiliated, though she avoids the worst possible outcome from that painful moment at least. 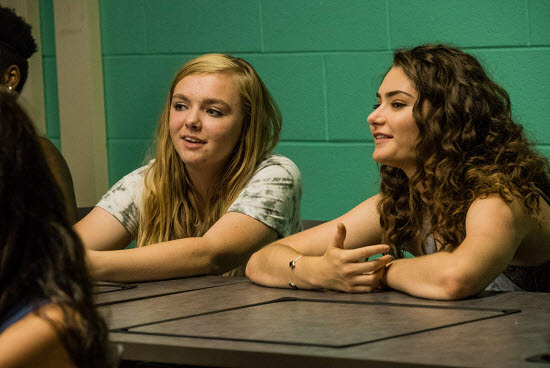 While emphasizing with its heroine’s pain and confusion, the screenplay by director Bo Burnham smoothly moves back and forth between comedy and drama, and there are many small nice moments which give us a vivid, realistic glimpse into your average middle school life. I like a scene involved with a time capsule box which Kayla prepared during her sixth grade year, and I also appreciate a wryly humorous moment showing Kayla and her schoolmates going through a certain type of drill under the guidance of a police officer.

Burnham also draws good performances from his main cast members. Elsie Fisher, a young actress who previously did a voice performance in “Despicable Me” (2010) and its 2013 sequel, is simply terrific in her unadorned acting, and I hope her likable performance here in this film will lead to more good things in her promising acting career. Other performers in the film are also believable in their respective roles, and the special mention goes to Josh Hamilton, who plays Kayla’s patient and understanding father and has a very poignant moment when his character comes to have a frank conversation with his daughter.

In conclusion, “Eighth Grade” is a superlative coming-of-age drama which reminds us of how it is often hard and difficult to grow up during adolescent years. This is surely one of better adolescent movies during recent years, and, in my inconsequential opinion, it deserves to be watched by many adolescent kids out there for good reasons. They will recognize themselves from Kayla, and they will see they are not alone at all. 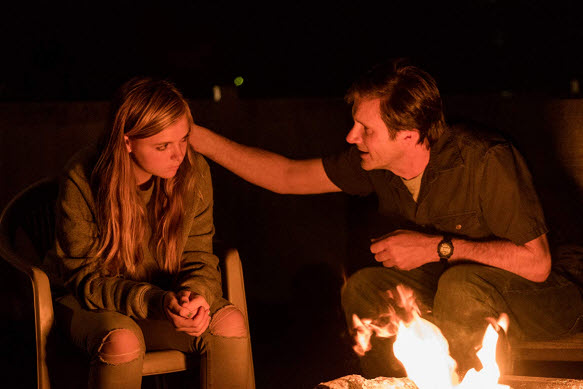 This entry was posted in Movies and tagged Adolescence, Coming-of-age drama, Middle School. Bookmark the permalink.