HBO documentary film “Jane Fonda in Five Acts” is a compelling examination of the life and carrier of Jane Fonda, a famous movie star who has also been an outspoken activist for many years. As she frankly recounts about her eventful past in front of the camera, the documentary gives us a vivid, honest, and respectful portrait of a woman who has constantly tried to be true to herself throughout her life and career, and it is engaging to observe how she has steadily kept on for being a strong, independent woman.

The documentary presents Fonda’s life and career via five acts, and the first act is titled “Henry”. As many of you know, Fonda was the daughter of legendary actor Henry Fonda, and she tells us about her rather distant relationship with her father. While he usually represented those wholesome American values on the screen, her father was not a very good father to Fonda and her brother Peter, and her mother’s worsening mental illness added more unhappiness to Fonda’s childhood years. When her mother committed suicide not long after her father married other woman, her father did not tell anything about that to his children, and Fonda belatedly came to learn of the truth about her mother’s death several years later.

Often overwhelmed by her father’s public image (“I grew up in the shadow of a national monument”, she says at one point), Fonda tried to earn her father’s affection and recognition, and that eventually led her to acting. Although she was not particularly interested in acting during her childhood years, she came to study under renowned acting teacher Lee Strasberg as entering her adulthood, and she remembers how much she was terrified when she was instructed to show her acting talent in front of other students on one day. She was afraid of getting humiliated, but she got some recognition from her teacher, and that made her more far confident than before.

As working as a model in New York City during the early 1960s, Fonda slowly got more recognition as a young promising actress who would follow her famous father’s footsteps. While appearing in several notable American films including “Barefoot in the Park” (1967), she decided to expand her range further, so she went to France, and that was where she met her first husband Roger Vadim, a famous French filmmaker who had been quite prominent thanks to a number of popular films such as “And God Created Women” (1956). 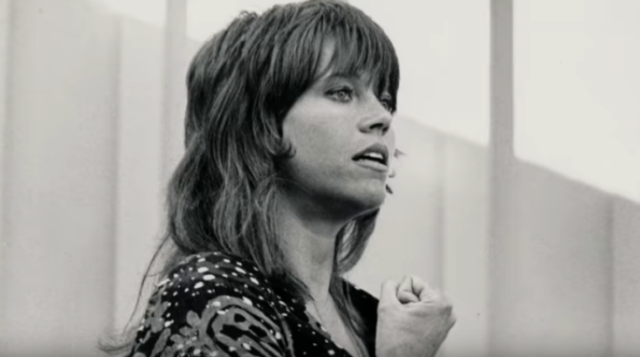 The second act, titled “Vadim”, looks into Fonda’s relationship with Vadim, and Fonda reminisces how much she was enthralled during her first encounter with him at Maxim’s. While well aware of his notorious reputation due to many women in his life, she could not help but charmed by him, and Vadim was also attracted to her a lot. They married in 1965, and Fonda appeared in Vadim’s several films including “La ronde” (1964), “La curée” (1966), and, yes, “Barbarella” (1968), a camp classic film which has the amusing opening sequence where Fonda cheerfully presents her naked body.

Around the late 1960s, Fonda came to be more conscious of what was going on in the American society. While the Vietnam War became worse and worse outside, the American society went through many tumultuous political moments, and Fonda came to feel that she had to do something about that. As participating in many political activities, she became more vocal about her opinions on the Vietnam and other political issues, and that accordingly caused more conflict between her and her father, who even warned her that he would report her to authorities if he ever found out that she was a communist.

Meanwhile, she kept advancing in her acting career. After getting her first Oscar nomination via her devastating performance in Sidney Pollack’s “They Shoot Horses, Don’t They” (1969), Fonda triumphed again with Alan J. Pakula’s “Klute” (1971), for which she received her first Oscar. During the shooting of “Klute”, she felt that she was not suitable for her role, but she came to delve deeper into her role with the strong support from Pakula, and the result was one of the most fascinating performances in her career.

After being separated from Vadim, Fonda began a relationship with famous left-wing activist Tom Hayden, and the third act, titled “Tom”, examines how Fonda was swept further into her political activities. When she visited Hanoi in 1972, she surely caused a huge controversy as making lots of enemies, but she adamantly stuck to her position, though she later admitted that she was rather careless while visiting Hanoi and then defending her political opinion.

Around the 1980s, Fonda and Hayden began the Campaign for Economic Democracy, but they did not have enough money, and then Fonda got a brilliant idea for financing their campaign. Because she knew well about workout, she decided to make a workout video, and, to her surprise and amusement, her workout video turned out to be a lot more successful than imagined.

However, Fonda and Hayden eventually divorced in 1990, and then Fonda married someone who was quite opposite to Hayden: Ted Turner. During the fourth act, titled “Ted”, Fonda tells us how fun and exciting it was for her to be with her third husband who is incidentally one of the wealthiest persons in the world, and we later see her visiting a farm owned by Turner, who still remains as a good friend of hers despite their eventual divorce in 2001.

After her third divorce, Fonda came to resume her acting career which was stopped during her third marriage, and the fifth act, titled “Jane”, shows us how she has been active during recent years. For example, she recently received considerable praises for her supporting turn in Paolo Sorrentino’s “Youth” (2015), and she is currently appearing with her longtime friend Lily Tomlin in TV series “Grace and Frankie”. In case of her private life, she has been quite comfortable with who she is and where she is now, and there is a warm, intimate scene where she shows a bit of her life to one of her grandchildren.

Although it feels a little overlong at times, “Jane Fonda in Five Acts” is an excellent documentary which is both engaging and insightful, and director Susan Lacy did a commendable job of presenting her subject with honesty and admiration. While she is about to have her 81st birthday, Fonda is willing to go further with the last chapter of her life, and I am sure it will be interesting as before to see what may come next from this great American actress who is also a passionate activist to remember.