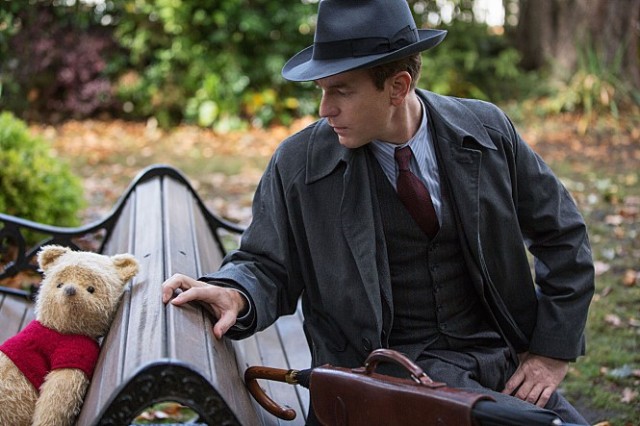 “Christopher Robin”, a live-action film inspired by Walt Disney’s beloved animation film franchise which is based on A. A. Milne and E. H. Shepard’s book “Winnie-the-Pooh”, frequently clashes with my fond memories of Winnie the Pooh, who has been known to me and many others in South Korea as “Winnie the Teddy Bear”, and his toy animal friends. Although it shows some humor and spirit at times, the movie mostly feels moody and melancholic, and it is also often hampered by its clichéd plot and thin characterization. When I walked into the screening room early in this morning, I hoped that my sleepy mind would be rejuvenated during the screening, but I only came to leave the screening room without much satisfaction, and now I am left with a rather hollow impression.

Not long after that, Robin is sent to a boarding school, and we soon come to observe several years of adult Robin (Ewan McGregor). He marries a young woman with whom he instantly falls in love right from their first encounter. He gets enlisted in the army when World War II begins, and he experiences some pretty tough moments on battlefield. When war is over, he comes back to his wife and his young daughter, and then he begins to work in a big suitcase company in London.

Now Robin is the manager of a department of the company, but things have been not that good for him and others his department. His direct boss has been demanding that he should give a solution for the ongoing sales problem of the company as soon as possible, and that means Robin may have to fire some of people working under him. As Robin becomes more occupied with his work, he finds himself more distant to his wife Evelyn (Hayley Atwell) and his daughter Madeline (Bronte Carmichael), and Evelyn and Madeline are quite disappointed when they learn that they will have to spend the upcoming weekend outside London without him.

After Evelyn and Madeline leave, Robin focuses on his work as usual, but then something unexpected happens. Pooh suddenly comes to see him, and he wants Robin to help him find other toy animal friends in the Hundred Acre Wood. Although he is understandably shocked and flabbergasted at first, Robin lets Pooh stay in his house for a while, and he later goes back to the Hundred Acre Wood along with his old friend for taking care of their matter, though his mind is still occupied with his company work.

As Robin enters the Hundred Acre Wood again, the movie attempts to conjure some sense of magic and wonder, but the result does not have enough charm to engage us. While the Hundred Acre Wood in the movie often looks plain and drab, the toy animal characters in the film somehow look less cheery compared to their endearing animation versions, and that aspect further sinks the film into its glum atmosphere pervading the screen.

Anyway, the performers who provide the voices of toy animal characters in the film do as much as they can do for bringing life and personality to their respective roles. Jim Cummings gives an adequate voice performance as Pooh, and he also did a fairly good job as Tigger, but I must confess that Tigger’s rather shabby appearance in the film made me miss a lot his animation version, who is a lot more colorful and spirited in comparison. While Nick Mohammed is suitably neurotic as Piglet, Peter Capaldi is appropriately cranky as Rabbit, and Toby Jones, Sara Sheen, and Sophie Okonedo are well-cast on the whole although they are relatively under-utilized.

The standout voice performance in the movie comes from Brad Garrett, who is quite effective as Eeyore, an ever-depressed toy donkey who is as gloomy and pessimistic as I was during many bad days of my life. Steadily sticking to his character’s melancholic nature which is somehow funny and likable, Garrett did a good job of delivering a few amusing moments in the film, and you may want to have Eeyore more than any other toy animal character in the movie.

In case of Robin and the other human characters in the movie, they are less interesting as merely being flat archetype characters. Ewan McGregor fills his role as much as he can with his engaging screen presence, but the screenplay by Alex Ross Perry, Tom McCarthy, and Allison Schroeder, which is developed from the story by Greg Brooker and Mark Steven Johnson, does not provide enough human dimension for his character, and I was only reminded again that Christopher Robin is the least colorful character in the Hundred Acre Wood. In case of other performers including Hayley Atwell, Bronte Carmichael, Orton O’Brien, and Mark Gatiss, they are mostly limited by their superficial roles, and that is one of the main reasons why the finale does not work as well as intended.

“Christopher Robin” is directed by Marc Forster, who drew attention from me and others via several excellent films such as “Monster’s Ball” (2001), “Finding Neverland” (2004), “Stranger than Fiction” (2006), and “The Kite Runner” (2007). He is a good filmmaker and “Christopher Robin” is entirely devoid of charm and magic thanks to his competent direction, but I still remain disappointed and dissatisfied, so I recommend you to watch animation feature film “Winnie the Pooh” (2011), which is a lot more charming than this meandering misfire.