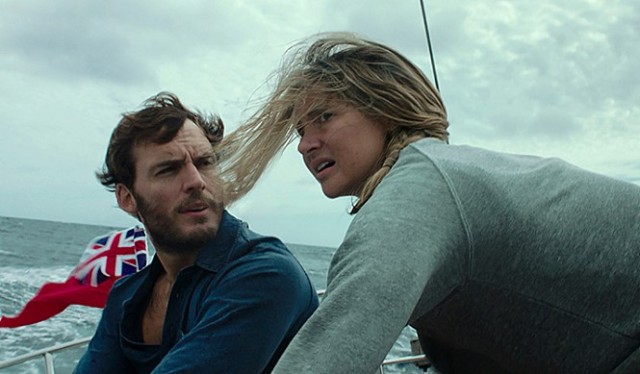 As your average survival drama movie, “Adrift” did its job as well as expected, but it somehow did not engage me enough during my viewing. While it is surely a well-made work which is also supported well by its lead performer’s good performance, the movie also feels rather plain and conventional compared to some other recent survival drama films, and I cannot help but wonder whether it could be better.

Based on the nonfiction novel “Red Sky in Mourning: A True Story of Love, Loss, and Survival at Sea” written by Tami Oldham Ashcraft and Susea McGearhart, the movie gives us a fictionalized version of the unbelievable real-life story of Tami Oldham (Shailene Woodley). In 1983, this 24-year-old American lass and her British boyfriend/fiancé Richard Sharp (Sam Claflin) embarked on their long-distance sailing across the Pacific Ocean for delivering a yacht to San Diego, California, but they happened to sail right into a big hurricane in the middle of their journey, and Oldham subsequently found herself in a very desperate situation which she endured for no less than 41 days before eventually being rescued (this is not a spoiler at all, you know).

At the beginning, we see Oldham regaining her consciousness in the yacht which is severely damaged by the hurricane. While there are maps and some basic tools for navigation at least, she only knows what she learned a bit from Sharp, who is nowhere in her sight at present. As realizing how helpless she is as being adrift in the middle of the Pacific Ocean, she becomes more frustrated and despaired, but it is clear to her that she must do anything for her survival, and she soon begins to do whatever is necessary for increasing her chance for survival.

This terrible circumstance of hers is intercut with a series of flashback scenes which show us how Oldham came to fall in love with Sharp. Not long after she arrives in Tahiti, she happens to encounter him while working for earning more money for her ongoing trip around the world, and something is instantly and mutually felt between them during this accidental encounter of theirs. As spending more time together as fellow free spirits, they become more attracted to each other, and there is a lovely scene where Oldman shows Sharp her favorite spot somewhere in the island.

While they continue to enjoy their heavenly days of romance, there comes an offer from an elderly British couple close to Sharp. Like Sharp, they have been enjoying the sailing around the world, but now they must go back to London right now due to a personal matter, and they ask Sharp to deliver their yacht to San Diego for them. Because they are willing to give no less than $10,000 along with two first-class plane tickets for going back to Tahiti after the delivery, Sharp does not hesitate much to accept their offer, and Oldham is persuaded to go along with him although she is initially reluctant.

Things look fine and wonderful as they sail away from Tahiti, and Oldham is delighted when Sharp later proposes to her, but, of course, there eventually comes that dreadful moment as they receive an unexpected hurricane warning from the radio. They think they can avoid the hurricane, but, alas, they soon find themselves inside the hurricane, and the movie vividly depicts that perilous moment with all the sound and fury it can generate.

Meanwhile, we also observe how the circumstance becomes gloomier day by day for Oldham after the hurricane. At one point, she fortunately spots Sharp hanging on a small boat which has been floating near the yacht, and she immediately takes him up to the boat, but he is seriously injured and there are not many things she can do about that.

Nevertheless, Oldham does not give up hope for them. Using maps and navigation tools, she discerns their exact location in the Pacific Ocean, and she comes to decide to sail to Hawaii instead of San Diego. That course is much riskier, but they can have more chance for survival at least, and she is willing to take a chance with that course.

The movie depends a lot on Shailene Woodley’s acting, and Woodley, an engaging actress who came to draw our attention through her wonderful supporting turn in Alexander Payne’s “The Descendants” (2011) and recently received lots of praises for her excellent performance in HBO TV miniseries “Big Little Lies”, is convincing as her character struggles more for survival along the plot. Although he does not have many things to do compared to Woodley, Sam Claflin clicks well with his co-performer on the screen, and I enjoyed the warm, sweet sense of intimacy which is palpably felt from their scenes unfolded in Tahiti.

“Adrift” is directed by Baltasar Kormákur, an Icelandic director who previously made “Everest” (2015). Like that film, which is also based on a grueling real-life survival story, “Adrift” is competent in technical aspects, and I particularly appreciate a number of breathtaking visual moments provided by cinematographer Robert Richardson. The movie surely reminded me again that I really do not like being in the middle of the sea, but I still think it could be as bold as “All Is Lost” (2013), which did a more impressive job in my inconsequential opinion. While I still remember those memorable moments in “All Is Lost”, I doubt whether I will remember what I saw from “Adrift” for a long time.