Sometimes I come across films which are commendable in technical aspects but unsatisfying in terms of story and characters, and Hungarian film “Jupiter’s Moon” is one of such disappointing examples. I was impressed by a number of technically superlative moments in the film, but I also felt impatient and frustrated due to its weak plot and uneven storytelling, and I just found myself baffled and dissatisfied around the end of the movie. While it attempts to make some points on its social issues, it fails to generate something coherent enough to hold our attention, and those good moments in the film only remind us of how it could be better through more focused narrative and more solid characterization.

The opening sequence, which is incidentally one of the best parts in the film, shows a bunch of refugees trying to cross the border region between Serbia and Hungary during one late night. Once they all gather at a riverside spot, they try to go across the river by several small boats prepared for them, but then they are soon ambushed by the Hungarian border patrol, and the movie instantly thrusts us into the ensuing chaos via the viewpoint of a young Syrian refugee named Aryan Dashin (Zsombor Jéger), who becomes separated from his father during this chaotic moment. As he tries to get away from the Hungarian border patrol, the camera fluidly and urgently moves along with him and many other fleeing refugees, and the sequence eventually culminates to a striking moment as his flight is stopped by a police officer named László (György Cserhalmi), who shoots Aryan several times without much hesitation.

At first, it looks like Aryan is fatally wounded, but then an inexplicable thing happens. He somehow comes to obtain the supernatural power to levitate, and the movie gives us a nice moment of awe and mystery as the camera smoothly floats along with Aryan’s body in the sky. Cinematographer Marcell Rév, who previously collaborated with director Kornél Mundruczó in “White God” (2014), did a tremendous job here in this film, and his masterfully effortless camera work from the numerous long-take shots in the film will probably remind you of what Emmanuel Lubezki achieved in Alfonso Cuarón’s “Children of Men” (2006) and “Gravity” (2013)

Not long after he falls to the ground, Aryan is sent to the hospital inside a camp for refugees being held by the Hungarian government, and that is how he comes to encounter Gábor Stern (Merab Ninidze), a seedy doctor who has been stuck in that hospital due to a serious case of malpractice and the following legal trouble. For getting out of his legal trouble, Stern needs lots of money, so he has often sold refugees medical referrals which can get them out of the camp, and his colleague and girlfriend Vera (Mónika Balsai) goes along with that scheme.

When Stern meets Aryan for the first time, Aryan just looks like another refugee to be taken care of, but then Aryan shows his power to Stern, and Stern immediately changes his mind as seeing an opportunity for more money. After managing to get Aryan out of the camp, he offers Aryan a partnership for their mutual benefits, and Aryan agrees to work with Stern as he really needs to reunite with his father and then get out of the country.

We soon see how they work together. They visit several different people one by one, and these people are quite surprised by what Aryan demonstrates in front of them. In case of some tough guy, Aryan not only levitates but also warps the reality around him and that guy a bit, and the resulting moment is another visual highlight in the film. 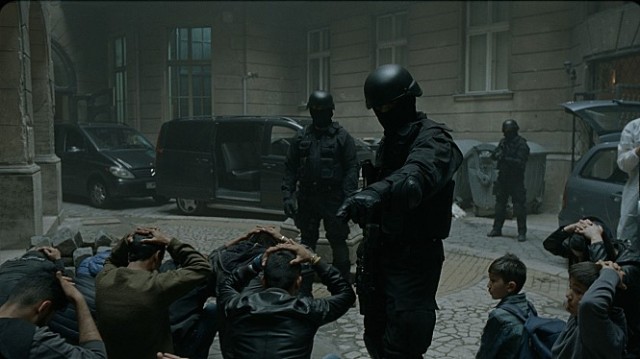 Meanwhile, László is tracking down Aryan for covering up his deed. It does not take much time for László to learn of Aryan’s power as well as Stern’s association with Aryan, and that makes him more determined to catch Aryan. After making a sudden plot turn, the movie tries to generate more suspense as László comes quite closer to Aryan and Stern, and we later get an intense vehicle sequence which is steadily and palpably presented via an unbroken shot.

However, despite all these technically impressive aspects, the movie did not engage me a lot mainly because I felt distant toward its story and characters. Although I enjoyed its realistic approach, the story itself does not have enough narrative momentum, and its characters are more or less than cardboard figures to be moved along the plot. I guess we are supposed to care about Stern and Aryan, but neither of these two main characters are particularly well-developed, and the same thing can be said about several substantial supporting characters around them.

Although I appreciate some of its strong points, “Jupiter’s Moon” is a major letdown compared to what was achieved in Mundruczó’s previous work “White God”, which was one of the most interesting films I saw during 2015. Besides several visually striking moments to remember, that movie was also propelled a lot by its powerful drama revolving around one abandoned dog who came to lead a sort of revolution against human beings, and its overall result was something as emotionally resonating as “Rise of the Planet of the Apes” (2011) and its two excellent sequels. While surely as ambitious as “White God”, “Jupiter’s Moon” lacks the emotional power of “White God” in my trivial opinion, and I think you will have a better time if you watch “White God” instead.

Sidenote: At the beginning, the movie states that Jupiter has 67 moons, but, at this point, the total number of Jupiter’s moons is 79.

This entry was posted in Movies and tagged Fantasy, Refugee. Bookmark the permalink.