Suburban life has been always a fertile ground for satire, and “Mom and Dad” is one of such morbid cases exemplifying that aspect. The movie wants to have a vicious nutty fun with its outrageously disturbing premise, and it blatantly wields its dark humor while occasionally jolting us with shocking moments of violence. Although its wild attempt is not wholly successful, it is sometimes hilarious at least, and I sort of admire how much its two lead performers are willing to go overboard for laughs along with it.

Nicholas Cage and Selma Blair play Brent and Kendall Ryan, your typical middle-class suburban couple who gradually turns out to be not as happy as they seem on the surface. When they begin another mundane day of their monotonous life with their two children in a cozy house located in some suburban area, everything looks fine and ordinary, but we soon see that they do not get along very well with their children. As your typical adolescent girl, their daughter Carly (Anne Winters) clashes with her father over her boyfriend Damon (Robert T. Cunningham), and Kendall does not know what to do with her daughter as feeling more of the gap between her and her daughter. In case of Josh (Zackary Arthur), he is less troublesome in comparison, but, as shown from one brief tense moment, he inadvertently annoys his parents at times.

Outside their house, Brent and Kendall continue to feel more of ennui and frustration accumulated inside them. It is clear that Brent hates his job, but he has no choice as the breadwinner of his family, and we later see how he usually spends his numbing working hour. Kendall has yearned to go back to her old job, but it has been almost 15 years since she quitted her old job, and it looks like she will be stuck in her suburban neighborhood for the rest of her life just like other housewives including her best friend.

And then, as announced to us in advance via the disturbing opening scene, a very weird thing begins to happen. Probably due to some electromagnetic wave generated from electronic devices, millions of parents are suddenly swept into mass derangement around the country, and they all come to be driven by an inexplicable urge to kill their own children. At one point, we see many school kids attacked by their own parents who come to their school in group, and then we get a disturbing scene where a bunch of guys intensely stare at their newborn babies from the distance at a local hospital.

Perplexed and scared by this terrible chaotic circumstance, both Brent and Kendall hurriedly drive back to their home for protecting their children, but, of course, they also come to feel that murderous urge in the end. As Carly and Josh desperately try to protect themselves from their homicidal parents, the movie attempts to be a little more serious amid its insane moments of sound and fury. Through a number of sudden flashback scenes, it tries to bring some emotional depth to what is going on between its mad couple and their children, and it also gives us a twisted moment of irony as observing how Brent and Selma become closer to each other than ever through their madness. As their old resentment and frustration are ventilated through their madness, Brent and Selma somehow feel better than before, and they even come to have a sweet talk while zealously waiting for any chance to kill their children.

The movie sometimes falters in its deranged dance between horror and comedy. For example, I instantly noticed that one particularly sequence during its second half basically copies a similar one in “Panic Room” (2002), and I was a bit disappointed with its predictable payoff moment. While I did laugh hard during several good moments including an uproariously loony climatic scene, they are handled in rather rote and predictable ways, and the final scene of the movie is not as comically impactful as intended.

Nevertheless, the movie works whenever Cage and Blair hurl themselves into their roles with considerable gusto. Although he has wasted his talent in numerous bad films during recent years, Cage is still a wonderful performer who is especially good at playing edgy and intense characters as shown from “Wild at Heart” (1990) and “Leaving Las Vegas” (1995), and it is certainly entertaining to watch him going berserk along with his character on the screen. While more restrained in comparison, Blair is also solid in her equally compelling performance, and I enjoyed her haywire comic chemistry with Cage.

In case of other main performers of the film, they are under-utilized due to their underdeveloped characters. Anne Winters, Zachary Arthur, and Robert T. Cunningham are adequate in their roles, but there are not many things they can do with their cardboard characters, so we come to observe their plight from the distance. While it is nice to see Lance Henriksen again, there is not much surprise from his supporting role, and that is another disappointment in the film.

“Mom and Dad” is written and directed by Brian Taylor, who previously directed “Crank” (2006) and “Gamer” (2009). Compared to the unpleasant boredom of “Gamer”, “Mom and Dad” is far more entertaining on the whole, but it feels like a one-joke stretched a little too long, and the overall result is a mixed bag which is not crazy or smart enough to engage and surprise me. I would rather recommend “Mayhem” (2017) because that movie did a better job of mixing laugh and violence, but, considering its morbid B-movie spirit, I will not be surprised if “Mom and Dad” becomes a cult favorite later. 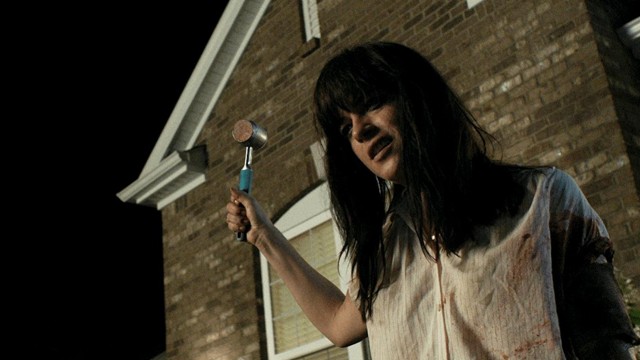 This entry was posted in Movies and tagged Comedy, Family, Horror. Bookmark the permalink.