While being your average zombie movie on the surface, Australian film “Cargo” deserves some praise for several reasons. Although we are often served with those flesh-craving zombies as expected, it is mostly driven by its hero’s desperate attempt to save his only child, and it is also firmly anchored by the strong performance from its reliable lead performer. Yes, I clearly saw where its story was heading right from the very beginning, but the movie is fairly engaging on the whole, and I was entertained to some degrees even while noticing its several glaring weak aspects.

During its first act, the movie gradually establishes its apocalyptic background as focusing on the ongoing situation of its hero and his two family members. Due a sudden virus epidemic, civilization was collapsed in Australia as many people were turned into zombies, and the opening scene shows Andy (Martin Freeman) and his wife Kay (Susie Porter) going through their another uncertain day on a small boat along with their baby daughter. They have been trying to go to a military base located far from where they are at present, but there is no guarantee on whether that place is safe or not, and they are also running out of their food supply.

And then they come across something which seems fortunate for them at first and then turns out to be more dangerous than expected. I will not go into details here, but I can tell you instead that Andy becomes helpless as watching his dear wife being turned into a zombie step by step. Although this ghastly progress of the disease usually takes around 48 hours, his wife’s condition quickly becomes worse and worse due to her severely injured condition, and there eventually comes a point where nothing can be done on her except mercy killing.

Now Andy becomes the only one to take care of their infant child, but, alas, he happens to be beaten by his zombie wife, and he must do anything for getting his child to any possible safe place before it is too late for his child. After activating his timer (how convenient it is!), he continues the journey with his child on his back, and the movie often accentuates his isolated desperation via the occasional wide shots showing the wide, stark landscapes of Australian outback. 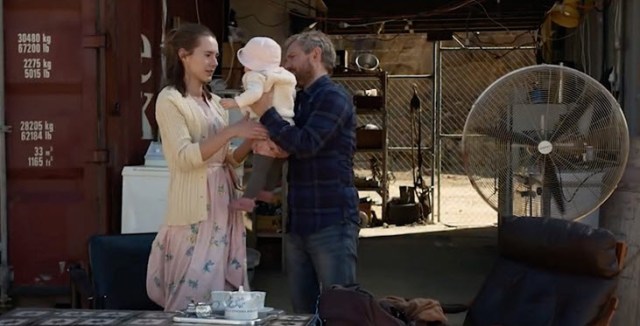 It is not much of a spoiler to tell you that Andy comes across a few characters one by one while going here and there around in this vast wasteland region. In case of a middle-aged school teacher who gives him a temporary spot to stay, she has a thoughtful night conversation with him later, and I like a small poignant moment which silently reveals to him and us why she is not suitable for taking care of his child. In case of a guy who has maintained his own shelter for a while, he is your typical survivalist who casually shows his vicious streaks to Andy, and we are not so surprised when a woman living with this guy asks for help from Andy later.

And there are also a group of Aborigine characters, who freely move around here and there in their territory as hunting and killing zombies. As mentioned at one point, many Aborigine people came back to their old way of life after the collapse of civilization, and the movie accordingly makes an indirect point on their painful historical past resulted from the advance of white civilization during the 19-20th century.

The movie pays considerable attention to a young Aborigine girl named Thoomie (newcomer Simone Landers), who happens to come across Andy early in the story and then comes across him again via sheer coincidence. She has been trying to take care of her zombie father, but, of course, that is not an easy task at all, and she hopes that her father will be cured by an old Aborigine guy nicknamed “Cleverman”. 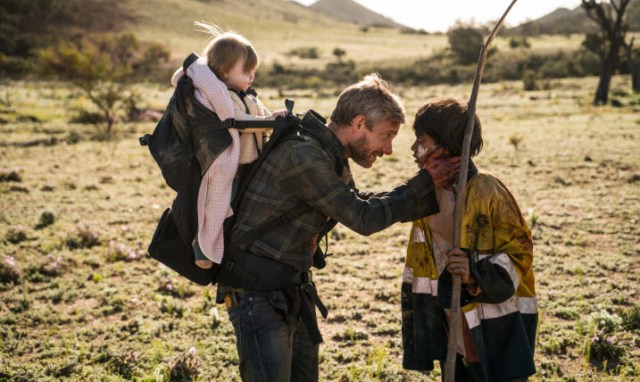 Although it is a little too heavy-handed in its storytelling, the movie mostly maintains well its level of tension, and Ben Howling and his co-director/writer Yolanda Ramke did a good job of setting a vivid, realistic mood for their story and characters. Based on their 2013 short film of the same name, the movie shows its seams from time to time, but its vivid local atmosphere compensates for that and other weak aspects including several contrived moments, and their cinematographer Geoffrey Simpson provides a number of bleakly beautiful landscape shots to remember.

Above all, the movie is steadily carried by the committed performance from Martin Freeman, who has been more prominent since his solid acting in BBC TV series “Sherlock” and Peter Jackson’s unnecessary Hobbit trilogy. While never overstating his character’s accumulating despair, he ably conveys to us his character’s dogged determination, and that is why the expected finale works on emotional level.

Freeman is also surrounded by a number of good supporting performers. While Susie Porter is effective in her scenes with Freeman, Anthony Hayes, Kris McQuade, and Simone Landers are also fine in their respective supporting roles, and it is surely nice to see David Gulpilil again, who was unforgettable in Nicholas Roeg’s great film “Walkabout” (1971).

Overall, “Cargo”, which is currently available on Netflix, is not exactly fresh, but it is equipped with strong elements including Freeman’s commendable performance. Although it does not break any new ground in its genre territory, it does its job as well as intended with some local flavor, and I had a good time thanks to that.