Based on an inspiring real-life story, “Stronger” wants to engage you and then touch you, and it did its job mostly well although it sometimes stumbles as much as its ordinary hero. While some parts in the movie feel artificial and heavy-handed in my inconsequential opinion, there are also good parts which made me emotionally involved in its earnest drama, and I came to appreciate its strong elements including its lead actor’s solid performance.

In the beginning, the movie shows us the mundane daily life of Jeff Bauman (Jake Gyllenhaal) in Boston. Although he recently broke up with his girlfriend Erin Hurley (Tatiana Maslany), this 27-year-old working-class lad hopes that she will resume their relationship someday, and he surely tries hard to win her heart again when he comes across her at a local bar. After learning that she will participate in the upcoming marathon competition in the city, he becomes determined to show his love again to her, and that is how he happens to be around the finishing line during that fateful afternoon of April 15th, 2013. Shortly before she and other participants arrive at the finishing line, two bombs are suddenly exploded around the finishing line, and, though he luckily survives, he finds his two legs amputated when he regains his consciousness at a local hospital a few days later.

While he remains to be disoriented and devastated by what happened to him, Bauman finds himself suddenly becoming a national hero as what he happened to witness right before the bombing leads to the arrest of one of the two Kyrgyz-American brothers responsible for the bombing (As many of you remember, the other one was killed during a shootout with the police). Everyone around him is excited to see him on the spotlight, but he feels quite awkward with that overwhelming attention toward him, and he also finds himself struggling a lot with his changed physical state, which demands lots of effort and patience from him as shown from several scenes including the ones involved with his prosthetic legs.

Furthermore, he suffers post-traumatic stress disorder (PTSD) as often haunted by his painful memory of the bombing incident. When he is about to present himself in front of lots of people at a major hokey game, he suddenly finds himself overwhelmed by what he still vividly remembers from the bombing incident, and it is fortunate for him that he is accompanied with Erin, who stands by him as he manages to present himself well before the game begins.

After coming to see that her ex-boyfriend really needs help, Erin comes to live in his residence where he has lived with his divorced mother Patty (Miranda Richardson), but she soon finds herself running out of patience as he continues his downward spiral coupled with heavy drinking. While not showing much will and effort in his rehabilitation process, he frequently drinks a lot with his friends, and there is a morbidly amusing moment when he tries to drive a car with some assistance from one of his drinking buddies.

The screenplay by John Pollono, which is adapted from the book of the same name by Bauman and his co-writer Bret Witter, does not hesitate in its ‘warts-and-all’ approach. When Erin finally decides that enough is enough, we get a very hurtful moment unfolded between her and Bauman, and that will remind you that relationship sometimes demands a lot more than love (Although it is not mentioned in the movie, Erin and Bauman in real life eventually divorced in 2017 after a short period of marriage). The movie also pays considerable attention to that slow, excruciating rehabilitation process Bauman must endure, and it did a good job of palpably conveying the sheer hardships of that process to us.

As the center of the film, Jake Gyllenhaal, who has recently shown notably committed performances in “Nightcrawler” (2014) and “Southpaw” (2015), gives another compelling performance to watch. Besides looking physically convincing on the screen, he is also believable as a likable ordinary guy suddenly facing many difficult obstacles to overcome, and he is especially fine when his character gradually comes to find a way to climb up from the bottom of despair and moroseness after his meeting with a decent man who helped him a lot shortly after the bombing.

On the opposite, Tatiana Maslany, a wonderful Canadian actress who has been more prominent thanks to her Emmy-winning performance in TV series “Orphan Black”, also gives a fine performance, and she and Gyllenhaal click well with each other during their intimate scenes. In case of other notable performers in the film including Miranda Richardson and Clancy Brown, they are rather under-utilized in their broad supporting roles, and that weak aspect is more glaring compared to the unadorned acting of several non-professional performers playing themselves in the film.

Despite its weak points, “Stronger” earns its moving final scene thanks to its strong points including Gyllenhaal’s commendable performance and the competent direction of director David Gordon Green, who has frequently gone up and down as making various films ranging from “Pineapple Express” (2008) to “Joe” (2013) since he debuted with “George Washington” (2000). I don’t think “Stronger” is one of his better works, but he did as much as he could with what was given to him, and the result is familiar but engaging enough for recommendation. Sure, it may be another ‘disability of the week’ movie, but it is a well-made one at least. 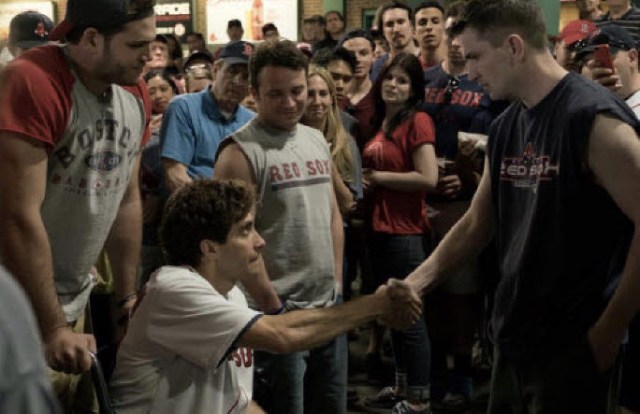