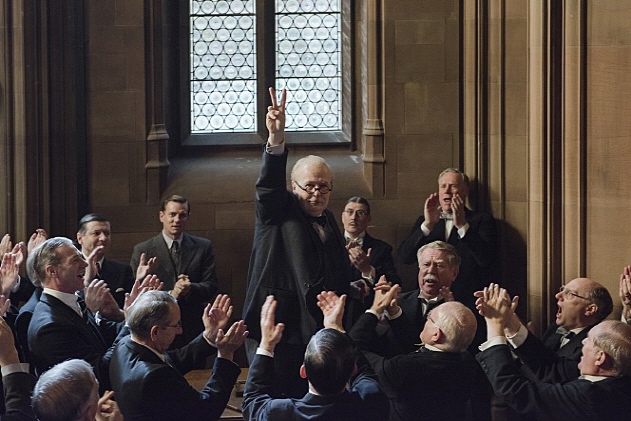 For Winston Churchill, 1940 was one of the most dramatic years in his illustrious life and career. While everything seemed to be over for Britain as Nazi Germany swiftly advanced over the Europe continent during that turbulent and perilous time, he showed extraordinary leadership as the Prime Minister of Britain, and his defiant position against Nazi Germany eventually led to the victory of the Allies at the end of World War II.

Although it may not show anything particularly new about Churchill’s life and career, “Darkest Hour” works as a vivid, compelling look into his risky political struggle during that period. The movie did a skillful job of taking us right into its period background, and it is a solid historical drama which can be watched along with Christopher Nolan’s “Dunkirk” (2017), which is another notable World War II movie of this year and overlaps with “Darkest Hour” to some degrees.

The movie opens with the urgent situation in Europe during early May of 1940. Not long after invading Poland and Norway, Nazi Germany goes forward to the Netherlands, Belgium, and France, and the British government is certainly shocked and shaken by this rapid progress of the war. As pressured by the opposition party, Prime Minister Neville Chamberlain (Ronald Pickup) has no choice but to resign, so his governing party must choose somebody else as new Prime Minister, but then they soon come to see that they have only one guy for that.

That guy in question is none other than Winston Churchill (Gary Oldman), and he is ready for doing his duty, but many people including King George VI (Ben Mendelsohn) are not so pleased about this. While he was quite correct about Hitler and Nazi Germany from the start, Churchill has been stuck with a very bad reputation due to not only many political missteps in the past but also his volatile personality, and his irascible side is exemplified well by when he becomes too harsh to his new secretary Elizabeth Layton (Lily James) on her first day.

After officially replacing Chamberlain, Churchill quickly assembles the War Cabinet, but he soon finds himself in the conflict with his two cabinet members: Chamberlain and Lord Halifax (Stephen Dillane). They believe that the British government must negotiate with Nazi Germany as soon as possible, but Churchill does not approve of that because their enemy is not negotiable at all in his view. As reflected by one of his famous speeches at the parliament (“I have nothing to offer but blood, toil, tears, and sweat”), he is determined to stand against Hitler and Nazi Germany as much as he can.

However, things get worse day by day. As the Nazi Germany Army keeps advancing into France, the British Expeditionary Force in France is eventually cornered in the beach area of a small French city named Dunkirk. Churchill orders a massive evacuation operation for thousands of British soldiers trapped in Dunkirk, but there is a big risk for that, and the situation becomes more desperate when US President Franklin D. Roosevelt tells him that the US government cannot help due to the Neutrality Acts of 1930s, which prevented US from being directly involved in the war until the attack on Pearl Harbor in 1941.

As the movie closely observes how Churchill struggles inside and outside during this very desperate time, Gary Oldman’s stellar performance, which will definitely get an Oscar nomination in next week, ably conveys the thoughts and feelings churning behind his character’s feisty façade. Almost unrecognizable due to his heavy makeup, Oldman brings considerable humanity and personality to his larger-than-life character, and the resulting performance is another interesting dramatic portrayal of Churchill, who is recently played by John Lithgow in the acclaimed TV series “The Crown”. While he is as intense and ferocious as demanded in many big moments in the film, Oldman also deftly handles a number of small intimate scenes, and he is particularly wonderful when his character happens to have an unexpected guest at one point later in the film. 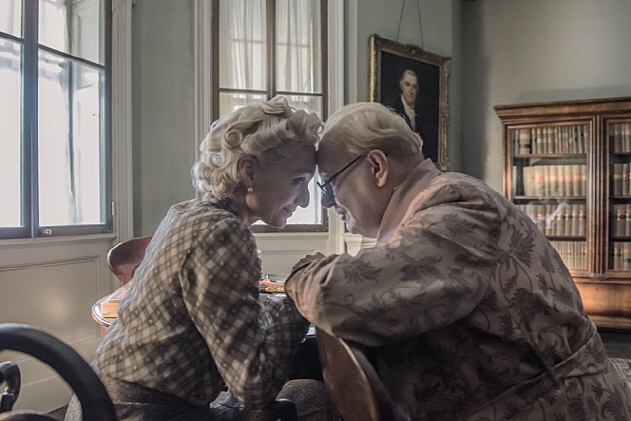 The supporting performers revolving around Oldman do their respective jobs as much as required. As Churchill’s no-nonsense wife, Kristin Scott Thomas has a couple of juicy scenes, and she and Oldman click together well on the screen as two people who have known and understood well each other. Lily James is relatively bland in her functional role, but she holds her own place well in front of Oldman at least. While Stephen Dillane and Ronald Pickup are effective as Churchill’s main opponents, Ben Mendelsohn, who has been more notable since his breakout turn in “Animal Kingdom” (2010), is commendable as King George VI, and his good performance deserves to be compared to Colin Firth’s performance in “The King’s Speech” (2010).

On the technical levels, “Darkest Hour” is impressive on the whole thanks to the competent direction of director Joe Wright, who is no stranger to period drama as previously shown from “Pride and Prejudice” (2005) and “Atonement” (2007). While providing several good visual moments through fluid camerawork, his cinematographer Bruno Delbonnel establishes well authentic period atmosphere on the screen, and we come to sense the gloom constantly hovering over Churchill and his country and people. While mostly sticking to its restrained mode, Dario Marianelli’s score dials up the level of dramatic tension whenever it is necessary, and this is certainly his another fruitful collaboration with Wright.

The movie is not without flaws. The screenplay by Anthony McCarten is often trite and blatant, and I do not think a scene where Churchill encounters a group of civilians by himself alone works as well as intended, but the movie is still an engaging experience thanks to its many strong elements including Oldman’s captivating acting. Yes, it is indeed your typical Oscar-season performance, but he did a heck of job, and that is surely something worthwhile to watch.