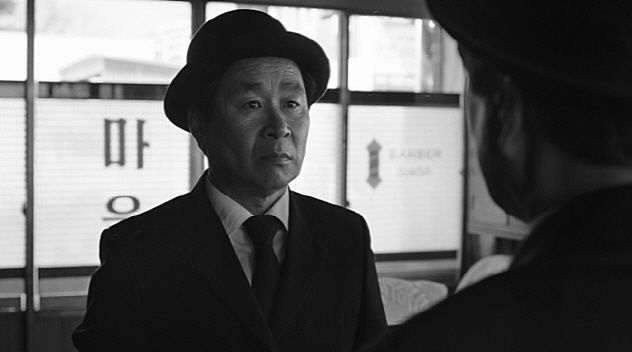 South Korean film “Merry Christmas Mr. Mo” is advertised as a ‘black comedy stranger than paradise’, and that description is correct to some degrees. While I was a bit disappointed to find that it is not as uproarious or edgy as I thought, the movie works as a deadpan comedy film reminiscent of Jim Jarmusch’s works including, yes, “Stranger Than Paradise” (1984), and I had a fun with its small good moments which become more emotionally resonant around its expected arrival point.

In the beginning, the movie dryly observes the mundane daily routine of Mo Guem-san (Ki Joo-bong), a middle-aged barber who has lived in some rural town for many years. While he walks to his barbershop in the morning, he encounters an adolescent boy who apparently knows him, and their following interaction effectively sets the overall tone of the film. Mo does not respond much when the boy says hello to him as passing by him, but then the boy says hello to him again as coming back to him, and he is only baffled a bit to our small amusement.

He spends many hours alone at his barbershop except when his few customers come, and that reminded me of a barbershop to which I went from time to time during 2015. Like his barbershop, that one was in a quiet rural town where I worked during that period, and its middle-aged owner, who was not so different from Mo, did not have many customers either. The movie did a good job of presenting several realistic details on the screen, and I must tell you that some of them instantly took me back to that barbershop I still remember well.

Once his working hour is over, Mo spends some time at a local swimming pool, and then he goes to an old-fashioned bar, which mostly feels quiet and empty just like his barbershop as classical music is played on the background. After that, he returns to his apartment where he has lived alone since his dear wife died, and we get some small laughs as watching him struggling to sleep on his bed. 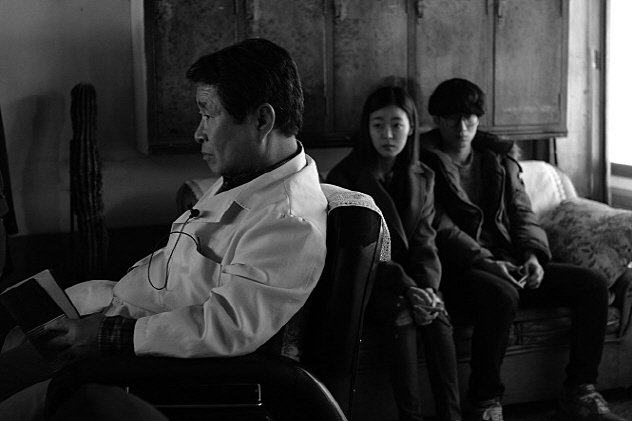 And then there comes a bad news for him. He turns out to have a serious case of stomach cancer, and he is told by his doctor that he must go to a bigger hospital as soon as possible. As trying to process this bad news, Mo comes to reflect on his life on the whole, and then something comes upon his mind after watching his family’s old home video. For his estranged son who has aspired to be a filmmaker, he concocts the idea for a short film to be shot by his son, and we soon see him tirelessly working on the screenplay to be shown to his son.

However, his son, named Stephen (Oh Jung-hwan), is not exactly in an ideal status for that at present. Although he still dreams of being a filmmaker someday, he has been going nowhere for years, and the same thing can be said about his relationship with his girlfriend Ye-won (Go Won-hee), who has been clearly running out of her patience as shown from one brief scene between them. While he is goofing off in their tiny residence, she is diligently doing her work, and she flatly reminds him that he should be more serious about his life – and their relationship, of course.

When his father calls him, Stephen comes to see his father along with his girlfriend, and he is flabbergasted when Mo shows him his screenplay. After revealing to Stephen that he once wanted to be a film actor, Mo asks his son to help him making a short film, which will be shown to invited audiences on Christmas if everything works out all right as he wishes. Stephen is understandably reluctant, but he comes to agree to help his father, and so does Ye-won, who unexpectedly turns out to be more supportive than her boyfriend.

As these three main characters move here and there around a number of locations, the movie generates nice moments of low-key humor from their guerrilla filmmaking. You may chuckle a bit as Mo prepares his costume and ‘props’ for the shooting, and then there comes a very funny moment as they attempt to shoot a rather creative explosion scene, which I will not describe in detail here for not spoiling your fun.

Of course, the movie becomes more serious after a certain narrative point, but director/writer Lim Dae-yeong deftly balances itself between humor and drama, and his story continues to saunter along with its main characters while never losing its sense of humor. Beautifully shot in digital black and white film by cinematographer Moon Myung-hwan, the movie provides a number of wonderful visual moments as looking around its seemingly mundane locations, and the score by Ha Heon-jin effectively enhances the dry atmosphere surrounding the characters in the film.

As the comic/dramatic center of the movie, Ki Joo-bong is commendable in his understated lead performance; he surely knows he should keep his acting straight as much as possible, and the result is alternatively funny and poignant while also being one of the best South Korean movie performances of this year. While Oh Jung-hwan and Go Won-hee support Ki well, the other supporting performers in the film are also effective in their respective roles, and Kim Jeong-young is particularly good as a woman in Mo’s old past.

Although I initially felt impatient at times during my viewing, I eventually came to enjoy “Merry Christmas, Mr. Mo”, and I admire its strong points including distinctive mood and solid performance. Sure, it may be a little too dry and slow for you at first, but it is a charming and touching human tale about life and love nonetheless, and its finale will surely make you smile in the end. 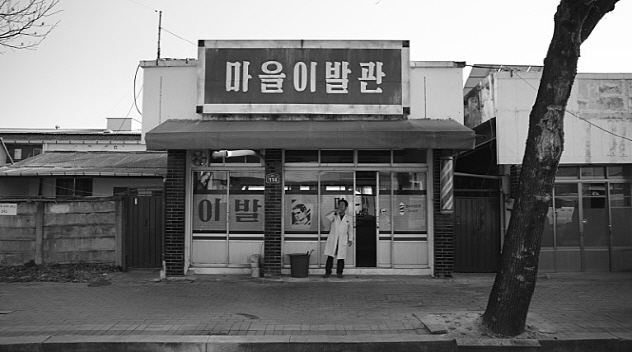 This entry was posted in Movies and tagged Barber, Father and son, Filmmaking, Illness, South Korean Film. Bookmark the permalink.