Among the superhero characters of Marvel Cinematic Universe (MCU), Thor is the least interesting one for good reasons. Merely a mighty alien god mainly defined by his brawny appearance and that big hammer, he does not have anything else to draw my interest, and it is no wonder that “Thor” (2011) and “Thor: The Dark World” (2013) are the most mediocre ones in the increasing bunch of MCU movies. Saddled with thin characterization and weak plot, both of them bored me to a considerable degree, and, to be frank with you, I did not feel any particular need to improve my vague memories of them before watching “Thor: Ragnarok”.

Nevertheless, I had some expectation on “Thor: Ragnarok” after watching its trailer several months ago, and I am happy to report that the movie is better than its two previous films. Although it often tries a little too hard, the movie is still amusing and entertaining on the whole, and I must admit that I laughed or chuckled several times while also appreciating how it distinguishes itself through a little bit of style and quirkiness.

As many of you know, Thor (Chris Hemsworth) decided to spend more time outside his home planet Asgard after what happened in “Thor: The Dark World”, and the movie begins at the time point not long after the finale of “Avengers: Age of Ultron” (2015). Right after his showdown with a giant fiery entity who is one of the old enemies of his father Odin (Anthony Hopkins), Thor returns to Asgard, and he soon faces his brother Loki (Tom Hiddleston, who is as shifty as before), who has ruled the planet after faking his death and then disguising himself as Odin. While phoning in his role as before, Hopkins is a little more fun compared to his completely wasteful appearance in “Transformers: The Last Knight” (2017), and we also get a small humorous moment featuring the unexpected cameo appearance of three certain performers.

After exposing Loki in front of everyone, Thor goes to the Earth along with Loki for finding their father, whom they soon meet thanks to the considerable help from Doctor Strange (Benedict Cumberbatch). As previously shown from “Doctor Strange”, Cumberbatch is well-cast in his role, and he surely has a wry fun with his character during his sole scene in the film.

Shortly after meeting his two sons, Odin warns them of a big impending danger coming to Asgard. For many years, Odin has suppressed the presence of someone who was once his right hand during their bloody period of wars and conquests, but now he cannot do that anymore, and that figure, named Hela (Cate Blanchett), soon appears right in front of Thor and Loki. As the villain of the story, Blanchet fills her role with considerable authority and charisma, and she certainly enjoys herself as making grand sullen gestures on the screen.

After his hammer is smashed by Hela during his fight with her, Thor happens to be tumbled down to a planet named Sakaar, which looks like the galactic version of trash burial site. He is immediately captured by a woman named Valkyrie (Tessa Thompson) and then becomes one of the fighters owned by Grandmaster (Jeff Goldblum), the megalomaniac ruler of the planet who occasionally holds a big fighting match for his people. Surrounded by the outlandish production design and costumes reminiscent of “Flash Gordon” (1980), Goldblum comfortably embodies his offbeat villain character, and Thompson, who has been more notable since her breakout role in “Dear White People” (2014), is suitably plucky in her role.

Anyway, Thor comes to confront Grandmaster’s undefeated champion in a huge arena, and that champion in question is none other than Hulk (Mark Ruffalo), who has somehow been stuck in Sakaar since the finale of “Avengers: Age of Ultron”. Their encounter in the arena is not so pleasant to say the least, but, after lots of bangs and crashes, our two superheroes manage to get along well with each other, and Hulk is later transformed back to Bruce Banner, who is understandably nervous and agitated as suddenly finding himself on an alien planet. While he has shown more interesting performances during his recent years, Ruffalo is engaging as usual, and he gets some funny moments as his character tries to help Thor while also trying to get his violent alter ego under control. 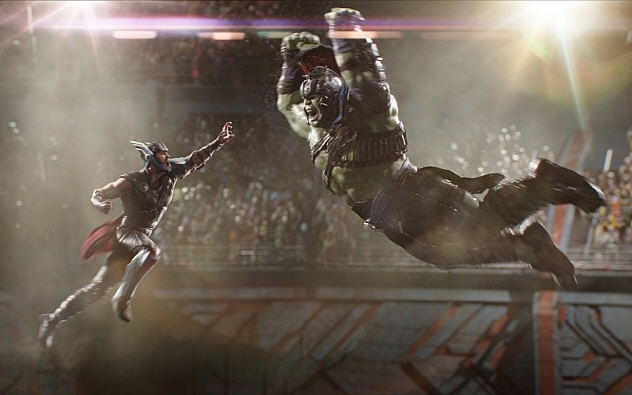 Of course, the movie eventually arrives at a big climatic CGI finale as required, and that was the point where I found myself becoming less interested than before. Although I enjoyed Blanchett’s performance, many of her scenes in the movie are more or less than perfunctory interludes to remind us of what is being at stake, and I was not so impressed by her character’s stock CGI soldiers or a big bad wolf which somehow reminded me of the Twilight Saga movies.

At least, director Taika Waititi, who previous directed “What We Do in the Shadows” (2014) and “Hunt for the Wilderpeople” (2016), did a good job of balancing his movie between humor and drama. Although the screenplay by Eric Pearson, Craig Kyle, and Christopher Yost frequently feels overcrowded and overstuffed while occasionally doing too much in its attempts in comedy, Waititi deftly handles many of farcical moments in the film, and Hemsworth delightfully wields his comic side which was previously utilized well in “Ghostbusters” (2016).

Overall, “Thor: Ragnarok” is a solid MCU product more enjoyable than its predecessors. I noticed its several shortcomings, and I also observed that it mostly plays safe with story and characters like many other MCU movies, but it has some distinctive style and personality to compensate for that. I still do not have lots of expectation on what will come next, but I guess I and other audiences will continue to get as much as we pay.

This entry was posted in Movies and tagged Fantasy, Superhero. Bookmark the permalink.