If you despise what Donald Trump and his party represent, I bet you will dislike and detest Roger Stone as much as me after watching Netflix documentary “Get Me Roger Stone”. Here is a smart, diabolical political operator who has always been willing to try any dirty tactic for his party’s political victory, and it is chilling and disturbing to observe how much he has contributed to the recent rise of Donald Trump as well as the bastardization of American politics during last several decades.

While closely watching Stone working for Trump’s presidential election campaign during 2016, the documentary gives us Stone’s political background via a number of interviewees including Stone himself, who is quite frank about himself in front of the camera. For instance, he gleefully recollects how he manipulated a mock presidential election at his school via spreading a fake rumor, and it is quite clear to us that he was born to be a political operator.

He initially aspired to be an actor, but there came a turning point during the 1964 US Presidential election. After quite impressed by Republican nominee Barry Goldwater and his hardcore conservative philosophy, young Stone came to set his eyes on politics, and he eventually came to work for Richard Nixon’s presidential election campaign in 1972. When Watergate Scandal finally broke out, he drew considerable attention as being the youngest person called before the following congress hearing, and he tells us how much he enjoyed that moment although his parents were ashamed of their son’s involvement in the scandal. 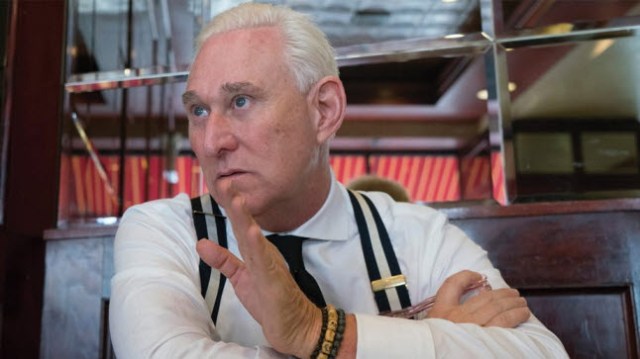 That could have been the end of his political career, but Stone managed to keep moving on instead as continuing to work for Nixon, and he soon came upon his first big break through Ronald Reagan. He saw the considerable potentials from millions of blue collar democratic voters who could be persuaded enough to vote for Reagan, and his strategy on several key Democratic states worked marvelously as he predicted. After Reagan’s victory in 1980, Stone rose higher within his party, and that was how he came to meet Roy Cohn, a notorious right-wing lawyer who was one of the most influential figures in Republican party.

Through Cohn, Stone met one of Cohn’s close associates, and that guy was none other than Donald Trump, who was taking his first steps into the realm of celebrity during that period. As Trump became interested in entering politics, Stone was there to help and advise him, and you may notice how much Trump resembles Stone in terms of attitude and speech pattern. Both of them are so blunt and flamboyant that you cannot help but watch them, and Stone’s garrulous speech pattern certainly evokes Trump’s many verbal razzle-dazzles in front of the media and his supporters.

As the Reagan Presidency continued, Stone further accumulated his infamy through a lobbying firm he founded along with his several friends/associates including Paul Manafort, who, as many of you remember, was once the manager of Trump’s presidential election campaign during 2016. Besides having numerous politicians in Washington D.C. under its control, Stone’s lobbying firm was notorious for having many notable dictators and despots around the world as their clients, and it is darkly amusing to see Stone and Manafort talking casually about what they did during that time. They seem to feel no qualms about that at all, and Manafort’s phlegmatic attitude in front of the camera feels rather ironic considering his current legal problem.

The 1990s was quite disappointing for Stone as Republican Party lost twice to Democratic Party in the US presidential election. When he became a national joke due to his sex scandal in 1996, it looked like the end of his political career was near, but then he came back with a vengeance in 2000. Through his usual dirty tactics applied to several key districts of Florida, he made it sure that George W. Bush won the 2000 US Presidential election, and he also played a crucial part in Bush’s re-election in 2004.

While he still remained on the fringe of his party, Stone became more prominent nonetheless, and he surely enjoyed his eventual rising status as Trump announced that he would run for the presidential nominee of Republican Party in 2015. During the primary election of Republican Party, Trump went for every dirty tactic available to him as he learned from Cohn and Stone, and Republican Party was helplessly overtaken by Trump mainly because, as already shown from the 2012 US Presidential election, there was not any substantial political force left inside the party.

Once Trump began to clash with Hillary Clinton during late 2016, things became quite uglier, and directors Dylan Bank, Daniel DiMauro, and Morgan Pehme provide lots of cringe-inducing moments which are also infuriating to watch at times. Even after he officially left the Trump’s presidential election campaign, Stone did everything he could for supporting Trump and tarnishing Clinton’s public reputation, and we are horrified and disgusted as watching how those ‘alternative facts’ spewed out from Trump and Stone were willingly accepted by Trump’s zealous supporters. When Trump got elected in November 2016, Stone delightfully celebrated that along with Alex Jones, and the documentary painfully reminds us of how despairing that day was for many Americans.

As sharply pointed out by many critical interviewees in the film including journalist Wayne Barrett, who died shortly before the film was released on Netflix, Roger Stone has done lots of serious damages to American politics, and he does not hesitate at all to take the credit for that. He is indubitably proud of the ultimate culmination of his dirty political tactics, and he will definitely have no problem with how he is presented in “Get Me Roger Stone” because, in his opinion, it is better to be infamous than to be never famous at all. He is a monstrous guy indeed, but, boy, he does enjoy being bad and notorious, and we come to look at him with horrible fascination, while worrying about the possible social/political ramification of what he has deliberately created. 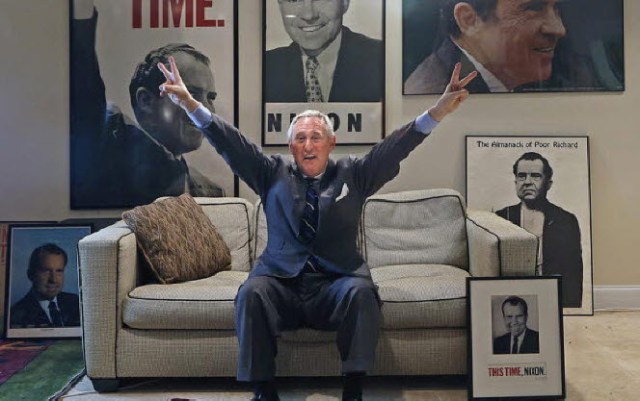 This entry was posted in Movies and tagged Documentary, Politics. Bookmark the permalink.