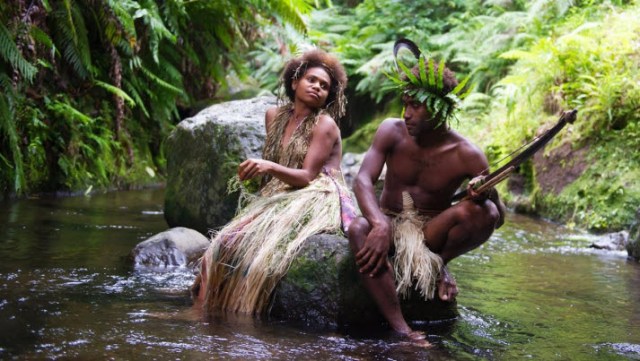 At first, “Tanna”, one of the Best Foreign Language Film Oscar nominees of this year, strikes us with its exotic tropical world and the tribal communities inside that beautiful world. Shot entirely in the island of Tanna, Vanuatu, the movie gives us a vivid, intimate look into an old way of life which has been maintained for many centuries in the island, and it becomes more engaging as it unfolds a familiar but appealing story of two star-crossed lovers.

They are Dain (Mungau Dain) and Wawa (Marie Wawa), and it initially seems nothing can prevent the growing affection between them. They grow up together in the same tribe residing in one jungle area of the island, and we observe how they and their families and other members of the tribe go through their peaceful daily life together. It is implied that the time is around the late 20th century (As mentioned at the end of the movie, the movie is inspired by a real-life story which happened in 1987), but they stick to their traditional lifestyle as their ancestors did, and that means Dain’s grandfather, who is the chief of the tribe and has also taken care of Dain since the death of his parents, will decide whom Wawa will marry.

We get to know a bit about Wawa’s family. Her little sister Seline (Marceline Rofit) is a plucky girl with tendency toward mischief, and we get a funny moment when she attempts a silly prank on some boy and then literally goes too far to the dismay of her father. Her father decides that Seline really needs to grow up more, so he asks his father, who is the shaman of the tribe, to take his daughter to Mountain Yasur, an active volcano which is a holy place for many natives in the island.

When Seline goes to Mountain Yasur along with her grandfather, the movie dazzles us with a number of magnificent views of this volcano. The volcano towering over the characters in its gray barren landscape makes a striking contrast with the green ambience of the jungle area, and we cannot help but be awed like Seline while watching the volcano constantly spewing out flecks of lava from the red, fiery bottom of the crater. As Seline’s grandfather quietly imparts his spiritual belief to his granddaughter, it certainly feels like being closer to nature and, probably, God.

But then a bad thing happens. Two people from a neighboring tribe sneak upon them, and they attack Seline’s grandfather just because they believe he is responsible for a bad luck in their tribe. Fortunately, Seline’s grandfather survives despite his serious injury, but his tribe people are understandably agitated by this incident because this is not the first conflict with that neighboring tribe. In fact, that tribe was responsible for the death of Dain’s parents, and Dain surely wants retaliation like many other people in his tribe.

As a wise old man, Dain’s grandfather does not want any more violence, so he chooses a more civilized way to resolve the situation. He holds a joint meeting with not only that neighboring tribe but also other tribes in the island, and it is decided during this meeting that Wawa should be given as a bride as a part of the peace negotiation.

Naturally, Dain and Wawa are not so pleased about this. In their view, they must follow what their hearts desire, and the movie emphasizes with them as watching them more attached to each other despite their impossible circumstance, but the movie also understands the position of other characters around Dain and Wawa. They certainly know well how much Dain and Wawa love each other, but Dain and Wawa’s happiness can cause another conflict, and that is the last thing they want. 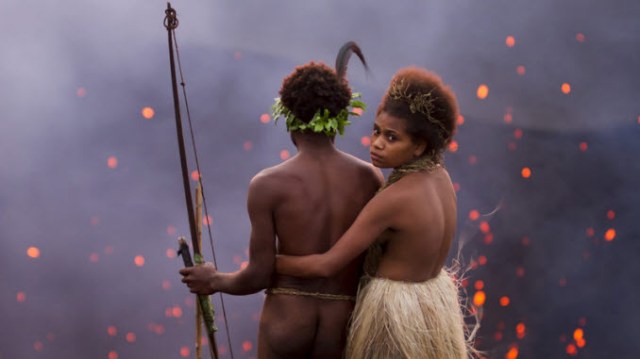 The situation becomes more tense when Dain and Wawa eventually run away together and then are pursued by not only their own people but also several members of that neighboring tribe. The movie maintains its relaxed narrative pace even at that point, and we see the other interesting parts of the island as Dain and Wawa wander around the island for finding any safe shelter for them. At one point, they come into a Christian community which relatively looks modernized compared to their tribe, and that leads to one of the most amusing moments in the film.

The co-directors Martin Butler and Bentley Dean, who won the International Critics’ Week Award at the 2015 Venice International Film Festival (Dean also received the Feodora award for his terrific cinematography), did a competent job of establishing the authentic sense of places and people via their documentary-like approach, and they also draw good natural performances from their non-professional cast members. I heard that the performers in the film simply played the fictional version of themselves in front of the camera, but they feel real and convincing on the screen, and their earnest acting fits well to the simple narrative of the movie.

Overall, “Tanna” is a small arthouse film which distinguishes itself with distinctive local personality mixed with palpable realism. They are a lot different from us in many ways, but we come to see their universal human matters as getting to know about their specific world, and we are touched by their modest but poignant drama. In my inconsequential opinion, that is what a good movie can do for us.

This entry was posted in Movies and tagged Family, Romance. Bookmark the permalink.