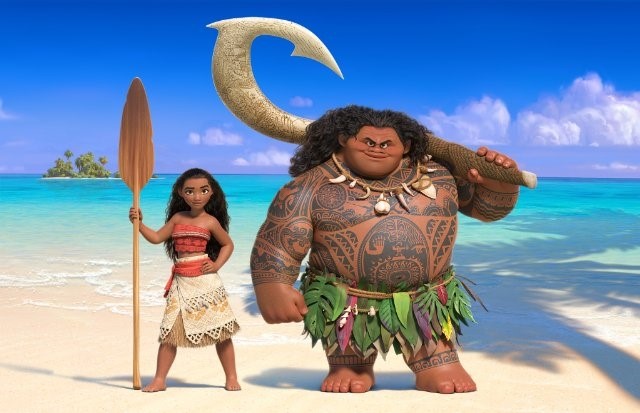 “Moana” is a model Disney animation feature film which dutifully follows its familiar storytelling formula with a number of nice changes and variations. Again, we have a spirited young heroine who comes to find her inner strength through one adventurous journey, but her conventional story is presented with lots of distinctive style and personality, and the film steadily entertains us from the beginning to the end.

Set in Ancient Polynesia, the film begins its story with the opening sequence presenting a legend about the goddess Te Fiti and the demigod Maui (voiced by Dwayne Johnson). When Maui stole Te Fiti’s small but precious stone heart which is the origin of her enormous power, the world created by her instantly lost its balance, and then there came the lava demon Te Kā. As a result, Maui lost not only the heart of Te Fiti but also his magical hook, which is the source of his shapeshifting power.

For the people of Island Motunui, the legend of Te Fiti and Maui has been no more than a folk tale to entertain kids. They have been fine and happy in their small but beautiful island which has provided enough food and place for them, and Chief Tui (voiced by Temuera Morrison) firmly believes that they will be all right as long as they stay in the island as following the tradition which has been maintained by them and their ancestors for many years.

However, his 16-year-old daughter Moana (voiced by Auli’i Cravalho) has a different thought. Even when she was very young, her heart was drawn to the ocean even though sailing beyond the reef surrounding the island is strictly forbidden, and that aspect of hers has remained same as before even after she comes to accept her responsibility as her father’s future successor. 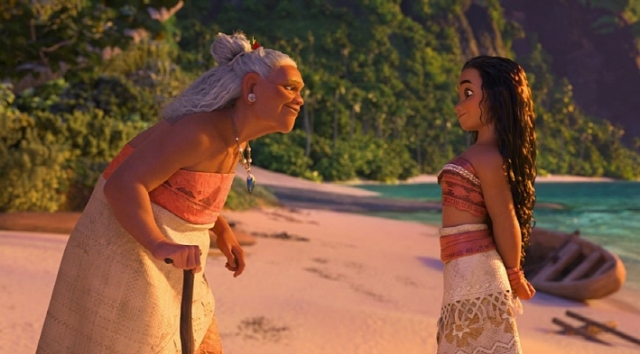 And then strange things start to happen in the island. Crops become withered for no apparent reason, and villagers are also confounded by the sudden decrease of fish around the island. Moana’s grandmother Tala (voiced by Rachel House), who has shared her passion toward the ocean with Moana, knows what is happening; the darkness resulted from Maui’s thievery a long time ago is now spreading toward the island, and the heart of Te Fiti must be put back into where it belongs before it is too late for the island and its people.

Through her grandmother, Moana discovers the hidden past of her ancestors during a grand sequence unfolded at a place hidden in the island, and she also comes to realize that, as already shown from an earlier scene, she was chosen as the one who will do that challenging task in question. With the heart of Te Fiti given to her by her grandmother and the guidance of the spirit of the ocean which took me back to “The Abyss” (1989), she sails away from the island for finding Maui and Maui’s magical hook, which is absolutely necessary for the success of her quest.

After experiencing a rough moment with the unforgiving side of the ocean, Moana fortunately arrives in an island where Maui has been stuck for many centuries. Maui, a big dude covered with lots of tattoos individually representing his many heroic exploits in the past, is not exactly cooperative right from his first encounter with Moana, but he is eventually persuaded to help her mainly because he needs to retrieve his magical hook.

As they sail along together across the ocean, the film provides several exhilarating sequences packed with wonder, amusement, and excitement. While I suspect that a certain bunch of creatures appearing during one sequence are a rip-off version of Minions, they are utilized well for action and comedy, and I was more amused and excited than expected as watching that sequence. I also appreciated the colorful details shown from the Realm of Monsters, and there is a funny scene involved with a big, greedy monster voiced by Jemaine Clement, who has a hilarious showstopper musical moment during that scene. 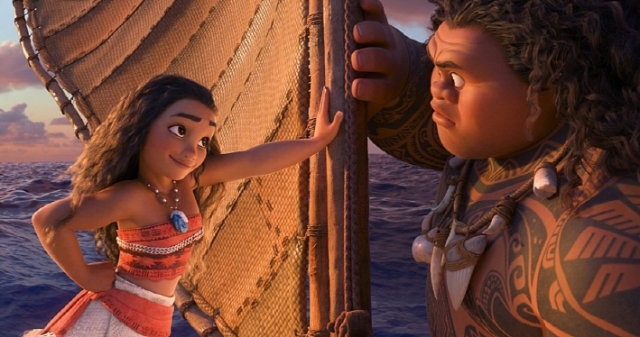 It helps that the story is anchored by the strong personality of its two contrasting lead characters. Like the two princess characters of “Frozen” (2013), Moana is a brave, independent girl who does not need any Prince Charming, and newcomer performer Auli’i Cravalho imbues pluck and charm into her character while showing her considerable singing talent during several musical scenes in the film. Although he can be quite vain and buffoonish, Maui comes to us as a jolly, likable guy, and Dwayne Johnson proves again his undeniable comic talent through a role perfectly fitting to his bulky screen persona. He clearly relishes his role during numerous comic scenes including the one which fully demonstrates his singing ability, and I certainly enjoyed how a moving tattoo figure on Maui’s skin functions as a sidekick character like Moana’s pet chicken Heihei (voiced by Alan Tudyk), whose silly odd behaviors always drew laughs from the audiences around me.

“Moana” is directed by John Musker and Ron Clement, who made a number of notable Disney animation films including “The Little Mermaid” (1989), “Aladdin” (1992), “Hercules” (1997), “Treasure Planet” (2002), and “The Prince and the Frog” (2009). Like these animations films, “Moana” is fun to watch thanks to its exuberant mood and lively energy, and I was entertained by its animation style and soundtrack aptly influenced by traditional South Pacific culture. Sure, it breaks no new ground, but it shows that there is still much fun and excitement to have in its familiar ground.

Sidenote: Short animation film “Inner Working” is shown before the screening of the film. It does not feel that fresh considering “Inside Out” (2015), but it is fun to watch anyway. 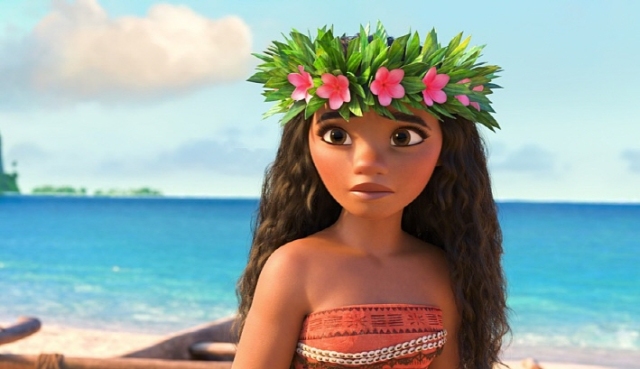 This entry was posted in Movies and tagged Adventure, Animation. Bookmark the permalink.