What a bizarre movie “Swiss Army Man” is. Its premise is so offbeat that you may have no particular desire to see the movie once you hear about its premise, and it is rather amazing that its two directors and their two lead performers somehow succeed in making something inherently morbid but strangely engaging. Although I had no idea on how to deal with this odd comedy film at first, I came to appreciate how deftly its directors balance their movie well between humor and pathos at least during its first two acts, and I certainly came to enjoy how willingly its two lead performers throw themselves into their challenging roles.

When we meet Hank (Paul Dano) during the opening scene, this depressed young man is about to hang himself at the beach, but then he notices something being drifted from the sea. It is the decaying corpse of some drowned young man around his age, and its status of putrefaction is pretty evident from the intestine gas frequently emanating from its anus.

Now it sounds gross to some of you, but the directors/writers Daniel Scheinert and Daniel Kwan make this scatological running gag work with considerable wit and imagination, and you can see right from the beginning that they are ready to do anything to make us cringe or laugh. As the corpse keeps drawing his attention, Hank eventually fails in committing suicide, and then he comes to enjoy a sort of jet ski with the corpse thanks to its seemingly bountiful amount of intestine gas. I initially found it too exaggerative, but I must confess that I also could not help but amused a bit as a guy whose intestine gas often demonstrates Newton’s Third Law on treadmill (It just smells while not boosting my running that much, by the way). 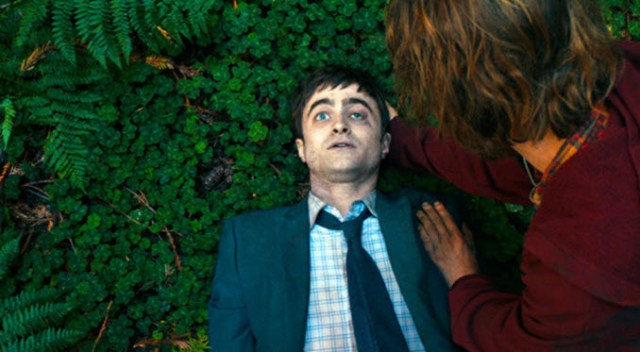 After being drifted away to some other remote beach area along with the corpse, Hank searches for any way out in a nearby forest while carrying the corpse on his back, and the corpse turns out to be pretty useful for him as a ‘multipurpose tool guy’. For example, it can function as a sort of water tank although its water quality is questionable to say the least in my opinion, and the movie has lots of morbid fun with how the corpse can be used in many different weird ways you have to see for yourself.

To Hank’s surprise, the corpse comes to gain its own consciousness at one point and begins to talk to him. While the movie is ambiguous about how that can be possible, Hank does not have much problem with this outrageous happening mainly because he is really in the need of someone to talk with. It may be merely his lonely delusion, but his talking corpse soon becomes his best friend anyway, and it even gets its name during their first communication.

‘Manny’ is played Daniel Radcliffe, who surely looks quite different from his most famous role here in this film. While maintaining his character’s unpleasant appearance as demanded, Radcliffe keeps his acting straight even during the silliest scenes in the movie, and we get several hilarious deadpan moments as Radcliffe wryly delivers his loony lines without any self-conscious wink.

His co-star Paul Dano, who has always been good at playing emotionally troubled characters as recently shown from “Love & Mercy” (2014), is convincing in his character’s quiet desperation, and he and Radcliffe click together well as their characters’ bizarre relationship is developed further with more offbeat humor. As Hank and Manny spend more time with each other in their isolated situation, Manny’s presence comes to spark Hank’s artistic instinct, and we get a series of amusing scenes as Hank freely projects his artistic sensibility onto Manny. With Manny, he does not feel lonely anymore, and he is more excited than before as decorating their own small world with various things which seem to come from those idiosyncratic films by Michel Gondry.

And we come to learn that Hank has had a crush on a young woman he happened to notice during his bus ride on one day. He was too afraid to approach to her, and he is still reluctant to express his feelings even at present, but he chooses to transfer his feelings to Manny. Through a number of cleverly staged moments, he provides Manny false memories of her, and one of these moments earned a giggle from me for being accompanied with John William’s score for “Jurassic Park” (1993), which is incidentally one of my favorite movie scores by Williams.

Unfortunately, the zany spirit of the movie begins to be decreased as it approaches to its inevitable narrative point. After all, this is basically a one-joke comedy, so it naturally starts to feel tiresome during its last act, and its last 15 minutes is particularly disappointing although it recovers to some degrees during its ending.

Even after the second viewing, I still have some reservation on “Swiss Army Man” because I observed its comic moments from the distance, but it does its job mostly well enough for my enjoyment despite its weak third act, so I guess I can recommend it especially if you are looking for something truly odd and weird. Regardless of whatever you may think of the movie, it is undeniable that Scheinert and Kwan show us something we cannot see everyday, and they certainly made an impressive debut to remember here. What will they possibly show us in next time, I wonder?

This entry was posted in Movies and tagged Friendship, Suicide. Bookmark the permalink.