Based on the book which was developed from one of numerous small details in the wondrous fantasy world created by J.K. Rowling, “Fantastic Beasts and Where to Find Them” gives us an engaging variation of elements familiar to many of us during its first half. I felt delighted and entertained by some of its good scenes, but I also came to be confused and disoriented as its weak, overstuffed plot tried to juggle too many things together, and I eventually became disheartened to see its second half being devolved into something I had to endure many times during this summer.

Its story is about an accidental adventure of Newt Scamander (Eddie Redmayne), a young British wizard who comes into New York City for some private business in 1926. As he arrives in the city by a ship and goes through the US customs along with other passengers, he has a little trouble with his seemingly plain suitcase, but he can easily hide whatever is contained inside that suitcase, even when a customs officer becomes a bit suspicious about it.

However, he inadvertently gets himself into a big trouble. When he is momentarily distracted by the anti-witch movement led by Mary Lou Barebone (Samantha Morton), one of the living creatures contained in his suitcase, called Niffler, manages to escape from the suitcase. Looking like a cross between mole and duckbill, Niffler has an irrepressible kleptomaniac tendency toward gold or shiny things, and it surely cannot resist its nature when it happens to sneak into a nearby big bank. 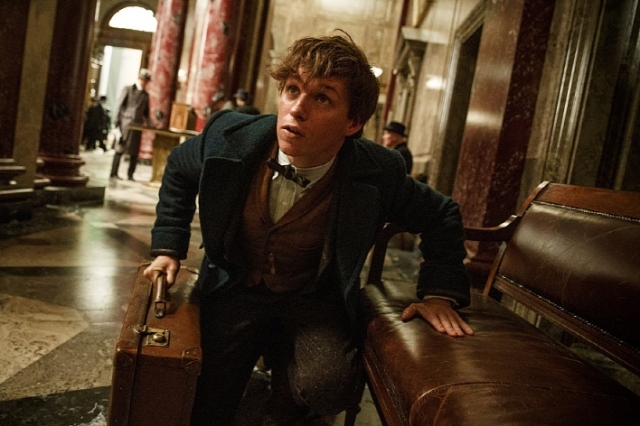 Once he notices that Niffler has escaped, Scamander follows it to the bank for preventing any possible problem which may draw the unnecessary attention of normal people without magic ability, who are called ‘Muggles’ in Britain while being called ‘No-Majs’ in US. While searching for Niffler, he comes to encounter a No-Maj factory worker named Jacob Kowalski (Dan Fogler), who comes with his suitcase to the bank for applying for business loan around that point. Thanks to Scamander, Kowalski happens to see what he is not supposed to witness, and the situation becomes more complicated when he manages to run away from Scamander with, of course, the wrong suitcase.

Even before fully grasping what is going wrong, Scamander is arrested by Porpentina “Tina” Goldstein (Katherine Waterston), a young woman who is a recently downgraded employee of the Magical Congress of the United States of America (MACUSA). She takes him to the MACUSA headquarters hidden somewhere in the middle of Manhattan, and we soon behold its busy inner space clearly imbued with the contemporary Art Deco style, which is one of the most impressive elements in the movie.

While Goldstein is eager to report Scamander to her superiors, President Seraphina Picquery (Carmen Ejogo) and other high-ranking officials do not care much about that mainly because they are currently dealing with a more urgent problem. A mysterious dark force is on the loose for no apparent reason, and this can endanger the magic world if it continues to create more havocs in the world of No-Majs. Percival Graves (Colin Farrell), the director of Magical Security, is determined to find its cause, but then it is revealed later that this shady, ruthless guy has some other plan behind his back, which is associated with Barebone’s adopted son Credence (Ezra Miller).

In the meantime, Kowalski gets himself more involved with Scamander after more creatures get out of Scamander’s suitcase. When he goes to Goldstein’s residence along with Scamander, he is introduced to Goldstein’s younger sister Queenie (Alison Sudol), and it does not take much time for them to be attracted to each other, though it is already ordered that his memories of Queenie and many other things he saw will be erased once the situation is over.

The movie works best when it focuses on awe and wonder, and that aspect is exemplified well by the sequence unfolded within Scamander’s suitcase, which actually contains a far bigger space than it seems on the surface. As various odd creatures appear here and there, we cannot help but admire rich, imaginative details, and then we get a couple of action sequences as Scamander and other characters try to retrieve a few escaped creatures.

However, Rowling’s adapted screenplay fails to establish enough narrative momentum to grab our attention to the end. Compared to Harry Potter or other colorful characters in the Harry Potter movies, the characters are relatively less distinctive although Eddie Redmayne and his co-performers convincingly inhabit their characters’ world. With his likable screen presence, Redmayne is certainly well-cast in his role, and it is nice to see Katherine Waterston getting more exposure through this movie after her solid supporting turns in “Inherent Vice” (2014) and “Steve Jobs” (2015). While Dan Fogler and Alison Sudol provide comical moments as demanded, Colin Farrell, Carmen Ejogo, Samantha Morton, Ezra Miller, Ron Perlman, and Jon Voight are seriously under-utilized due to their flat characters, and I must tell you that a certain well-known actor who plays the villain in the movie is far less impressive compared to Ralph Fiennes’ diabolical turn as Lord Voldemort in the Harry Potter movies.

The director David Yates, who directed no less than four Harry Potter movies, is no stranger to Rowling’s fantasy world, and he gives us a competent blockbuster product. Unfortunately, he lets its third act dominated by dizzy, bland CGI spectacles, and I did not get much fun or excitement while not caring a lot about how the story would end. I have been more tired of CGI actions in these days, and the climax sequence in the movie only confirmed my exhaustion, without any dramatic impact.

In conclusion, “Fantastic Beasts and Where to Find Them” is not as fantastic or spirited as it could be. After the screening during last night, I came to miss more the awe and wonder I observed from the Harry Potter movies, and I felt growing dissatisfaction although it was not a total waste of time. Now I am reminded of what Roger Ebert once said after watching “Harry Potter and the Half-Blood Prince” (2009): “There is still much to be revealed, but little to be discovered.”

This entry was posted in Movies and tagged Adventure, Fantasy. Bookmark the permalink.