“Don’t Breathe” does two things well as an exemplary thriller/horror movie. In the beginning, it takes some time to establish its modest ground for plot and character to engage us, and then it jolts us with a twisted reversal of the situation surrounding its few characters. After that, the movie steadily and efficiently pushes its story and characters into more horror and darkness to be revealed via its deadly, suspenseful cat-and-mouse game, and we do not mind even when it tries several usual genre clichés, which are effectively utilized here in fact.

The movie begins with a trio of small-time young burglars operating around the decrepit neighborhood of Detroit, Michigan. They are Alex (Dylan Minnette), Rocky (Jane Levy), and Money (Daniel Zovatto), and they are breaking into a posh residence when they are introduced to us during their first scene. Because Alex’s father is an employee of a security company which provides its service to numerous houses in their neighborhood, they can turn off the security system in the house right after their intrusion, and they are also discreet about what they are going to steal just in case.

We get to know a little bit more about them after they succeed again in their criminal activity. Like her two accomplices, Rocky has yearned to get out of their miserable neighborhood which has no future for them, and she hopes that she will amass enough money soon for leaving for a better life in California along with her dear young sister. While Alex has carried a torch for Rocky, this reserved young man mostly keeps his feelings to himself mainly because she seems to be closer to Money, who is your average cocky hoodlum with lots of swagger. 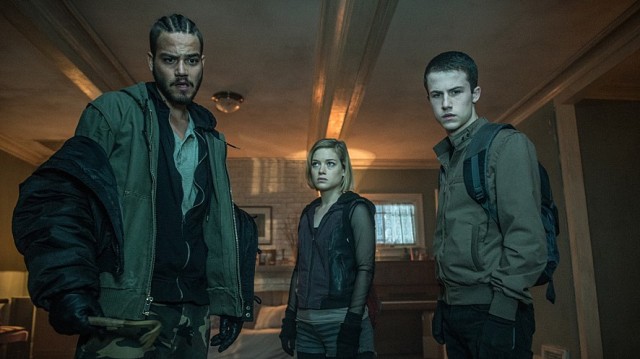 While their dream still seems to be out of reach, they come across a risky but tempting chance which may finally make their dream come true. There is an old veteran who has lived alone in his shabby house for years, and, according to a tip from Money’s criminal associate, this man has $300,000 in cash, which was given to him as a part of settlement after his only family member was killed by a car accident not so long ago.

Alex is reluctant because they will be in a much more serious legal trouble if they get caught during their attempt to steal such a big amount of money like that, but he eventually agrees to go along with his accomplices mainly due to his affection toward Rocky, and everything looks fine and easy as they do some reconnaissance around the old man in question before their break-in. Although the old man has a big dog which can be very loud and aggressive, it can be promptly sedated, and the surrounding area is quite remote because nearly all of nearby houses around the old man’s residence have been empty and abandoned. Besides, the old man is blind due to his battle injury.

When they attempt to break into the house at night, things initially go well as planned except several minor setbacks, but they soon come to realize they made a huge mistake when they happen to confront the blind old man, who turns out to be far more than a match they can handle. He is still a tough fighter with his remaining senses which have been heightened by his blindness, and, as implied during the disturbing prologue scene in the movie, he is not going to let his unwelcomed guests leave his house easily because of a dark, monstrous secret kept somewhere inside the house.

The director/co-writer/co-producer Fede Alvarez, who wrote the screenplay with his co-writer Rodo Sayagues, skillfully increases the level of dread and suspense through a series of well-made sequences to enjoy, and the result is more entertaining than his previous film “Evil Dead” (2013), which was a dismal and unnecessary remake of Sam Raimi’s classic 1981 horror movie (Raimi co-produced both that movie and “Don’t Breathe”, by the way). During one impressive long-take sequence unfolded around the characters and the interior of the house, the cinematographer Pedro Luque’s camera smoothly moves here and there to convey us the clear sense of space in advance, and Luque and Alvarez also make sure that the night scenes in the movie do not look too dim while looking dark and nightmarish as demanded. At one point, we get a frightening moment reminiscent of the climactic part of “The Silence of the Lambs” (1991), and we are completely involved in its non-blind characters’ helpless circumstance even though we can clearly see what may happen on the screen.

While its three young performers are competent in their respective roles, our attention is naturally drawn to Stephen Lang, a veteran actor whom I noticed for the first time through his excellent performance in “Last Exit to Brooklyn” (1989). Although his blind character becomes all the more unsympathetic later in the movie, Lang always keeps us on the edge as a formidable monster to terrify us, and his chilling performance mainly consisting of small and big physical nuances is as memorable as those barren, tarnished outdoor locations of Detroit, which contribute a lot to the moody and creepy atmosphere on the screen like they did in “It Follows” (2014), another notable recent horror film set around Detroit.

As a solid genre piece somewhere between “Wait Until Dark” (1967) and “Panic Room” (2002), “Don’t Breathe” is both scary and entertaining on the whole. The movie deftly and smartly plays with our expectation within its small ground, and I must confess that there were a couple of time I got genuinely frightened during my viewing. It is really terrible to be helplessly blind alone in darkness, you know.

This entry was posted in Movies and tagged Disability, Horror, Thriller. Bookmark the permalink.