Human relationship is a fragile and tricky thing to handle for anyone, and South Korean film “The World of Us” shows that kids are no less clumsy than most of us in developing and maintaining relationship. Closely observing one little bumpy relationship dynamically being shifted here and there around the wide spectrum of various clashing emotions, this small but fabulous coming-of-age drama immerses us into its young heroine’s small world via its seemingly simple, unadorned approach, and we come to emphasize a lot with her emotional struggles with her accidental school friend. We are amused by how innocent they are, but then we also watch how vulnerable they are to human emotions they cannot control well, and the movie touches us with its many modest but intimate scenes which are thoughtfully presented with admirable sensitivity and subtlety.

Its young heroine is an 11-year-old girl named Seon (Choi Soo-in), who is not that popular at her elementary school as shown during the opening scene. Nobody particularly wants to play along with her when her classmates are about to play dodge ball together at the school playground, and we see her virtually getting pushed out of the game not long after they begin to play.

Nevertheless, Seon actively tries to get closer to Bo-ra (Lee Seon-yeon), a popular girl in the class who does not give a damn about Seon while being usually surrounded by her class entourage. When she makes a rather transparent attempt in front of Bo-ra and other classmates, Seon manages to get the invitation to Bo-ra’s upcoming birthday party, but then, not so surprisingly, there comes a painful moment of embarrassment and rejection.

When Seon is about to leave the school on the last day before summer vacation, she comes across a student who has just been transferred to the school. Her name is Ji-ah (Seol Hye-in), and it turns out that she is assigned to Seon’s class, though it is already too late for her to introduce herself to her new teacher and classmates. After this brief encounter, Seon and Ji-ah quickly befriend each other mainly because both of them need someone to play and hang around with during their summer vacation, and Seon naturally feels happy and excited about this unexpected chance of friendship from a girl who looks much more active and confident than her.

While they enjoy each other’s company during their long hot summer days, we cannot help but notice how much different they are from each other in many other ways. When Seon goes to a place where Ji-ah lives with her grandmother, Seon is impressed by how it looks far more affluent than Seon’s humble family home, but Ji-ah casually tells her friend that her grandmother’s place does not look that good compared to where she lived before her parents’ divorce. Although Seon’s family is not dreadfully poor, the movie implies a considerable economic gap between Seon and many of her classmates, and that aspect is subtly conveyed to us through her plain attire and appearance as well as her parents who are frequently busy with their respective jobs.

As the summer is being over, things become complicated for both Seon and Ji-ah. They become drifted apart from each other especially after Ji-ah comes to spend more time on her study as her grandmother demands, and then we sense more of the growing strain and distance between Seon and Ji-ah when the new semester begins at their school. As a new girl in the class, Ji-ah instantly draws everybody’s attention with her confidence and sophistication, and that accordingly makes her look like someone to socialize with for Bo-ra and her cronies. Ji-ah comes to hang around with them more and more, and this change surely hurts Seon, who finds herself reverting to her usual ostracized status in the class. 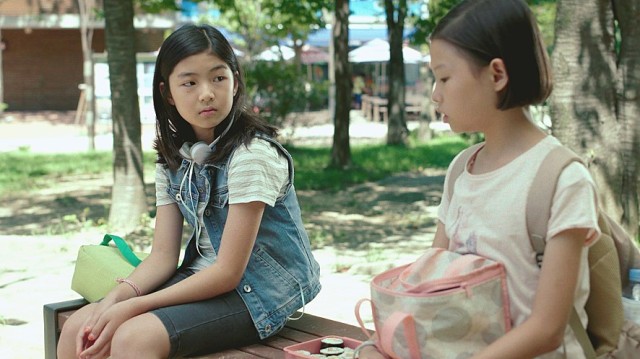 And that is just the prelude for numerous emotional fluctuations to be felt and observed during the rest of the story, and the movie keeps itself close to Seon as aligning itself with her limited viewpoint. As the camera is usually placed around her eye level, we come to pay more attention to what she thinks and feels, and we also gather some minor details from adult characters at the fringe of the story while they are mostly glimpsed through Seon’s viewpoint. We can only guess why Seon’s drinker father still feels so angry about his ailing father who is currently spending his remaining days at a hospital, and the same thing can be said about how Ji-ah’s parents came to divorce, while it is apparent during a brief scene that Ji-ah is not very happy about her parents’ divorce as well as her father’s new relationship. Although I noticed that there are also boys in the class, they are not shown much on the screen, probably because, well, our girls still need to grow up more to be interested in boys.

Carefully building up the churning emotional momentum behind its leisurely narrative, the movie vividly and realistically depicts its young main characters’ undulating mutual interactions, and the director/writer Yoon Ga-eun, who previously received the Crystal Bear Award for her sublime short film “Sprout” (2013) at the Berlin Film Festival, did a superb job of drawing natural performances from her three talented young actresses. Choi Soo-in and Seol Hye-in are spontaneous and impeccable as their characters pull or push each other on the screen, and Lee Seo-yeon is also fine as a mean girl who later turns out to have her own issues to deal with. While the adult performers in the film take a backseat as required, Jang Hye-jin deserves some praises as Seon’s caring mother, and she has a good scene where her character patiently tries to know and understand what is troubling her dear daughter lately. 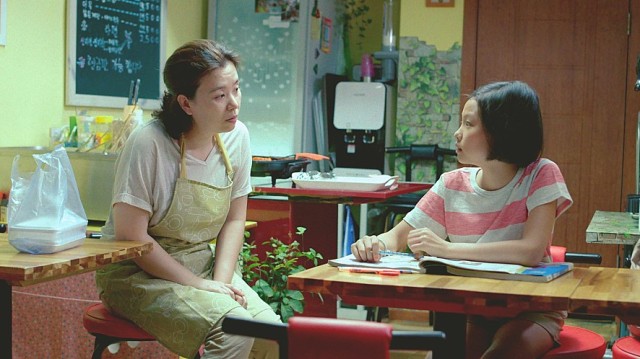 The movie is also humorous at times, and its humor mostly comes from Seon’s little brother Yoon, played by adorable young actor Kang Min-joon with bouncy innocence to win your heart right from his first appearance. During a certain crucial scene, Yoon says something so simple and wise to his sister, and I cannot help but admire how this scene is effortlessly handled to resonate with the following scene. I am now reminded again of what my late friend Roger Ebert once said about that consistently excellent quality of child performances in movies: “Maybe we are all born as great actors, but after a certain age, most of us morph into bad ones.”

“The World of Us” is specific in its background and details, but its coming-of-age drama feels universal as honestly and sincerely presenting familiar emotional matters of young heart. Sure, kids may make many big mistakes as being angry and inconsiderate, but they usually learn from their mistakes as growing up day by day, and the last scene of the movie delicately makes a good point of that while functioning as an almost perfect ending for its story and characters. Kids can do better than us sometimes, you know.