As the opening sequence of “10 Cloverfield Lane” is unfolded, we know that something bad will happen sooner or later. Everything looks mundane on the surface as its young heroine leaves her place, but the ominous score on the soundtrack suggests otherwise, and we become curious and nervous as the camera looks upon her car being driven alone on the road.

She is Michelle (Mary Elizabeth Winstead), and we come to gather that she is running away from a personal problem with her fiancé. When she is driving her car somewhere in a rural area of Louisiana during late evening, her car is suddenly hit by something, and she becomes unconscious as her car is tumbled out of the road. When she regains her consciousness later, she finds herself confined in a cell, and she is naturally alarmed by this unexpected circumstance.

She soon confronts a guy who is keeping her there. Howard (John Goodman) explains to her that he rescued her and then brought her to his underground shelter because an unknown massive attack happened not long after her car accident, but the guy does not look exactly trustworthy to Michelle as well as us. Sure, he took care of her injury, and maybe she should appreciate that, but why does this supposedly good Samaritan not only lock her in the cell but also chain her to the wall? 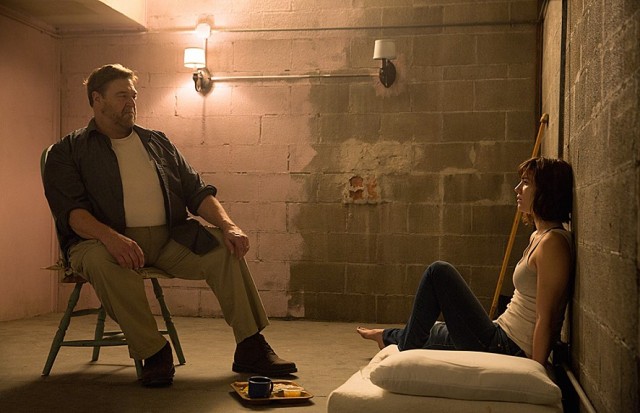 Anyway, Michelle is allowed to get out of the cell once she recovers more from her injury, and she meets Emmett (John Gallagher Jr.), another guy in the shelter. He tells Michelle about what he witnessed before he was fortunately allowed to go inside the shelter, so it seems they must stay in Howard’s shelter as long as possible for avoiding whatever is happening above them, but Michelle does not trust Howard or Emmett completely. There is something insidious about Howard’s behaviors even when he looks nice and gentle, and Emmett looks like one of those gullible guys who can be easily persuaded to believe whatever is told to them. Is Howard only a mere eccentric guy with cranky tempers? Is Emmett someone who can be trusted? And what is really going on outside the shelter?

Most of the entertaining moments in the movie come from how it smartly and deftly plays with this textbook thriller premise which could be used for a “The Twilight Zone” episode, so now I have to advise you to stop reading my review at this point for staying away from possible spoilers I may inadvertently reveal in the next paragraphs. I will try as much as I can for hiding its shocks and surprises, but this is a movie you will enjoy with maximum effect if you do not know much about what it is about or how it is about.

The movie has been advertised as a sort of sequel to “Cloverfield” (2008), but I do not think you have to watch the latter in advance, for they are different from each other in many aspects except a few little connections including their titles. While “Cloverfield” was a dizzy, interesting mix between found footage and monster movie, “10 Cloverfield Lane” is a steady chamber thriller packaged with several recognizable genre elements I don’t dare to reveal, and the director Dan Trachtenberg diligently builds up the level of suspension and dread among its three main characters as providing occasional moments of black humor to relieve the tension for a while.

It certainly helps that his movie has three talented performers who can keep us in its tightening grip through their convincing performances. Mary Winstead Elizabeth, an actress who deserves more attention considering her solid work in “Smashed” (2012), is engaging to watch as her character tentatively deals with her unstable situation, and we come to root for Michelle more especially when she shows considerable resourcefulness through her particular set of skills. Her situation may be another case of ‘woman in danger’, but Winstead imbues pluck and intelligence into her character as she did in “The Thing” (2011), and that is the main reason why the third act of the movie works to some degrees despite its weaknesses.

On the opposite, John Goodman, a dependable character actor who has always been a welcoming presence in many films since his breakthrough turn in the Coen brothers’ “Barton Fink” (1991), clearly has a lot of juicy fun with his increasingly sinister character. He is captivating especially when he fluidly switches between contrasting modes during one crucial scene, and we become more fearful of whatever his character may be holding behind his hefty back.

As another key part of the story, John Gallagher Jr., a Tony-winning actor who has been gaining more notice since his supporting turns in TV series “The Newsroom” and overlooked gem “Short Term 12” (2013), balances himself well between his two co-stars. As the plot thickens, he makes his character more sympathetic than expected, and there is a small poignant scene in which Emmett tells Michelle about how he regrettably let himself waste his potentials in the past.

While I do not like its third act much because it becomes more predictable with unoriginal genre elements compared to the first two acts, “10 Cloverfield Lane” still is a smart entertainment movie which values story, mood, and character. Unlike the Paranormal Activity series, the movie does not make a dull mistake of repeating same things we saw before, and, considering its enjoyable success, I think we can expect another good entry to follow after this.

This entry was posted in Movies and tagged Disaster, SF, Thriller. Bookmark the permalink.