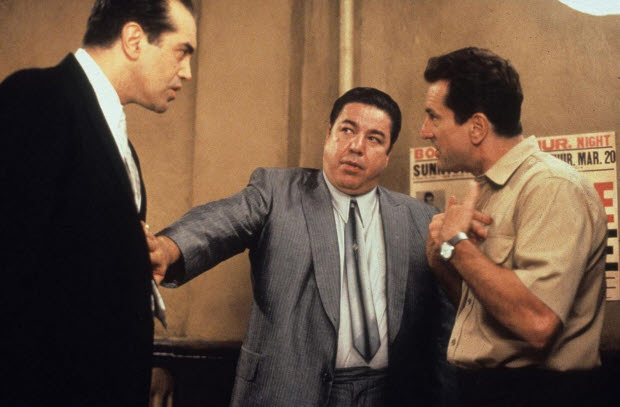 Any good coming-of-age tale is bound to be evaluated by two questions. What happens to our young lead character in the end besides looking older on the surface? And what happens to us as observing that inevitable process of maturation? While the hero of “A Bronx Tale” recounts nostalgic memories of his early years, the movie takes us into his small world through its intimate drama and strong characters, and we see how much he was influenced by his two different father figures. As we become involved in their story, the relationships among these three main characters turn out to be more complex and poignant than we thought, and we are deeply moved when our young hero comes to learn some important lessons he will keep for the rest of his life.

It is 1960, and Calogero Anello (Francis Capra) is a 9-year-old boy living in the Italian neighborhood of Bronx. Although his parents Lorenzo (Robert De Niro) and Rosina (Kathrine Narducci) keep telling him that he should stay away from a bar located right next to their modest apartment building, Calogero cannot help but attracted to that place because most of its patrons are local mafia members led by Sonny LoSpecchino (Chazz Palminteri), an assured, charismatic boss who is the de facto owner of the bar. The way these colorful figures are introduced to us one by one through Calogero’s viewpoint is reminiscent of a similar scene in Martin Scorsese’s “Goodfellas” (1990); like young Henry Hill in that scene, Calogero watches neighborhood gangsters from the distance with innocent awe and fascination, even though he knows that they are not good people.

On one day, Calogero happens to witness a sudden killing committed by Sonny right in front of his eyes under broad daylight. When two cops come to him for identifying the killer in question, Calogero chooses not to reveal what he saw because, besides that forbidding stare Sonny gave to him at that very moment, he does not want to be a squealer, but he later wonders whether he made a right choice. Lorenzo, who does not want to get involved with Sonny under any circumstance, respects his son’s decision: “You did a good thing for the bad man.” 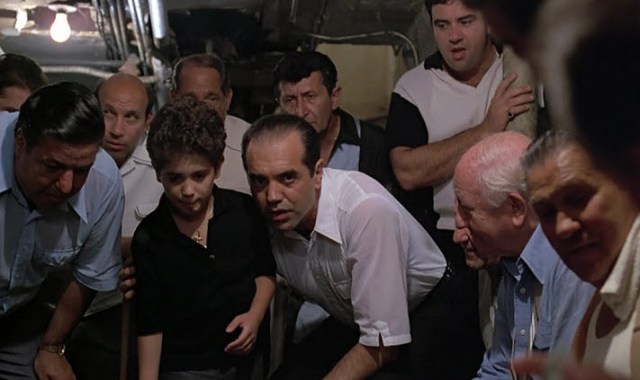 Not long after that incident, Sonny lets Calogero into his world as showing his appreciation, and Calogero is excited by this opportunity. While frequenting the bar more than before, he becomes another usual figure in the place, and he also enjoys his changed status in the neighborhood. At one point, he is allowed to participate in craps under Sonny’s guidance, and he has a really fun time along with Sonny and others as getting more money than he ever imagined.

Of course, Calogero’s parents are not so pleased to see their son being involved with Sonny. Lorenzo eventually confronts Sonny, but their conflict, which is put into a sort of cessation after that confrontation, does not turn out to be as simple as we thought. Although they are opposed to each other due to their different values, but both of them care about Calogero, and they are sincere when they respectively impart to Calogero their life lessons to guide and help him. While exemplifying working-class virtues through his diligent work, Lorenzo constantly reminds Calegro of what his son can do for a better life out there (“Nothing is more tragic than a wasted talent.”). Although he has many vices as a dangerous criminal, Sonny has his own streetwise wisdom, which can be distilled into a seemingly cynical but undoubtedly incisive motto often uttered by himself (“Nobody cares.”).

We identify more with their fatherly concerns as Calogero, now played by Lillo Brancato Jr. and usually called “C”, grows up more 8 years later. He still hangs around his childhood friends as usual, and we see potentials for trouble from Calogero’s friends especially when they casually show their racism toward African American people living near their neighborhood. Being more sensible than his friends, Calogero does not like this at all, but he cannot just walk away from them because, like many kids around his age, he is not so willing to think and act independently. 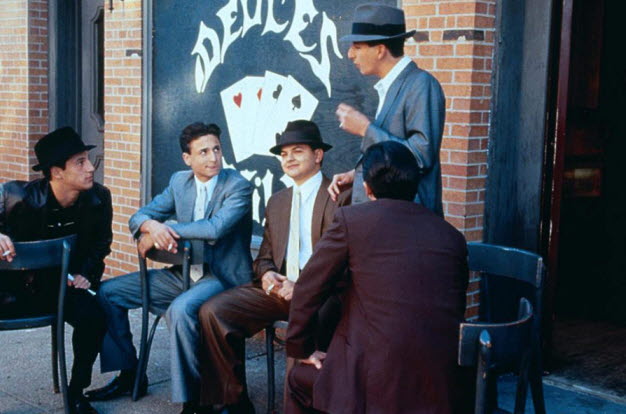 But then there comes a point where he has to make up his mind for himself. During his usual bus ride with his father, Calogero happens to notice a pretty African American girl in the bus, and then he sees her again at his school. After he spends a little private time with Jane (Taral Hicks), his heart is fluttered more than before, while also troubled by how his first love may be regarded by others around him.

Naturally, he seeks advices from both Lorenzo and Sonny, and how he gets their respective advices is one of the most humorous moments in the film. When Calogero asks a rather indirect question to Lorenzo, the father is not easily fooled by that, and he gives an equally indirect but wise advice to his son. In case of Sonny, Calogero tells him more openly about his interracial romance, and Sonny gives him a straightforward counsel along with a dating tip which, in my humble opinion, is far better than whatever you read from those throwaway self-help books about relationship. Their advices may sound different on the surface, but they both point out the same thing to Calogero, who soon comes to see that they are right.

The movie is based on the one-man show of the same name written by Chazz Palminteri, who also adapted it for the film. After getting fired from a club bouncer job due to his small mistake involved with famous agent Swifty Lazar, Palminteri, who was having a hard time as a struggling New York actor during that period, decided to write a story inspired by his early life in Bronx, and the eventual outcome led to the first major success in his career, which was then followed by a number of enjoyable movie performances including his wry Oscar-nominated supporting turn in “Bullets Over Broadway” (1994). 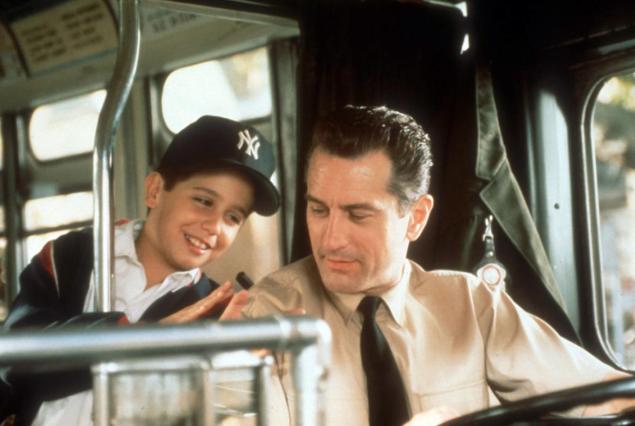 As reflected by Palminteri’s real name, Calogero Lorenzo Palminteri, Calogero in the movie is the fictional counterpart of his younger self. Palminteri’s father Lorenzo was really a bus driver. Sonny is based on a local mafia boss who was close to young Palminteri. Some of other characters in his story are also based on local figures he knew during his early years. In case of an amusing supporting character as unlucky as William H. Macy’s character in “The Cooler” (2003), he was actually played by his real-life counterpart, and, not so surprisingly, it looked like the guy really brought bad luck to the production just like his character (It is small wonder that his character does not get himself into any serious trouble despite his uncanny losing streak).

Palminteri’s nuanced performance in the film presents Sonny as a compelling human character to watch. Like his real-life counterpart, he is a smart, intelligent man who could be a more productive member of society if he had grown up in a better environment. While he can open his heart a little to the boy he probably loves more than he admits, Sonny is still a creature of crime and violence who chose a tough, lonely life on his mean streets, and, as he flatly admits later in the story, he has accepted and lived with the price for that in the name of survival.

In addition to giving a performance as warm and thoughtful as his recent appearance in “The Intern” (2015), Robert De Niro also directed and co-produced the movie, which was dedicated to his father who passed away not long before it was released. This was his first attempt on directing, and, considering what he accomplished here, it is a shame that he made only one feature film since that. Thanks to the authentic period mood in his movie, we get enclosed in Calogero’s small world right from the start, and we come to notice more of social changes brought into his neighborhood during the 1960s. We may not be surprised about what inevitably happens between Calogero and Jane, but we are shocked when he makes a regrettable mistake in front of her, and their tender but fragile relationship indirectly reminds us that racial tension is still a relevant social issue in the American society even at present.

De Niro also makes a good use of various popular songs from the 1950-60s. I enjoyed a couple of nice doo-wap scenes which reminded me of what I saw from Clint Eastwood’s passable musical film “Jersey Boys” (2014), and I liked how one of the famous songs by the Beatles was used as the prelude for a violent payoff during the sequence involved with a bunch of biker gangs who unwisely dare to mess with Sonny. As a matter of fact, De Niro and Palminteri recently worked together with Alan Menken for the stage musical version, which had its premiere in New Jersey early in this year.

Between De Niro and Palminteri, Francis Capra and Lillo Brancato Jr. function as the heart of the film. Their performances are seamlessly connected together, and what happened to each of them during subsequent years ironically mirrors its story. In contrast to Capra, who has been steady with his acting career while looking a lot different now (he played that biker character in TV series “Veronica Mars”, by the way), Brancato got himself tumbled down into serious troubles including addiction and murder, and some of you probably heard about his recent parole in 2014. As watching the YouTube clip of the Q&A session followed by the screening of the film at the 2015 Ebertfest, I could not help but notice how little Palminteri said about him while gladly talking about Capra and other performers in the film.

While tense and gritty at times, “A Bronx Tale” is a sweet, funny, and touching coming-of-age story thanks to its vibrant mix of humor and drama. Its last act feels a bit hurried as it goes through a series of intense moments during a relatively short span of time, but that works mainly because it is still driven by characters and human relationships instead of plot contrivance. Although there is an expected ‘fallen idol’ moment around the climax, it comes with real emotional impacts because of what has been established and built up to that point, and then we get another powerful moment as the story makes a full, satisfying narrative circle coupled with karmic poetic justice and the good cameo appearance by a certain recognizable actor. Sonny may not care, but Calogero and a few others care anyway – and so do we. 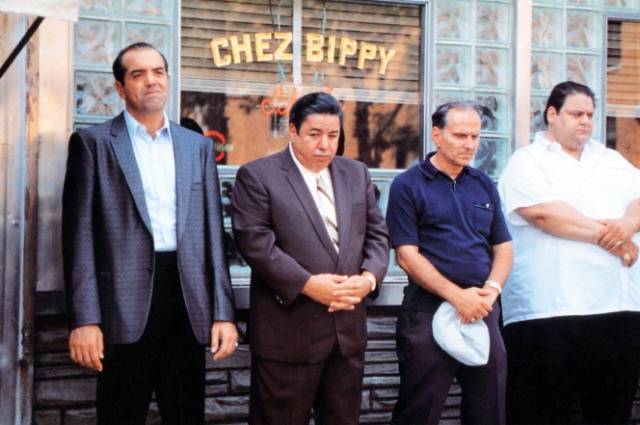 This entry was posted in Movies and tagged Coming-of-age drama, Father and son, Friendship, Mafia, Romance. Bookmark the permalink.