I remember well when I encountered those lovely stop motion animation works from Aardman Animations for the first time during late 1990s. Three short animation films featuring Aardman’s iconic characters Wallace and Gromit, “A Grand Day Out” (1999), “The Wrong Trousers” (1993), and “A Close Shave” (1995), were belatedly introduced to South Korean audiences in 1997, and I could get a chance to watch them all when they were later released together on VHS. They were very funny indeed with many quirky touches to savor and appreciate, and even my mother, who is usually not interested much in animation film, was entertained a lot by that insanely exciting model train sequence in “The Wrong Trousers”, which deservedly won Best Animated Short Film Oscar in 1994.

If you have seen “A Closed Shave” (it also won an Oscar in 1996), you surely remember a scene-stealing supporting character named Shaun, a small but smart sheep who heroically saved the day when Wallace and Gromit and other characters were literally running from a grave (but hilarious) danger during the climax scene. He returned in 2007 with his own TV animation series “Shaun the Sheep”, and the enduring popularity of the TV series led to the production of its movie version.

The movie version of “Shaun the Sheep” is essentially a series of comic slapstick situations following one after another. Shaun, who has been the leader of his herd in a rural British farm named Mossy Bottom Farm, is bored as usual while he and other sheep are taken care of by the Farmer, a slow-witted guy who is pretty oblivious to what his sheep are doing behind his back. On one day, Shaun comes upon a nice idea for having a break while not hindered by the Farmer or his fastidious dog Bitzer, and he and his friends quickly embark on his rather mischievous plan. 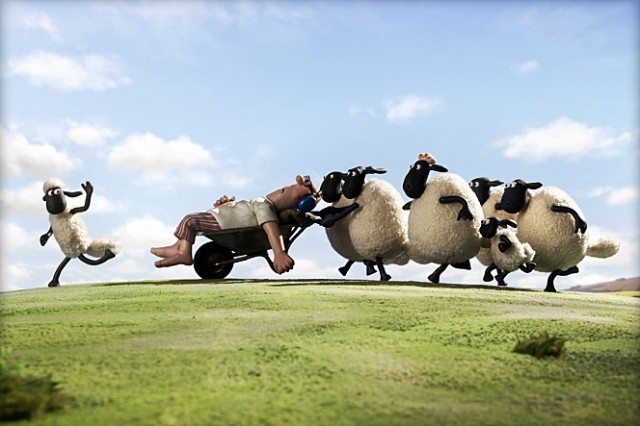 Shaun’s plan seems to work well at first as they successfully put their owner into sleep in a clever way you must see for yourself, but then it unexpectedly results in a very messy circumstance. Not long after they put the Farmer in a trailer in the farm, the trailer happens to slide away from the farm, and it takes him to the Big City in the end. Although Bitzer instantly goes after his master, Shaun comes to decide that he should also go to the city for finding the Farmer, and then he finds himself accompanied by his fellow sheep shortly after he arrives in the city.

Many moments during the rest of the movie are too funny and entertaining to describe to you in details, so I will tell you mostly about the problematic circumstance which Shaun and the other characters in the film fall into. The Farmer unfortunately suffers memory loss at the end of his bumpy ride to the Big City, and he is taken to the hospital while still having no idea on who he is. Bitzer, who may be less intelligent than Gromit but is a pretty resourceful dog none the less, attempts to take his master out of the hospital, and there is a very hilarious moment when he happens to be tasked with a job not licensed for any dog in the world.

Meanwhile, Shaun and his fellow sheep unluckily comes to draw the attention of Trumper, a guy from the Animal Containment Center. Thanks to Shaun’s another clever idea, he and other sheep manage to hide themselves from not only Trumper but also other people in the city as keeping searching for the Farmer, but there is always the danger of being exposed in public, and Trumper, who is as mean and cantankerous as Mrs. Tweedy in “Chicken Run” (2000), is always ready to catch and then throw them all into his prison where other unfortunate pet animals are incarcerated.

It is exhilarating to watch how this comic adventure story keeps rolling with more jokes and laughs for us, until it finally reaches to the climax sequence preceded by an amusing reference to a certain famous Monty Python joke. All animal and human characters in the film do not speak while only making sounds when they ‘talk’, but everything in the story can be clearly conveyed even to young audiences through facial expressions and body languages (this is an animation film where you do not need subtitle at all).

While it is partially assisted by CGI, “Shaun the Sheep” is still a traditional stop motion animation film, and its clay figure characters are imbued with each own personality through those tiny details in their appearances and wordless expressions. Making a stop-motion animation work in feature film length is surely not an easy job at all, and you will admire its clay figure characters’ seamless physical movements if you are familiar with that slow, painstaking process in the making of a stop motion animation film (According to its IMDB trivia section, 20 animators worked on the film, and each of them produced 2 seconds of footage per day). Besides our lovable woolly hero, many of the other animal characters in the film are likable in each own colorful way, and the same thing can be said about the Farmer, who gets his own funny moments when he unwittingly causes a trend which goes viral on the social media.

Although “Shaun the Sheep” often feels like being more or less than a special TV episode, that is just a minor complaint considering its effortless charm and bouncy spirit. Like “Chicken Run”, “The Curse of the Were-Rabbit” (2005), and “The Pirates! In an Adventure with Scientists” (2011), this is another enjoyable work from Aardman Animations, and I certainly hope for Shaun and his friends’ next adventure.

This entry was posted in Movies and tagged Animation Film, Comedy, Farm, Sheep. Bookmark the permalink.