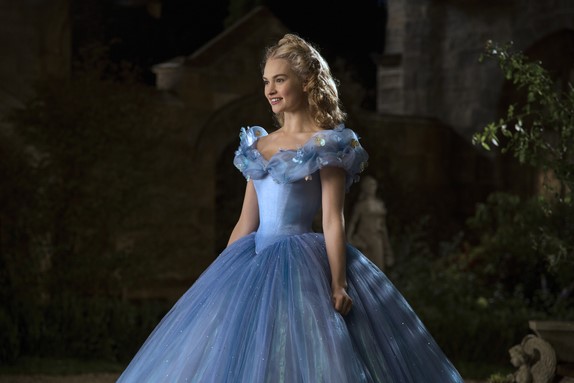 “Cinderella”, another adaptation of a famous fairy tale known well to most of us, takes a straightforward approach to its original story, and that is sort of refreshing to me after many revisional versions of fairy tales I encountered at the movies during recent years. While we all know what will happen in the end, the movie has a number of nice touches in the story as being decorated with style, humor, and a bit of magic and wonder, and the result is a likable Disney family movie with enough fun and charm for both young audiences and their parents.

Lily James, a young British actress who fills her character with lots of warmth and pluck in her amiable lead performance, plays Ella, a kind, warm-hearted girl who always remembers her dying mother’s last words as the motto of her life. Ella’s mother (Hayley Atwell), who died early due to her sudden illness when Ella was a little precious girl, told Ella that she should never lose the ability to be kind and courageous, and Ella certainly grows up to be a young woman her mother would be proud of. She usually brightens up the mood of her household through her sunny, optimistic personality, and she is kind and generous even to a quartet of mice in her big house.

Her loving father (Ben Chaplin) has lived for his dear daughter since his wife’s death, and they have been happy together for many years, but he recently begins to consider marrying again for a practical reason. When he brings out this matter during his private conversation with her, Ella gladly encourages her father’s decision because she cares about her father’s happiness as much as he hopes the best for his daughter. 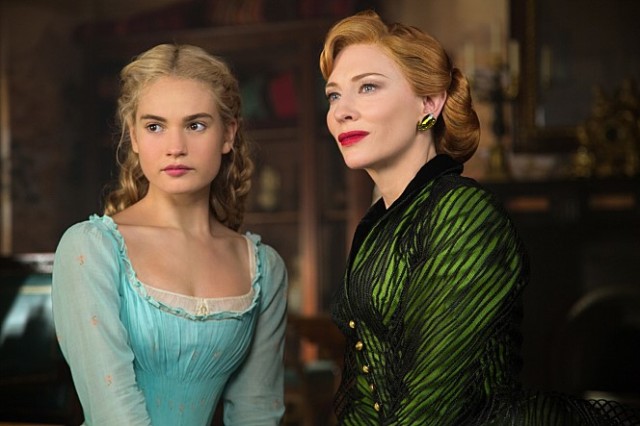 Ella is ready to welcome her father’s second wife who is a widow left alone with her two daughters after her first husband’s death, but Ella’s stepmother is a mean, selfish lady who only regards Ella as someone disagreeably standing on her way. While her character is on the lightweight level compared to other memorable Disney villainess such as Maleficent or Cruella de Vil, Cate Blanchett has a fun with her character’s vicious side thinly veiled behind her expensive dress and duplicitous smile, and we also cringe at the sight of Ella’s two horribly superficial stepsisters, who are broadly played by Sophie McShera and Holliday Grainger on the level of sheer caricature.

After Ella’s father unexpectedly dies during his another business trip not long after his second marriage, Ella’s stepmother begins to abuse and exploit her stepdaughter with no hesitation. Besides being sent to the attic which is going to be her new place, Ella is treated as more or less than a mere housemaid by her stepmother and stepsisters, and we also see how she happens to get her new name at one point. As a strong-willed girl who never stands back from adversities, Ella manages to keep her spirit high in spite of this unfair mistreatment for a while, but then she finds herself being near the breaking point when she is cruelly prevented from going to a grand ball to be held at the royal palace.

Of course, that is the point where Fairy Godmother (Helena Bonham Carter in cheerfully dotty mode) suddenly appears right in front of our unhappy heroine, and you know the rest of the story. There is an expected magical moment of transformation for Ella and other animals who willingly assist her ride to the royal palace, and then we get the series of gorgeous moments full of sumptuous production design and exquisite costumes by the courtesy of multiple Oscar winners Dante Ferretti and Sandy Powell. The cinematography by Haris Zambarloukos is deft in its fluid movement around sets and costumes, and Patrick Doyle, who has steadily collaborated with the director Kenneth Branagh since Branagh’s directorial debut work “Henry V” (1989), provides a number of excellent pieces of dance music for this part. 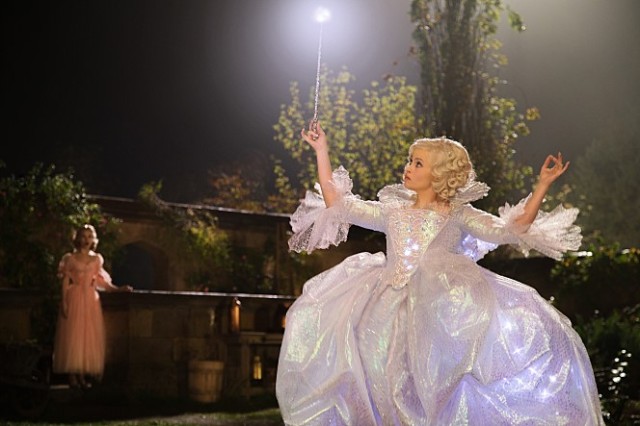 While there surely comes Prince Charming for Ella (is that a spoiler to you?), the screenplay by Chris Weitz adds more substances to the relationship between Ella and Prince (Richard Madden). They already came across each other before in a forest near Ella’s house, and it was a love at first sight for both of them although they hid their respective identities from each other at that moment. Prince was charmed by her beauty while also touched by why she tried to spare a stag he and others were hunting, and Ella saw a man of decency and honesty from this handsome ‘apprentice’.

When they meet again at the royal ball, they are confirmed of their mutual feeling as having a chance to spend their own private time together, but then such a happy moment quickly passes by as the clock is about to chime midnight. In addition, Prince may have to marry someone else for the future of his small kingdom, and that puts another complication into their situation. The King (Derek Jacobi) clearly sees what his son’s heart wants from the very beginning, and there is a small moment of poignancy later in the story when he gives a sincere advice to his son as a dying man with very little time to live.

Compared to “Thor” (2011), a bland, colorless superhero film which was also one of the lowest points in the ongoing Marvel Comics franchise in my opinion, “Cinderella” shows Kenneth Branagh back in his usual colorful mode of grandeur and exuberance we saw from his brash adaptations of Shakespeare works. The movie is packed with considerable amount of flair and energy under his skillful direction, and I was entertained by its visual moments while also caring about the story. This may not be the definite version to replace the 1950 Disney animation, but it is a lovely version with gentle heart behind its nice efforts. 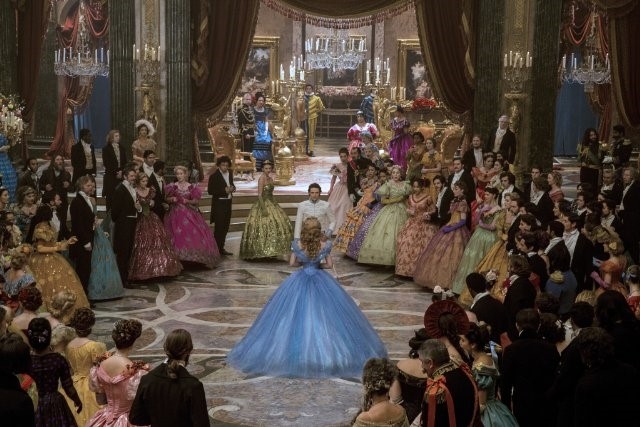 This entry was posted in Movies and tagged Fairy tale, Family, Fantasy, Romance. Bookmark the permalink.