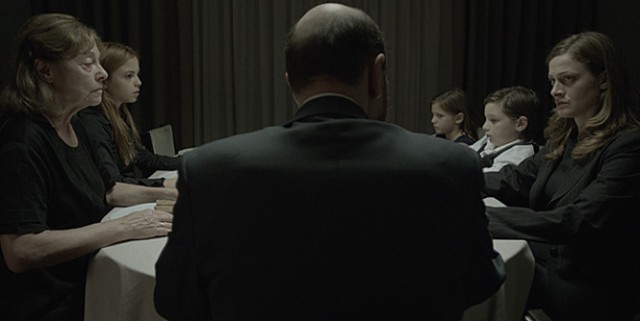 They look like a quiet, normal family at first, but there is something wrong about this family. Even after a terrible incident which would devastate any other normal families, they just move on with their daily life as if they have already gotten over from it, and this abnormally calm mood of their household becomes more disconcerting to us as the darker sides of their family life are revealed step by step in front of us.

Greek film “Miss Violence” works mainly due to its cold, distant attitude in its storytelling, and its disturbing scenes from this strange family are depicted with considerable power to impress us. It observes its characters’ unpleasant behaviors with clinical fascination, and it tightly holds our attention even when we are shocked and disgusted later by what is hidden behind their ‘normal’ appearance.

The movie begins with that terrible incident which happens in the middle of a birthday party. While all other family members including her mother, her grandparents, and her siblings seem to be having a good time with the party, the 11-year-old heroine of the party, Angeliki(Chloe Bolota), does not seem to be very happy, and then, for some unknown reason, she suddenly jumps off the balcony of the family apartment when no one is watching her.

After that, we see her grandparents(Themis Panou and Reni Pittaki) having a talk with a policeman on their granddaughter’s death, and we cannot help but notice how unusually calm and composed they are even though they have just lost their granddaughter. They merely insist that it was only an unfortunate accident, and her grandfather cleans and empties Angeliki’s room after that conversation – and no one in the family objects to his decision.

As the family continues their daily life as before, we get to know a little more about other family members in the household. Angeliki’s mother Eleni(Eleni Roussinou) has two other kids, but she does not tell a lot about how she came to bear her children, and now she is pregnant again. In the case of Eleni’s teenager sister Myrto(Sissy Toumasi), she is more like a sister to Eleni’s children rather than an aunt, and she sometimes shows her rebellious sides although she has probably never imagined about living outside.

And we come to see that the household has been strictly regulated by their stern, oppressive father who is also virtually a father figure to Eleni’s kids. While he seldom raises his voice, no one questions his authority when he orders, and he harshly punishes his daughters and grandchildren whenever they step out of line. When Myrto is late for family dinner, she is not allowed to have a meal with others. When he is notified by the school principle that his grandson Philippos(Constantinos Athanasiades) has been causing troubles at his school, he has Philippos slapped again and again by his granddaughter Alkmini(Kalliopi Zontanou) for his bad behaviors. Although they are living in an urban apartment building and are not completely isolated, they are not that friendly with their neighbors as shown during one brief scene, and it sometimes feels like he is the only connection between their claustrophobic home and the world outside.

As observing how this guy oppresses his family in the name of stability, we slowly begin to sense a certain dark possibility lurking inside the household, and we are more disturbed by how he takes care of his daughter’s recent pregnancy. While mostly looking stiff and nervous all the time, Eleni does not seem to want to talk about how she got pregnant, and her parents do not talk about that much either. Her father takes her to a clinic for medical examination, but then he also pays one of his friends to register himself as the biological father of the baby to be born, so we naturally come to wonder about the motive behind this suspicious behavior of his. Does he know who impregnated her? Or does he just want this matter to be taken care of in a less complicated way?

The movie eventually exposes an awful secret behind him and other family members, but it never loses its cool composure even during its most atrocious moments, and one of them is especially handled well with admirable restraint while fully delivering the shock inside it to us. I will not go into details, but let’s just say a certain character’ disturbed face right after this scene is more than enough for us to imagine what happened to that character – and guess what will probably happen next.

The director/co-screenplay writer Alexandros Avranas, who received the Best Director Award for this movie at the Venice International Film Festival in last year, maintains well the uneasy feelings surrounding his characters under his austere direction, and the actors dutifully tunes their good performances to the overall detached mood of the film(Themis Panou received the Best Actor Award at the Venice International Film Festival for his particularly chilling performance). The cinematographer Olympia Mytilinaiou’s camera ably captures the interactions between characters in uninterrupted fashion even when it is moving around them, and there is a nice longtake scene involved with the visit from a pair of social workers, who apparently sense something bad from the family during their interview but do not directly voice their suspicion for the lack of proof to confirm it.

As others have pointed out, “Miss Violence” shares several common elements with Giorgos Lanthimos’ “Dogtooh”(2009), another cold, disturbing domestic drama from Greece which also has a father who places his family under his cruel, heartless restraint. While that movie sort of works as a black comedy through its more outrageous premise, “Miss Violence” strikes us hard with its dark, serious moments, and then we are left with its ambiguous but haunting finale which can be interpreted in different ways. Where there is oppression, there is counteraction in the end, but then it may lead to another cycle of oppression to be repeated.

This entry was posted in Movies and tagged Domestic Abuse, Family. Bookmark the permalink.