While you may have to watch previous Marvel Comics movies before watching it, “Captain America: The Winter Soldier” is a surprisingly entertaining entry packed with fun, thrill, and a considerable dose of intrigue, and that was good enough for me to put aside my constant skepticism toward the Marvel Comics franchise for a while. As a well-made blockbuster film, it has several spectacular action scenes to excite the audiences, and, thanks to its engaging mixture of comic book action and espionage thriller, it is actually interesting to watch even when it is not on its bombastic action mode.

The movie follows the new adventure of its earnest superhero Captain America/Steve Rogers(Chris Evans), a good, brave young man who was transformed into a super soldier through a special military experiment during the World War II as depicted in “Captain America: The First Avenger”(2011). At the end of that film, he found himself in the 21th century after long years of his unintended hibernation in the North pole area, and we later saw how he came to work with other Marvel superhero characters to save the Earth in “The Avengers”(2012).

Two years after that humongous catastrophe in Manhattan shown in the climax part of “The Avengers”, Rogers is now residing in Washington D.C., and he still feels like a fish out of water. While he is not very familiar with lots of things including Steve Jobs or Marvin Gaye, many people he knew are mostly gone as he is reminded at a museum, and we get a small, poignant scene where Rogers visits Peggy Carter(Hayley Atwell), who is no longer a pretty plucky woman he once loved during their war time.

At least, under the supervision of SHIELD director Nick Fury(Samuel L. Jackson), Rogers has works to do as Captain America, but, after his latest operation on a hijacked ship belonging to SHEILD, Rogers begins to wonder about what is going on inside SHIELD – and what he is really doing as its agent. While a big secret project involved with three newly developed Helicarriers(you remember that huge aircraft carrier in “The Avengers”?) is nearly approaching to the final step, Fury seems to have some thoughts behind his back, but he is not someone who would easily tell what he thinks, and Rogers is certainly not very pleased about that. 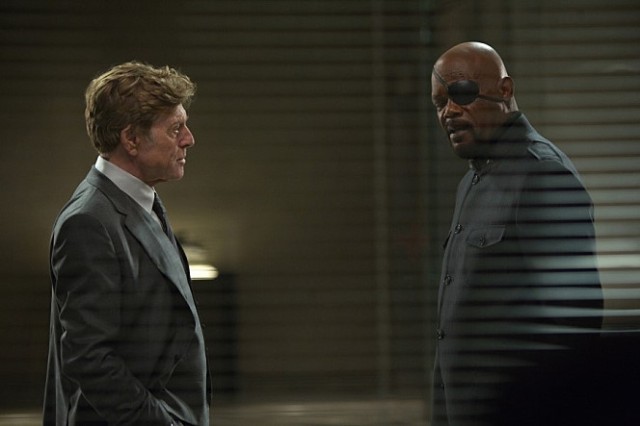 He soon finds himself in the new water. Along with Fury and a few other characters, Rogers faces a big threat which may topple the very existence of SHIELD, and Rogers suddenly becomes a hunted man running away from his agency because of a crucial clue he receives from Fury. As a senior SHIELD official directing this sudden manhunt, Robert Redford amply imbues his authoritative character with the aura of suspicion even when he does not seem to do much on the screen, and that naturally takes us back to a good old paranoid spy thriller like “Three Days of the Condor”(1975), where Redford played a young agent who must find a way to survive with almost no one to trust.

Like Redford in that film was helped a lot by Faye Dunaway’s character, Rogers gets a considerable help from his fellow fugitive Black Widow/Natasha Romanoff(Scarlett Johansson), a former Russian agent who has been working for SHIELD. After her thankless job in the previous Marvel Comics movies, Johansson finally gets a good chance to shine in this film; her spunky performance effectively complements Evans’ sincere performance as Romanoff and Rogers investigate to find who is really behind the threat, and Johansson has a fun with her character especially when she surprises others and us through her clever tactics.

With the screenplay by Christopher Markus and Stephen McFreey, the directors Anthony and Joe Russo roll the story under their competent direction, and the movie gives us a fair share of nice surprise turns including the first appearance of Winter Soldier(Sebastian Stan), Captain America’s main opponent who is probably his counterpart in many aspects. I was not very impressed by the action scenes in the film due to its confusingly choppy editing approach, but some of them are exciting enough to hold our attention, and we do not feel lost as several things are separately happening during the big obligatory climax action sequence decorated with lots of bangs and crashes as required.

Chris Evans, who impressed me a lot with his performance in “Snowpiercer”(2013) in last year, is commendable in the title role. While he surely looks less silly than before thanks to his new modernized uniform, Evans brings comfortable likability to his simple-minded character as before, and we are not surprised by how he quickly befriends Sam Wilson(Anthony Mackie), a war veteran who eventually becomes Rogers’ closest ally along with Romanoff. Like Scarlett Johansson, Samuel L. Jackson and Robert Redford have their own good moments, and Cobie Smulders is also solid as Maria Hill, Fury’s trusted agent we previously met in “The Avengers”. Some of you may enjoy several references on “The Avengers” and other Marvel Comics films sprinkled throughout the movie, but I must say that they usually made me wonder about what the hell other superheroes are doing when the lives of at least 20 millions of people around the world can be lost(Tony Stark is one of them, incidentally).

“Captain America: the Winter Soldier” tries something different within its boundaries, and I enjoyed it more than I expected. While its predecessor is an old-fashioned fun which was also a good start, the movie finds another way to handle its Boy Scout hero as dealing with some thought-provoking topics relevant to our reality, and it also willingly makes several risky moves which will probably affect subsequent Marvel Comics movies. For now, in my opinion, this is the most entertaining movie from the franchise in recent years, and I think I can have some hope on whatever will come next despite my remaining skepticism.

1. The end credit is accompanied with two small scenes promising us the next movies to come, so please stay during the end credit if you want to see them all.

2. The movie is also shown in 3D, but, as I have pointed it out many times before, 3D is not an ideal choice for action movies like this. Save your extra charge, please.

This entry was posted in Movies and tagged action, Conspiracy, Espionage, Superhero. Bookmark the permalink.