As the chronicle of a historical event which was one of the defining points during the Arab Spring, Oscar-nominated documentary “The Square” throws us right into the Egyptian Revolution of 2011 and its aftermath. Through its close and intimate look at the rise and fall of the revolution during two and half years, it follows the ups and downs during that tumultuous period, and we come to see how the revolution eventually arrived at its last chapter which ironically put the country back into where it was at the beginning.

After it was suddenly initiated in Tunisia during late 2010, the Arab Spring was quickly spread around other Arab/North African countries during a short time, and Egypt was no exception. In January 2011, the massive protest against the military regime of President Hosni Mubarak shook the whole country, and Mubarak and his government found themselves facing a situation beyond their control as they clumsily tried to quell this movement. As many of you saw through TV or Internet, lots of Egyptian people gathered at the Tahrir Square in the downtown area of Cairo, and their collective voice demanding democracy got bigger and louder as the Mubarak regime was being pushed into its inevitable end.

The director Jehane Noujaim and her crew began to shoot the scenes for their documentary around the beginning of the revolution, and their cameras vividly captured the turbulent mood surrounding Egypt and its people during that time as hanging around the square and other areas in Cairo. The excitement among different people united together for their common goal is always around the demonstration scenes, and we also observe the crucial role of online social media in the revolution through many cellular phones or digital video cameras in the crowd.

We get to know more about some of more active participants in different positions. One of them is Ahmed Hassan, and he is a likable young man who openly expresses his opinions and thoughts in front of the camera while exuding irrepressible optimism through his smiling face you cannot possibly slap under any circumstance. Like many young people in Egypt, he believes they finally get the chance to bring changes to their country, but he comes to realize later that the changes he and others have yearned for cannot be easily obtained. Everyone including him at the Tahrir Square was joyous to see Mubarak finally stepping down not long after the Egyptian military chose to side with them, but the sense of victory is quickly gone as nothing seems to be changed in their world – and they are still under the same military regime as before.

As a consequence, more protests were followed by more arrests and more brutality during the middle of 2011, and we get a terrible moment showing one military vehicle ruthlessly running over several demonstrators on the street. We see disappointment and frustration growing in Hassan’s face, but he keeps trying hard with admirable persistence. Even after he was seriously injured during one violent incident, he continues his political activity as usual, and he has lost none of his spirit even in the end.

In case of Magdy Ashour, a sensible member of the Muslim Brotherhood who once experienced many hard times under the Mubarak regime, he finds himself in a difficult position when the Muslim Brotherhood, which was one of the major forces in the revolution, begins to use the revolution for its political gain not long after Mubarak was deposed. The Muslim Brotherhood quickly took over the parliament in early 2012 because there was no solid opposing party to compete with it during the election, and then its presidential candidate Mohammed Morsi was soon elected as the new president of Egypt in June 2012. 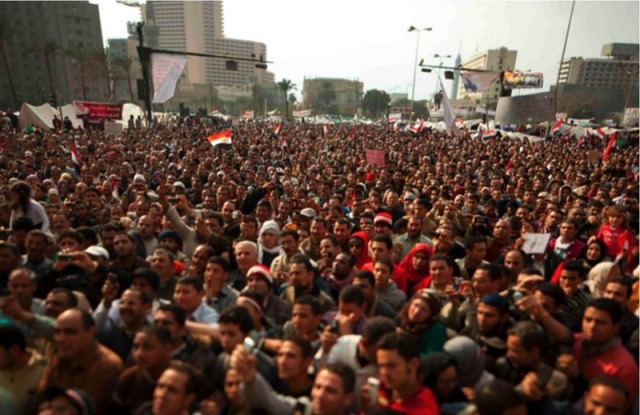 Ashuor supports Morsi because he sincerely believes Morsi deserves a chance, but, as going through several conflicts touching his strong moral sense of right and wrong, this decent man gets a fair share of disappointment like Hassan, who remains close to him despite lots of their disagreements due to their different views. Both are frustrated to see Morsi attempting to be the next ruler(or Pharaoh, shall we say) of the country through a new constitution which literally guarantees absolute power for him and his party, and that is certainly not welcomed by many Egyptian people who have been hoping for real democracy.

Khalid Abdalla, a British/Egyptian actor and activist who worked voluntarily as a correspondent reporting on the revolution while supporting it with others from the beginning, also feels the same frustration as watching the future of Egypt becoming a lot less hopeful than he and others imagined during that monumental moment at the Tahrir Square. After the documentary was shown in the Sundance Film Festival early in last year and won the Audience Award for World Cinema Documentary, Jehane Noujaim went back to Egypt, and they came back with more story and the new ending which has a darkly amusing irony. Most Egyptian people said no to Morsi and the Muslim Brotherhood as they did to Mubarak, so they welcomed a coup d’état by the Egyptian military, which ousted Morsi in June 2013 and then put the country under the same military rule which its people fought against two years ago.

It could have been better if it had provided us some helpful background information for understanding the whole picture, but “The Square” is a compelling work pulsating with considerable verisimilitude to draw us into the human dimensions inside its subject. Regardless of whatever will happen next in Egypt, they did see and experience what they are capable of, and the documentary leaves some glimmer of hope in the end. History may repeat itself, but, as you know, it is not easy to turn the clock back once people open their eyes.

This entry was posted in Movies and tagged Documentary, Revolution. Bookmark the permalink.