“Ernest & Célestine” is a simple tale of unlikely friendship told in a lovely animation style. While its story is a familiar fable equipped with nice little lessons for young kids, this sweet animation feature film is decorated with wits and charms to delight us, and it also has a lovable mismatched pair to be fondly remembered at the end of its story.

The story is set around the two societies separated from each other within one city. The one is the world above the ground inhabited by bears, and the other one is the world below the ground inhabited by mice, and bears and mice have been staying away from each other as much as possible while building each own society in their respective worlds. I wonder whether there is also a cat’s town or a dog’s town outside the city, but I guess you should not ask a lot about setting in case of children’s fable.

Anyway, mice are taught that bears are dangerous creatures while bears are told that mice are animals to be exterminated – or eaten. When a little orphan mouse girl is drawing her picture of a bear and a mouse, her orphanage friends point out that mouse and bear cannot be together, and then their old guardian lady terrifies her and other mouse kids with a good old scary story of “The Big Bad Bear”, who will stop at nothing to satiate its big hunger and will gladly swallow them alive.

But our plucky mouse girl Célestine(voiced by Pauline Brunner) has different thoughts even though she is scared along with other mouse kids. She is imaginative and curious with exceptional artist talent, and that aspect of hers naturally makes her stick out among other rodents. When she grows up, she works in a big dental clinic just like other mice, but she never abandons her talent while wondering why she should be scared of bears.

Regardless of her question, the world above her world is hostile to her and other mice like our human world to rats, and Célestine and other workers must go up there for their risky work to be done. Because their teeth are important not only for speaking but also for survival, dental clinic has been the major industry in the rodent society, and the teeth for implant mostly come from the ursine world above. As unseen ‘tooth fairies’, the rodent workers collect bears’ teeth while not being noticed by them, and we get an amusing moment in which one of the collected teeth is promptly used for a client in the clinic as soon as it is received.

On one evening, Célestine happens to be stuck in a trash can after barely escaping from the danger during her failed attempt to retrieve one teeth, and she is found on the next morning by Ernest(Lambert Wilson), a struggling musician bear looking for anything to eat. Célestine certainly looks yummy to this hungry dude, but Célestine, who maintains her no-nonsense attitude even in front of a gaping jaw, persuades him to choose a better option; she tells him that she will help him having something more delicious(and less hazardous), and she keeps her promise by helping him getting into a certain place where he will gladly throw himself into.

It seems like a brief encounter between them at first, but they soon meet again, and then they suddenly find themselves becoming partners-in-crime as they go through a series of danger mixed with slapstick comedy. They are now wanted criminal figures both above and below the ground, and Ernest and Célestine eventually comes to hide in Ernest’s shabby shack in the woods for a while.

Ernest is initially reluctant to let Célestine into his lair, but, as they spend their winter time together, they get closer to each other mainly through their common artistic sensibility. During one of the beautiful scenes in the film, Ernest plays music as Célestine is occupying herself with painting, and then we see many colorful figures moving or appearing around the screen in dynamic patterns which create a warm harmony with the music played on the soundtrack.

Based on Gabrielle Vicent’ children’s book, the film was directed by Stéphane Aubier, Vincent Patar, and Benjamin Renner. In case of Aubier and Patar, they previously gave me lots of fun through their offbeat stop-motion animation film “A Town Called Panic”(2009), and they did a nice job again here in this film although its style and mood are quite different from their previous work. The background and characters may look sketchy to you at the start, but they are drawn with loving details in the ambience of watercolor paintings, and I enjoyed its zany energy bouncing around the screen whenever it gets a chance.

The voice works by its actors are also very good, and Lambert Wilson and Pauline Brunner bring humor and warmth to their lovable characters; Wilson is unexpectedly delightful in many comic scenes, and Brunner is an effective foil to Wilson’s chubby grumpiness(in case of the US version, Forest Whitaker and Mackenzie Foy takes the main roles while several notable American actors including William H. Macy, Lauren Bacall, Nick Offerman, Megan Mullally, Paul Giamatti, Jeffrey Wright are cast as the various supporting characters in the film).

“Ernest and Célestine” was deservedly nominated for Best Animation Feature Film category of the Academy awards in this year, and, at least in my opinion, it is the best one among the nominees for many good reasons. I must point out that the story gets a little too heavy-handed during its third act to emphasize its themes, but this animation film does not lose any of its charm despite that, while feeling like a fresh air in the era of many passable digital animation films. It’s mainly for children as intended, but, like any other good animation films, this is also the one which can be easily enjoyed and admired by adult audiences. 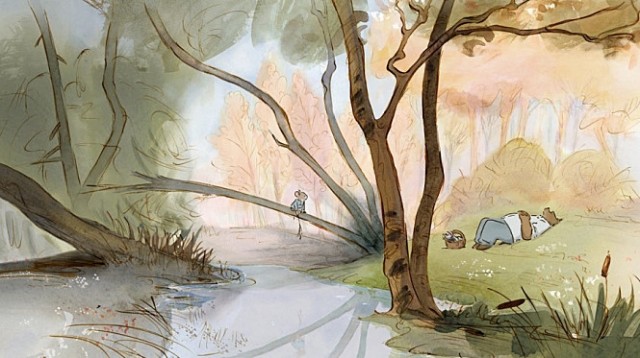 This entry was posted in Movies and tagged Animation, Friendship, Musician, Orphan. Bookmark the permalink.