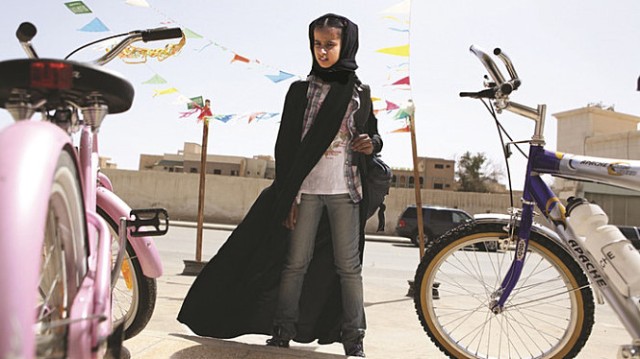 “Wadjda” is a small but remarkable movie for many reasons. While its director managed to shoot the entire film in the country not very supportive of movie industry, this is the first feature length film directed by a female director in the country, and the movie itself is more than enough to be selected as Saudi Arabia’s first official submission to the Best Foreign Language Film category of the Academy awards in last year.

Reminiscent of several unadulterated Iranian films such as “Children of Heaven”(1997), the movie tells a simple story through the view of its young heroine Wadjda(Waad Mohammed), a school girl who has been growing her free, lively spirit under the strict rules of her society and sometimes clashes with the adults surrounding her thanks to her pluckiness. Her mother(Reem Abdullah) does not prevent Wadjda from enjoying her little freedom and privacy in her room, but she is not so pleased about her daughter’s transgressive activities including listening to some ‘infernal songs’ from the Western world. The principal of her girls’ school, Miss Hussa(Ahd), also sees the potential of troubles inside Wadjda. She sternly handle her students as required for her position as the head of the school, but she is not a mean, heartless woman; like Wadjda’s mother, she just disapproves of Wadjda’s improper deeds even though she understands her troublesome student more than she admits.

Wadjda is also well aware of the social restrictions surrounding her, and the sense of isolation and exclusion is always around her and other female characters throughout the film. We do not see any men in Wadjda’s school because they are not allowed by law, and there is an amusing moment when Wadjda is paid to be a messenger going between a girl and her secret lover. While Wadjda’s home is nearly isolated from the outside, Wadjda’s mother can go outside for her work, but she needs a driver just because women are not permitted to drive in Saudi Arabia. 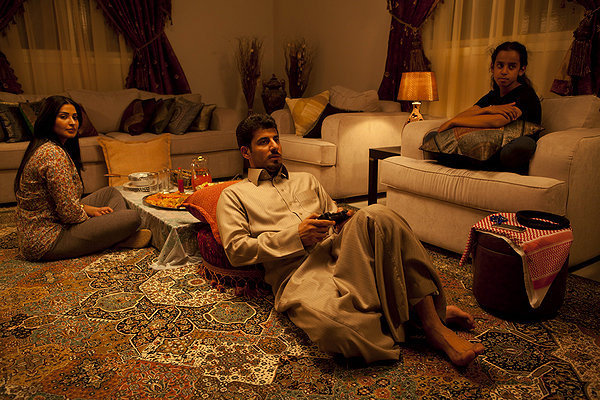 The movie does not criticize the social aspects reflected in the story, but it is surely an odd experience for the audiences outside Saudi Arabia to observe the world where sexual inequality is taken for granted by law and religion. Wadjda’s father(Sultan Al Assaf) looks like a nice man, but he is becoming a distant figure to not only Wadjda but also to a woman whom he once loved. We seldom see him at their home, and he sometimes looks like the guest of the house although he is technically the master of the house. Like many married man in male-dominant society, he wants a son, but Wadjda’s mother does not want to get pregnant again for her health reason, and she knows too well that her husband is probably considering having the second wife just because of that.

Meanwhile, Wadjda sets herself upon a personal mission to be accomplished. She wants a bicycle for having a race with a boy who has been friendly with her, and she finds the right one for her at a nearby shop, but there are a couple of obstacles she has to deal with. While she has to learn how to ride it, she is blocked by her mother’s objection, for riding bicycle is deemed as a taboo to women(believe or not, as mentioned in the film, they think riding bicycle seriously affects woman’s fertility).

Still determined to buy that bike, Wadjda begins to save money by any means available to her. She initially tries to get the money through her usual transactions of banned items at her school, but she only finds herself soon brought to Miss Hussa for that, and her mother is naturally angry to hear about her daughter’s naughty dealings at the school.

And then, Wadjda comes across a very good opportunity she cannot possibly refuse. She is not much interest in religion, but, when she learns that the prize of the upcoming Koran recital competition at the school is the cash enough for buying her bicycle, she immediately goes for it without any hesitation. She joins in the Koran reading class, and she also buys an interactive video game for her Koran study at home, and she turns out to be a good learner.

I do not dare to tell you anything about the outcome of her diligent efforts, but I can say that the director/writer Haifaa Al Mansour will give you powerful moments to linger on your mind even if you are not very surprised by what happens in the end. For her realistic approach to the story, Al Mansour insisted on shooting her film at Riyadh despite the restrictions to be put on her direction(she was not allowed to interact with her mostly male crew in public, for example), and how she managed to complete her debut work in spite of many difficulties resonates with her heroine’s strong-willed determination. Like Wadjda finds a way to deal with her oppressing system to get what she wants, Al Mansour found a way to fulfill her small but significant vision which is vividly packed with realistic details including female students’ quite careful handling of the Koran or a young student rejecting her mother who also happens to be a senior student of the same school(this is the world where an 8-year-old kid can get married to older guy, you know). As a matter of fact, you may be surprised to know that she directed all of the street scenes in the film from the distance while staying inside a van parked nearby(she interacted with her crew mainly through a monitor and a walkie-talkie).

The actors in the film, most of whom are non-professional ones, give natural performances as ordinary people you may encounter on the streets of Riyadh, and young actress Waad Mohammed gives an engaging lead performance as a resourceful girl who may advance as much as Al Mansour herself did in her life. As implied in the tentatively hopeful scene in the end, there will probably be more difficulties to come in Wadjda’s life, but this smart girl won’t step back easily – and we come to hope for a better future for her.

This entry was posted in Movies and tagged School. Bookmark the permalink.