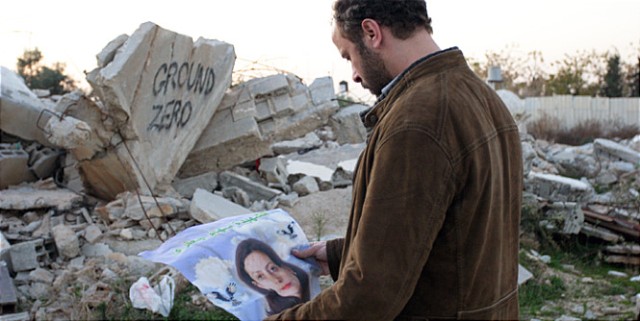 With its thought-provoking subject, “The Attack” hits its hero hard while giving no easy answer to his devastated personal circumstance or the political situation surrounding him and his world. After his life is suddenly turned upside down by a woman he has loved and trusted, he desperately wants to know why she did it, but he only comes to realize how much he did not know about her – and his ambiguous position within a political conflict still being continued even at this point.

He is Dr. Amin Jaafari(Ali Suliman), a successful Palestinian doctor who has been enjoying his rising career at a hospital in Tel Aviv, Israel. Around the beginning, we see him receiving some prestigious award at the ceremony attended by many of his Israeli colleagues, and he is happy to give his acceptance speech for showing his gratitude and emphasizing the possibility of more opened relationship between Israel and Palestine in the future.

But then, he is tumbled into a nightmarish situation beyond his imagination. On the next day, he and others at the hospital hear the sound of a bomb explosion from somewhere, and the ambulances soon arrive with the wounded in the urgent need of treatment. Not long after he returns to his home after this difficult day, he is called to the hospital again, and the police show him the heavily damaged body of his dear wife Siham(Reymond Amsalem), who was supposed to be outside the city as far as he knows. To make the matters worse, there are strong evidences suggesting that she was the suicide bomber who committed that horrible terror, and the detectives are naturally suspicious of him.

The movie calmly observes Jaafari’s agonizing plight while never losing its focus on the atrocious aspects of suicide bombing. While it is pretty senseless for anyone to blow himself up, it is also pretty terrible to hurt and kill innocent people just for some political or ideological reasons, and the movie chillingly emphasizes that point through the sights of wounded people and a brief flashback scene showing a group of children who were unfortunately at the site right before the explosion.

While helplessly watching his exemplary life being crumbled by this bombing incident, Jaafari goes through a difficult time to process his wife’s hidden side he never knew before. At first, he stubbornly refuses to believe that Siham is a terrorist, but it eventually becomes inarguable that she did commit that heinous terror, and now he agonizes over how she was driven to such a radical act like that. As pointed out at one point in the film, most female Palestine suicide bombers, who usually get more publicity than their male counterpart, are pushed by their hopeless social status, but Siham does not fit into that profile as an educated middle-class woman who is also a secular non-Muslim, and that certainly baffles her husband as well as the detectives who treat him rather roughly during their initial investigation.

The movie shifts itself onto a thriller mode after Jaafari decides to get the answer for himself, and we come to see the complex aspects inside the Palestinian-Israeli conflict through Jaafari’s view as he searches for the answer in his hometown in the Palestinian territory, where she went right before her bombing. While his relatives are glad to see him again after a long time, they know almost nothing about her motive although she did meet some of them, and Jaafari finds himself being regarded as an unwelcomed stranger mainly because it is quite possible that he is being followed by the Israeli police.

While there are several tense moments of pursuits and following encounters during its second half, the movie remains as a character drama about personal grief, anger, and sorrow in the aftermath of an awful tragedy, and it goes deeper into the personal level with its angry confused hero. As his mind is frequently haunted by his memories with Siham, Jafaari realizes how much he overlooked her while occupied with his career, and his last memory with Siham generates more regrets on him. He casually ignored her call at that time because he was about to receive the award, and he comes to wonder whether it was her last desperate attempt to hold onto him before going over the point of no return. 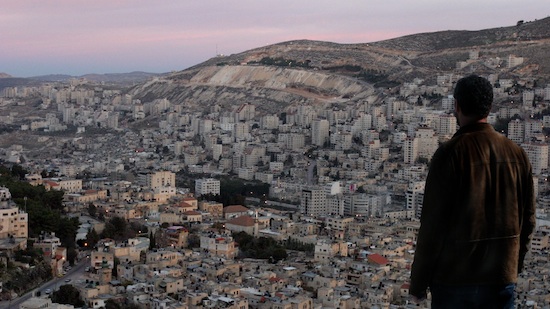 Based on the novel by Yasmina Khadra, the director Ziad Doueiri, who adapted the novel with Joelle Touma, keeps the movie on a well-balanced position as observing the both sides of the conflict without any favor or judgment. While Jaafari’s close Israeli friends including Kim(Evgenia Dodena) are sympathetic to his difficult circumstance, Kim eventually asks him which side he is on – but she has a good point on Siham’s innocent victims who do deserve justice. While the movie seems to be disgusted as much as Jaafari by Siham being praised as a martyr in Palestine, it does not overlook many current injustices inflicted on its people, which were probably the main reason why she was secretly turned into a terrorist.

The movie is an engaging story on the whole, but it is not without notable flaws. Some of the characters are rather thin compared to the complexity surrounding them, and it is virtually written on the screen that a certain minor character will be important in the later plot development, right from when he appears on the screen. It is rather unconvincing to me that it takes that long for Jaafari to connect the dots given to him, but I must also point out that his next encounter with that character in question generates one of the most emotional moments in the film.

Like many good films about the Palestinian-Israeli conflict, “The Attack” is a smart, thoughtful film which lets us think over its hot issues through its powerful drama. Ali Suliman, who previously appeared in Oscar-nominated film “Paradise Now”(2005), is solid as a grieving man trying to grasp for the answer beyond his reach, and Reymond Amsalem hovers over the story even though she mostly appears in the flashback scenes. As poignantly shown during the final scene, Jaafari’s love toward his wife remains same as before, but she looks different to him now – and so does his world where he once thought he could live with her without any serious problem.

This entry was posted in Movies and tagged Doctor, Husband and Wife, Terrorism. Bookmark the permalink.