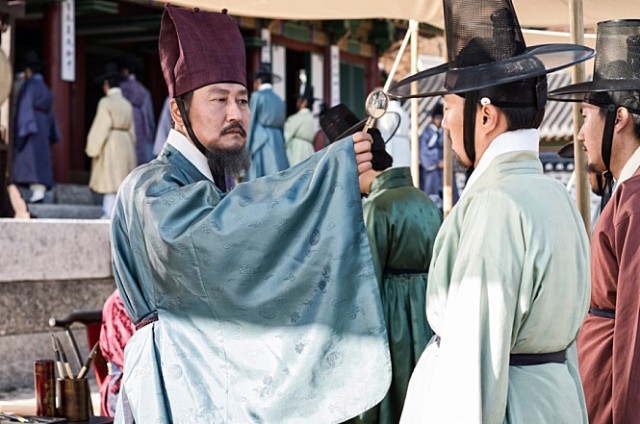 I do not have much interest or belief in phrenology, but, though it was a brief moment, I enjoyed watching how the phrenologist hero of South Korean period drama movie “The Face Reader” works during its first half. With his expert phrenological knowledge, he can discern lots of things from you including personality type once he observes your face. At one point, he is asked to help the law authorities solve one murder case, and, though there is not any solid physical evidence, he quickly spots the culprit as soon as he sees the face of the guy in question, and that guy is indeed the murderer.

Using his phrenological knowledge, he also works as an expert prognosticator who can tell you a lot about your fate if not all about it, and that is how he suddenly finds himself at the center of a dangerous historical event. Many people are going to die just because they happen to be on the side to be eliminated, and, though he already guesses what will ultimately happen, it becomes clearer to him that there is not much he can do as he bitterly comes to recognize his helpless position in front of the big historical tide.

He is Kim Nae-kyeong(Song Kang-ho), the elder son of the disgraced noble family during the Joseon Dynasty in the 15th Century. While living in seclusion with his younger brother Paeng-heon(Cho Jeong-seok) and his young son Jin-hyeong(Lee Jong-seok), he has been known as the most skillful phrenologist, or ‘face reader’, in the kingdom, and, on one day, he is visited by Yeon-hong(Kim Hye-soo), a wily, charming courtesan and fellow face reader running a very popular gisaeng’s house in Hanyang(it is an old name of Seoul). He is initially reluctant when she offers a job of face-reading her wealthy clients in Hanyang, but he eventually accepts her offer, so he and his brother go to Yeon-hong’s place a few days later. 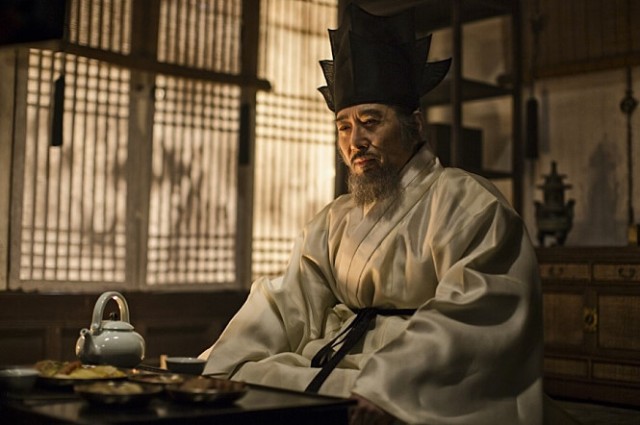 Although he unwittingly gets himself trapped in an unfair partnership contract due to Yeon-hong’s sneaky tactic not long after they arrive in Hanyang, Nae-kyeong does his job well as demanded, and reputation and money accordingly  follow. After solving the murder case mentioned above, he is called by the vice premier Kim Jong-seo(Baek Yoon-sik), and then he is brought to the palace for being received in audience by King Monjong(Kim Tae-woo), who urgently needs Nae-kyeong’s phrenological skill to find out any possibility of coup d’état from several powerful figures. King Monjong knows he has a few days to live due to his weakening health, and he naturally worries about the safety of his young son who will succeed him as the new king after his death.

We see that the king has a very good reason for his deepening concern. His ambitious brother Grand Prince Sooyang(Lee Jeong-jae) is growing his power and influence day by day, and he may usurp the throne from his young nephew after the king dies. Nae-kyeong is ordered to check the faces of the possible traitors including Grand Prince Sooyang, and this important job turns out to be not as easy as expected while he gradually realizes the danger accumulating around him and his family.

Probably because most of South Korean audiences including me know well about what will happen in the end(the historical incident depicted in the movie is one of the most infamous ones in the Korean history), the movie does not hurry itself to reach to its inevitable climax. It steadily builds its momentum as it moves from the broad comedy during its first half to the serious melodrama during its second half, and it seldom feels dragged despite its long running time(140-min) and pre-determined ending. Kim Dong-hyeok’s screenplay is solid in many aspects; I was confounded at first by its seemingly inconsequential prologue and a certain insidious supporting character wearing mask, but I came to appreciate how his screenplay utilized them for good dramatic effects later.

The story and characters are supported well by its talented cast which can grip our attention for more than 2 hours. Song Kang-ho, an engaging South Korean actor who has recently been lukewarm in several South Korean films, is back in his element lately with Bong Joon-ho’s terrific SF film “Snowpiercer”(2013), and he proves here again that he is still one of the most interesting South Korean actors. Even with his shabby appearance in the beginning, Song immediately wins our favor to become a likable ordinary hero we can identify with, and his good performance becomes a major asset of the movie as he effortlessly goes back and forth between humor and pathos along with the story.

The supporting performers around him are also entertaining to watch. Cho Jeong-seok, who stole the show in “Architecture 101”(2012), has a nice comic chemistry with Song as Nae-kyeong’s thoughtless brother, and Lee Jong-seok, who played Nae-kyeong’s good-willed son determined to restore his family’s reputation in a way more respectable from his father’s, is better than expected despite his short acting career. While Kim Hyeo-soo has her own small moments as a sole substantial female character in the movie, Baek Yoon-sik gives commanding dignity and gravitas to the man who was nicknamed “The Tiger of Baekdu Mountain” during his military campaign years, and Lee Jeong-jae is competent as the ruthless villain of the story although it came to my mind that his real-life counterpart was a lot more complex than the thuggish portrayal in the movie. Sure, he did kill lots of people to sit on the throne, but so did his grandfather and his great-grandfather, and he actually had the right stuff to become a good king compared to his young weak-willed nephew(Full disclosure for non-South Korean audiences: he has been regarded as one of the better kings of the Joseon Dynasty while still notorious for his ruthless ascent to absolute power).

While it is not entirely free from its flaws including its misplaced/overused score(I must confess that I felt an urge to shout “turn off the soundtrack, please!” several times during the screening at last night), “The Face Reader” is a smart enjoyable movie which successfully mixes comedy and drama to lead us to its tragic ending filled with the sense of bitter resignation. Sometimes, like Nae-kyeong, we have no choice but to be swept along with others as meek individuals even if we can clearly see beforehand what is going on around us – and, as you know, the history has proved that many times.

This entry was posted in Movies and tagged Father and son, Real-life incident, South Korean Film. Bookmark the permalink.