“The Lone Ranger” has several moments of unadulterated fun although it is messy and uneven on the whole. It is not as bad as some reviewers said, and it is certainly nice to hear William Tell Overture being pumped up on the soundtrack during its spectacular climax sequence, but, as the story schizophrenically swings between seriousness and zaniness, the movie loses its balance amid too many things stuffed into its thin plot. As a matter of fact, the movie is packed too much, and, as getting a little bored due to its uneven pace, I even made a list in my mind for checking those familiar genre elements during my viewing on this Thursday night: desert, plain, rock mountain, mine, Monument Valley, outlaws, rangers, Indians, US Army, drunks, prostitutes, Christians with bible, Chinese workers, train, train station, railroad company, bordello, scorpions, rabbits… and horse dung.

It is not so surprising that the movie also reminds us of many western films, and its opening sequence is clearly influenced by “Little Big Man”(1970). At a country fair in San Francisco, 1933, a young boy wearing Lone Ranger costume enters a quiet, unpopular Wild West exhibition, and he encounters a very old Indian man named Tonto, who tells him the story about how he met a man who would be known as the Lone Ranger during the Wild West era. Even with the heavy make-up making him barely recognizable, Johnny Depp gives another typical offbeat performance, and I and others had no difficulty in recognizing him as watching his character’s odd mannerisms including trying to feed a dead bird he always wears on his head(I dearly hope it no longer smells).

Before Tonto’s ‘great warrior’ became a righteous vigilante wearing mask at the end of their first adventure in 1869, he was a young idealistic lawyer named John Reid(Armie Hammer). When he is returning to his old hometown in Texas to visit his Ranger brother Dan(James Badge Dale, who has recently been quite ubiquitous in these days) and Dan’s wife Rebecca(Ruth Wilson), he has no idea that he is on the same train with a notorious outlaw Butch Cavendish(gleefully nasty William Fichtner), who is being escorted to the town in a separate compartment. With the assistance from his henchmen ready for his arrival, Cavendish quickly escapes right before the train arrives at the town, and that is how Reid meets Tonto, who had been shackled along with Cavendish.

After his brother and others are later killed by Cavendish and his gangs during the search outside the town, Reid, luckily rescued and then nursed by Tonto, is determined to bring Cavendish to the justice. Tonto goes along with him because he sees the signs telling that he should help Reid realize his destiny as a ‘great warrior’ – and he also has his own personal reason to track down Cavendish, which is later revealed through a long flashback scene.

Following their journey, the movie constantly changes its gear among many various modes with a certain degree of wackiness. Sometimes it becomes a ruthless modern western(but its depiction of violence stays in PG-13 area), sometimes it is turned into a quirky comedy between a mismatched duo, and sometimes it bulks itself up into an exciting adventure movie. Various characters are naturally thrown into this busy mix, and some of them are pretty colorful. Reid and Tonto meet a spunky bordello madam in private later in the story, and Helena Bonham Carter has a little fun with her character and her deadly ivory right leg. Some of Cavendish’s dim henchmen are nice comic contrast to Cavendish’s savage acts such as taking out a heart out of his dying victim and then eating it, and Tom Wilkinson brings a little humor to his thankless role as his character’s scheme associated with not only Cavendish but also his railroad company is revealed.

These elements could have worked well together, but they mostly clashed with each other in discord. While it tries to be an innocent fun as its inspiration had been, the movie also tries to be a sort of serious revisionist western through putting more dramatic emphasis on Tonto than Reid, who mainly functions as a straight guy to his bizarre partner. The result is frequently incoherent; one action sequence starts with lightweight comic action, but then it is suddenly hurled into a grim massacre reflecting the cruelty behind the America history. It could have worked if the movie had been more serious, but, in the story featuring silly laughs including an alcoholic horse(he is later named Silver, by the way) and not-so-cute desert rabbits, most of its serious moments feel awkward. 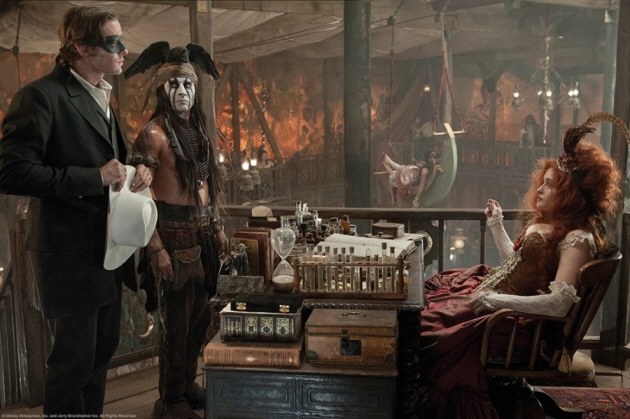 At least, the director Gore Verbinski, who previously made “Pirates of the Caribbean: the Curse of the Black Pearl ”(2003) and its two big sequels and a wonderful western animation “Rango”(2011), keeps his disjointed movie rolling and bouncing. Like many good western films, the movie admires the vast views of its barren landscapes through its camera during many scenes, and its frantic action scenes evoke the fun and joy we got from Indiana Jones films. Yes, they are pretty unrealistic CGI action scenes where no one gets hurt seriously no matter what happens, but they are handled with brash style and exuberant energy, and I did welcome its loony train action sequence which involves two trains rapidly running in parallel.

As an odd couple of the story, Johnny Depp and Armie Hammer are adequate in their contrasting appearances. I personally think Depp should play a little more normal character now after having played so many off-the-wall characters, but he is one of rare actors who are effortless in playing such characters, and he becomes the mask for his character rather than hiding behind the outrageous appearance. Hammer nicely complements Depp’s showy quirkiness with his straight deadpan performance; he is bland at times, but he and Depp have a good comic timing between them, and his performance becomes more enjoyable once his character goes all the way for saving the day.

I am not very familiar with “The Lone Ranger”, and I must say William Tell Overture is still associated with that hilarious sex scene from “A Clockwork Orange”(1971) in my mind, but I had a fairly good time with the movie itself even though I recognized its flaws. The movie could have been shorter and tighter, and, though its budget was not totally wasted, it was really a misguided decision to bloat it into a $250 million blockbuster without considering its relatively limited appeal compared to other blockbuster films. Considering how fabulous “Rango” was, maybe the movie could have worked better as an animation feature film.

At this point, it seems the movie will be one of the biggest box office disasters of this year, and many already compared its imminent failure to that of “John Carter”(2012), another bloated old-fashioned misfire I did not recommend but was willing to defend for many reasons. I cannot recommend this overblown oddball western despite its good things, but, sometimes, a big misfire is more interesting to watch than bland blockbuster films.