While I encountered the news about the recent Conclave held in Vatican, my mind automatically went back to “We Have a Pope”, a warm, amusing comedy directed by Nanni Moretti. Because it will be soon released in South Korea in early May, I recently revisited it again for this review, and I came to like it a little more than before as noticing its several flaws again. There are some dissatisfying parts, but the movie has warm comic moments to be enjoyed, and it is immensely helped by the wonderful performance by Michel Piccoli, a French actor who is currently 87 and still active at present.

In the movie, Piccoli plays one of the Conclave members who gather together in Vatican shortly after the death of the Pope. As they follow the rituals before the Conclave, the attention of people and media is focused on them with the increasing curiosity on who will be the next pontiff. Several strong candidates are mentioned on TV, and the faithful in St. Peter’s square are eagerly and patiently waiting for the white smoke which will come out of the chimney on the top of St. Peter’s Basilica once the pope is finally elected.

The Conclave members, who are the cardinals coming from different places all over the world, enter the hall completely secluded from the outside. As each of them secretly decides and writes down a name on the ballot, there is the tension palpably felt among them in silence, but it is not the one you usually expect during election. We closely see their firm, tense faces one by one, and then we listen to each of their nervous minds, which all wish for the same thing: “Not me, oh, Lord! Don’t choose me! I am not worthy!” Being the spiritual/public leader of 1.2 billion Catholics is certainly not an enviable job, and now I wonder whether Pope Francis had a similar wish during the Conclave.

After several rounds of voting, one of them is eventually elected. Cardinal Melville(Michel Piccoli), who was a dark horse candidate during the process, dutifully accepts the result as congratulated by his relieved fellow cardinals, and everything is soon ready for his first public appearance as the new Pope at the front balcony of St. Peter’s Basilica. That famous Latin phrase “Habemus Papam”(It means “We have a Pope”) is spoken as the announcement of his new position, and all he has to do now is appearing in front of the cheering faithful in the square.

However, stressed by his new position and immense duty, he suddenly gets a nervous breakdown. He screams and then bolts out of the place before appearing at the balcony. Surprised and confounded by this unexpected incident, the spokesman of Vatican and the cardinals try to get the situation under control as soon as possible. They check his physical condition, but he seems to be all right. They even bring in a respected psychiatrist(played by Moretti), but the doctor cannot help his latest patient much because of many limits inside Vatican. When he tries to have the first session with the Pope, they are surrounded by the cardinals intent on the questions and answers exchanged between them.

The circumstance becomes more complicated when the Pope manages to disappear after he has a more private session outside Vatican. Everyone in Vatican becomes panic while desperately hiding that fact from the media, and the psychiatrist and the cardinals find themselves stuck in the building, but the Pope himself feels pretty fine as he walks around the streets of Rome as an ordinary man. Because the result of the election is not officially announced, nobody pays attention to him, so he freely wanders around the city and then rediscovers his private enthusiasm through the chance encounter with a theater troupe.

A barbed black comedy could have been made with this funny premise, but the movie instead observes its characters and their human foibles with gentle attitude, and the small moments of amusement are generated from their humanity as a result. While hanging around with the cardinals for a while, the psychiatrist comes to have the conversations with them on several subjects including card game and medications, and he eventually holds a volleyball tournament for them as a means of spending time. It does not continue as long as he hopes, but old cardinals have some fun and excitement while forgetting their emergency during that brief free time.

And Piccoli’s performance holds the story as its heart and soul. Since I saw him for the first time through Alfred Hitchcock’s “Topaz”(1969) in 1996, I have encountered Piccoli in many other movies including Luis Buñuel’s “Belle de Jour”(1967) and Louis Malle’s “Atlantic City”(1980), and it is terrific to see this aging respected actor giving one of his finest performances here in this film. As a confused man struggling with the unwanted duty imposed on him, Piccoli brings humanity and dignity to his character, and there is a poignant moment when his character tries to answer to a question about his occupation during one of his sessions.

When I watched the movie for the first time in late 2011, I was a bit disappointed by the ending and gave it 2.5 stars because of that. The ending could have been a more effective punch line for its comic plot, and I must say I am still not so satisfied with it even after the third viewing because it does not feel that shattering despite what is shown on the screen.

Nevertheless, Piccoli’s performance remains as something worthwhile to watch, and the good moments in the film grow on me while entertaining me with their good-natured humor and gentle warmth, and I guess my initial judgment was caused by my wrong expectation(I sort of expected the Vatican version of “Analyze This”(1999) before watching it, to be frank with you). It is not bitingly funny at all, but that is not what this mild comedy intends to be, and it does most of its jobs well. 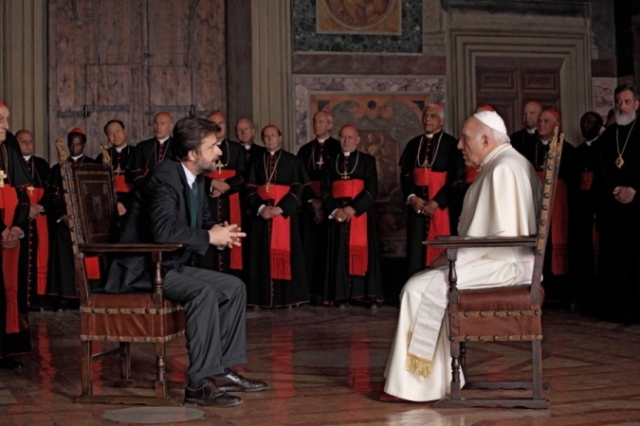