Loosely based on a shocking real-life incident, Romanian film “Beyond the Hills” presents us a slow but compelling drama about two young women entangled in a simple but difficult circumstance caused by two conflicting values. While not taking sides with any of its characters in its objective and unobtrusive view except a few moments in its long running time, the movie calmly observes how they come to be cornered by misguided religious belief and other factors step by step, and we cannot help but be maddened about how their circumstance is developed into a devastating outcome by themselves and, above all, others surrounding and influencing them.

The story begins with Alina(Cristina Flutur) returning to her hometown in Romania from Germany, where she has worked for several years. The main purpose of her return is meeting Voichita(Cosmina Stratan), who has been her best friend since they grew up together in their orphanage. As soon as Alina sees Voichita at the train station, she immediately hugs her friend quite tightly, and the movie indirectly implies that they are probably a lot more than BFFs.

Alina wants to go back to Germany with Voichita for their life together, but she finds that Voichita cannot be persuaded easily because Voichita has been in an Orthodox covent for years as being under the heavy influence from her priest(Valeriu Andriuta) and Mother Superior(Dana Tapalaga), who have been literally daddy and mommy to her. Now becoming a nun devoted to the love of God, Voichita does not want to leave her convent even though she dearly loves her friend as before. Alina is determined to persuade her during her temporary stay in the convent, but it is not that easy under the stern rules of this small community unwelcoming to infidels. During their dinnertime, the Priest frankly talks about his opinions on the modern world outside, and Alina clearly sees whom his words aim at.

The time passes along with the daily routine at the convent as Alina is frustrated about no particular advance in persuading her friend to change her mind. Although the convent is located in a remote place outside the town and it does not even have electricity(but they have a charged cellular phone for emergency), Voichita and others sometimes go outside with their maintenance man’s old car for getting groceries or visiting the orphanage where Alina and Voichita grew up. We also see Alicia’s older brother, who seems to be mentally retarded and later gets a job at the convent.

And then, suddenly, Alicia begins to show disturbing behaviors for some reasons. The Priest and the nuns do what any sensible people will do in such a circumstance; they take her to the hospital, and she spends several days of medication and observation at the hospital. She seems to be recovered, and she is sent to the convent for further recovery, but she becomes more erratic, disturbed, and violent. Alicia becomes distressed because she worries about her friend’s worsening condition and that threatens her position in the convent. Disturbed not only by Alica but also by the ‘signs’ they see, the Priest and nuns come to believe that Alica is possessed – so they decide do something about her illness.

The director/the writer Cristian Mungiu’s previous work was “4 Months, 3 Weeks and 2 Days”(2007), one of the best films I saw in 2008, and its transparent but engrossing approach is also applied well here in this film. While his camera steadily follows the characters in many long takes like an unseen observer, Mungiu effectively establishes and builds emotions and tensions on the screen as he subtly unfolds his story in the characters’ claustrophobic environment, and the movie feels rarely tedious although it becomes repetitious at times in the middle of the story.

The movie holds its opinions behind its back throughout the story in its detached observation, but it is apparent to us that Alina is an unfortunate victim of absurd superstitions and old-fashioned religious belief, although she is not entirely clean in her situation. While we can be sympathetic to her desperate attempt to retrieve only friend she can depend on, she becomes more distant to us as becoming a more problematic presence to the people at the convent(at her most zealous moments, she reminded me of the disturbed heroine of “The Story of Adele H”(1975)). The Priest, who is not an unmerciful tyrant in spite of his stubborn narrow-minded religious view, actually tries to deal with her mental illness nicely at first, but, when they think they cannot get any other help from outside(the hospital cannot afford her and neither can her adapted family), he and others eventually turn to a brutal exorcism ritual which can be regarded as a medieval form of shock therapy.

The movie wisely avoids being sensational or exploitative through its phlegmatic tone and restrained realistic depiction during their exorcism scenes, which consist of tying Alina on the ‘cross’ and reading the bible to her continuously for days. They commit such a cruelty like that out of their firm belief that they are doing a right thing for her, and that makes these moments more horrifying. The performances are entirely believable and natural, and the lead actresses Cosmina Stratan and Cristina Flutur deservedly received the Best Actress award for their convincing duo performance at the Cannes Film Festival early in this year(The movie also received Best Screenplay award for Mungiu).

“Beyond the Hills”, Romania’s official submission to the Best Foreign Language Film of 2013 Oscar, is inspired by two non-fiction books by Tatiana Niculescu Bran, which were about the real-life case of a young member of a monastery who died after an exorcism ritual in 2005. The movie almost keeps its neutral attitude straight even when it eventually faces the tragic consequence in the finale, but, whatever you think about what happen in the movie and the responsibility associated it, one thing was pretty clear to me during its lingering last scene; even after facing the consequence, they have little idea about what they have done to that poor girl. How pathetic and ignorant they are – and how horrible and oppressing we can be just because of a mere religious belief. 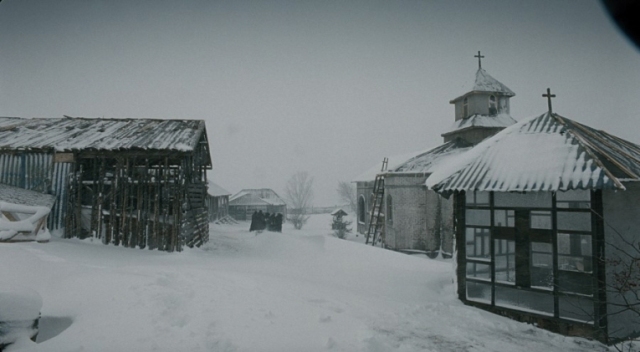