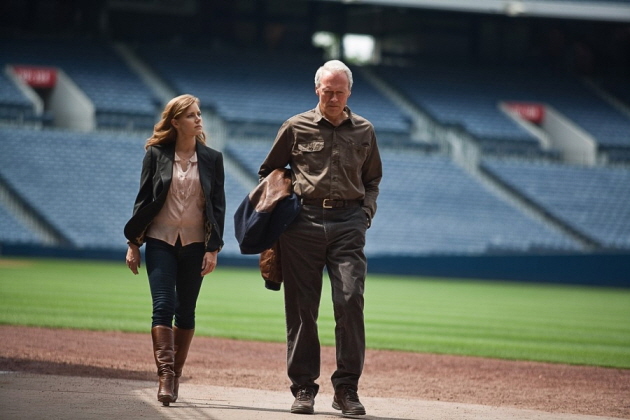 Sometimes actors can find a way to make the story work even when it looks not so special, and I enjoy watching how they make their materials into something watchable instead of something passable. “Trouble with the Curve” is a typical case of a family drama with a touch of “sports drama”, and it goes straight into its story without anything new, but it has good actors to lift its story. I do not think I gave sufficient interest to the story itself, but my eyes were fixed to their good performances, and I willingly followed the story without much boredom.

The movie drew attentions when it was released in US because the movie has a sort of a comeback performance by Clint Eastwood, who announced the retirement from acting with his film “Gran Torino”(2008). That was a terrific film, and Eastwood gave a fine performance which could be interpreted as a fitting finale to his illustrious acting career.

As the aging hero of “Trouble with the Curve”, Eastwood does his usual things in his comfort zone, and we know what kind of a guy Gus is as soon as we see him: a tough old guy stubborn about his way of living. He probably have to consider retirement, and he knows well that there are few years remaining in his long career as a baseball scout, but he keeps moving on like an old trooper who will never stop until his death. He always goes to the baseball games for himself, and his fellow scouts, most of whom are as old as him, welcome his presence in the bench while looking for anyone talented enough for their respective major league baseball teams just like him.

But his body starts not to follow his will well. At first, there were just minor problems, but it turns out that he has problems with his eyes probably due to glaucoma. To a scout like him, that is a serious problem. How can he know that someone is a good player to be recruited when he cannot see at all? This is not a good news especially when the owner of his team begins to depend on a new method of recruiting players through computerized statistics instead of the experiences of professionals like Gus(While watching the film, I could not help but think of “Moneyball”(2011), whose story was about how computerized statistics beat old professional scouts like Gus).

Fortunately, Pete Klein(John Goodman), his friend and direct boss, asks Gus’ estranged daughter Mickey(Amy Adams) to assist him. Although she is reluctant about helping her father mainly due to her busy work in a law-firm where she aspires to become its new partner, but she decides to take a ‘vacation’, and that is how their awkward journey begins.

They move around several baseball playgrounds in North Carolina where they may find good players for Gus’ team. They are distant from each other at the beginning, and there are some unresolved feelings between them, but, as you may have guessed already, they discover that they are still a father and a daughter. While assisting her dad, Mickey also comes across Johnny Flanagan(Justin Timberlaker), a young scout who was once a rising new baseball player scouted by Gus and then quickly retired due to unfortunate injury, and it does not take a lot of time for them to get close to each other.

This is surely a predictable plot, but the director Robert Lorenz, who worked as an assistant director in Eastwood’s directing works, handles his first film with a transparent approach, and the story advances in slow but appropriate pace though it is languorous at times. The movie is produced by Eastwood’s production company, and you will find several familiar technicians in the credit including the cinematographer Tom Stern, the editor Joel Cox, and the production designer James J. Murakami. 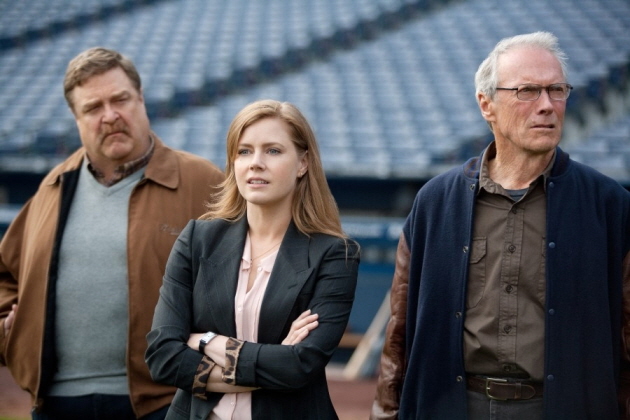 In this familiar production environment, Eastwood effortlessly exudes his wrinkled charisma as an old star actor who still can hold our attention, and he has a nice chemistry with Amy Adams, who is effective as a lively contrast to grizzled Eastwood. Her character’s arch is predictable from the beginning, but Adams is an immensely engaging actress, and she imbues her character with warmness as well as stubbornness. John Goodman provides a small but nice supporting performance, and I appreciate Justin Timberake’s adequate job with his thankless role. His character is not that necessary in the story, but Timberlake is a likable actor, and he and Adams click with each other well even if there is no spark in their scenes.

On the whole, “Trouble with the Curve” is one of those safe products we have no trouble in accepting it. This is a simple and predictable drama where you can immediately know who good guys or bad guys are, and I bet you will instantly recognize at one point that a certain supporting character will definitely appear again for a nice feel-good payoff scene. As a matter of fact, I almost shouted “Trash can!” during one scene when a trash can appeared on the left corner of the scene before a ringing cellular phone was thrown into it.

But it throws its ball straight, and I liked the movie despite its several weaknesses. Although Clint Eastwood unwittingly contributed to a bizarrely ridiculous sight at the Republican National Convention in this late August, he is still an admirable actor/director to many of us, and that is why it is rather glad to be confirmed that he can come out of his ‘retirement’ and can act again if he is asked.

This entry was posted in Movies and tagged Baseball, Drama, Father and daughter, Scout. Bookmark the permalink.