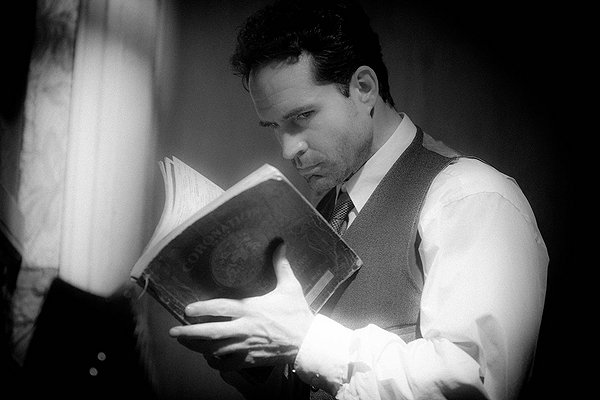 I visited Jeonju International Film Festival(JIFF) again on last Sunday. Though I can watch only one movie at a time, it has always been fun to see the international film festival held in my hometown city, and I have encountered a few good films through this festival during last 4 years. It is sad that I have not been able to attend Ebertfest and enjoy the films with my Far-flung correspondent friends for a while, but JIFF has been a small consolation to me.

In this year, I was particularly glad to know that “Terri”(2011), which was recently received well at 2012 Ebertfest, would be also shown to the audiences at JIFF. However, due to the time constraint in my lab schedule, I could not watch this good film at 2012 JIFF, so I instead watched it and wrote the review three weeks ago. And I decided to watch the other film at the festival which also drew my interest – Guy Maddin’s new movie “Keyhole”(2011).

I woke up early at my campus dormitory at Daejeon on last Sunday morning, and I went to Jeonju by bus in the morning. As soon as the bus arrived at the terminal, I immediately caught a cab, and then quickly arrived at the spot near the theater where the movie was supposed to be shown. Some of the theaters in Jeonju were used to be big, but now most of them are turned into the multiplex theaters. The seats are more comfortable, and they have changed the inner space a lot, but the theater I went into somehow evoked the old memories inside my mind – especially through the smell of the urinary.

Probably because of that, it was interesting to find that “Keyhole” was the film in which the various genre elements were mixed together in one haunted house full of ghosts and the memories associated with them. I have no clear idea about what happened in the past of the characters, but I was fascinated by the fragments of memories hurled to me and the other audiences. It is mostly confounding, but I was constantly interested by its striking style existing somewhere between film noir and silent film. 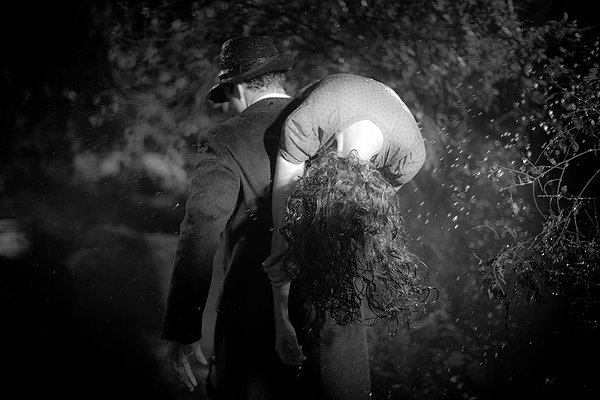 How can I describe its, uh, story? At first, it seems to start with a typical plot from gangster films. Several gangsters and one gun moll are trapped in some house, and it looks like they are surrounded by the police outside. They may get out of the place, but they are supposed to wait for their boss, so they continued to be stuck in the house.

It looks like waiting for their boss instead of Godot, but soon their boss Ulysses Pick(Jason Patrick) appears along with a girl rescued by him. Her name is Denny(Brooke Palsson), and how they came across each other or how they managed to arrive at the house(where are the police, by the way?) is not clear, but Ulysses shows more kindness to Denny than his grudging mistress, who has some funny graffiti drawn on her underwear.

Ulysses does not seem to have any good plan for him and his gangs. The gangs still remain in the house, and he moves around the house with Denny – and a young man who are held as a hostage for some unknown reason. You think this is confusing, and there are more confounding elements to come. While they are in the downstairs, there are Ulysses’ wife Hyacinth(Isabella Rossellini) and her old daddy and her Chinese servant in the upstairs. It seems all of them are in the same house, but the house is some kind of supernatural maze in which Ulysses wander around to reach for his wife.

Now you may get some ideas, especially if you are familiar with Homer’s “The Odyssey”. The director Guy Maddin freely moves around this strange place while giving us the series of weird but humorous sights here and there. One of the funny scenes is in the film is the one where Ulysses orders his gangs to gather all of their firearms in one basket and throws them away to the furnace in the basement. I don’t know why he does that, but it leads to the circumstance which is hazardous to them but amusing to us. The funniest element in the film is Hyacinth’s old dad who is naked and bound to her bed with the chain. I was amused by what this old man did with ‘a dusty penis’ – it looks silly rather than dirty.

Even though I did not understand much of the movie, I enjoyed how it looks. The movie is shot with the digital camera, and it is quite faithful to the looks and feelings of those old silent black and white film(it is more faithful than “The Artist”(2011)). The cinematographer Benjamin Kasulke gives us the spooky show of lights and shadows on the screen, and the faces of actors are effectively utilized in this dreamy background. As the other audiences said after the movie was over, Jason Patrick looks dashing, and Isabella Rossellini is both compelling and elusive as the wife who does not much care about her husband, and Udo Kier gives a surprisingly normal performance as the doctor visiting them, even with the X-ray photography showing the cancer which looks like a handcuff.

I was not bored by “Keyhole”, but my mind went to Guy Maddin’s other quirky film “My Winnipeg”(2007). When I visited Chicago before attending 2010 Ebertfest, I stayed at one apartment in Des Planes, Illinois, and, on one inane Sunday morning, I watched “My Winnipeg” on DVD while waiting for the commuter train to Chicago. It was a wonderful moment to be treasured, and I revisited it again recently for writing this review, and I was easily drawn to its odd charm again.

“Keyhole” was a less satisfying experience than that. I was kept being interested, and I could see that some of the characters were dead or lost memories, and I could accept the increasingly blurred line between the living and the dead in the house – but I could not easily find the center to hold my attention. None the less, it was not the waste of time, and I happily went back to Daejeon without any complaint.

This entry was posted in Movies and tagged Family, Ghost, Haunted House, Memory. Bookmark the permalink.