“Chronicle” is an interesting SF drama working well as the mix of the two film genres which have become notably prevalent during the last decade. On the surface, it presents itself as one of those ‘found footage’ movies a la “The Blair Witch Project”(1999) and “Paranormal Activity”(2007) while doing a good job of presenting the convincing reality for its story and characters. Beneath the surface, we see the dark adolescent drama tragically amplified by the superpower from nowhere. It may be cool to have the superpower, but there is always the big responsibility attached to the big power, and they learn a hard lesson with heavy price in the end.

At first, the story is mainly told through the camera operated by Andrew(Dane DeHann), and we look at his daily life as a lonely high school kid. Except his cousin Matt(Alex Russell), he has virtually no friend in his school, and even Matt is not that close to him although they go together to their school every morning by Matt’s car. Now Andrew attempts to guard and express himself through the video camera he carries around, but that does not change his low status in the school much; he still finds himself bullied and alienated as usual while everything is recorded in his camera.

But a sudden incident happens, and that affects everything in his life. Right after becoming miserable again at one evening party held at the barn near the town, he reluctantly follows Matt and Steve(Michael B. Jordan), a popular kid running for the school president election, to some place outside. Matt and Steve found a dark, ominous hole on the ground, and they go down into the hole to find what’s inside it. This is not a wise choice; they would be the first victims of whatever lurks inside if they were in other films, but, fortunately for them, that does not happen in this movie.

After going deeper into the hole, they encounter a big, mysterious illuminating object, and then a strange thing occurs. It is neither explained nor shown well, but, after somehow managing to survive, the boys find that they have acquired the telekinetic power. They can move the objects when they focus on them, and there is more than that; like growing muscle, their power is growing step by step through several trials and exercises.

The movie handles its supernatural promise with realistic approach, so we get amusing moments while the boys in the film try to deal with it. Like any regular kids who happen to discover a new ability inside them for the first time, these boys have some fun with their superpower while getting close to each other through their shared secret. While pulling several pranks for their private amusement, they have a great time when they find that they can also soar up in the sky. As you know, it is quite high and cold up there(while watching this moment, I thought about how many times I was reminded of the low temperature outside after I boarded the plane), but they don’t care because it is cool to exert their power in the open space anyway.

Even while all these things happen, the camera is always near them. It is basically a genre gimmick for storytelling, but the director Josh Trank, who wrote the story with the screenplay writer Max Landis(he is John Landis’ son, by the way), has an interesting way of handling his camera around his characters who wants to demonstrate their new ability in front of their camera. Not just limited within Andrew’s camera, the movie moves more freely than we expected. For instance, there is actually more than one camera in the movie, so we get the scene where the conventional editing job with the two cameras is possible.

Furthermore, thanks to their growing power, the camera moves around them more deftly and flexibly than before like an unseen observer because now they do not have to hold it with their hands. Though I have no idea about how they can hold the camera or other objects high in the air while occupied with the other things, the result is thrilling enough to overlook its apparent contrivances, and the special effects are nicely incorporated into the raw quality of the video image. This is a low-budget film, so we can easily discern where they use CGI, but it is acceptable as ‘found footage’ and I could accept that they can really fly above the clouds.

And the movie has a serious coming-of-age drama to grip our attention inside its format. It is fun to play with the power for a while, but the boys soon face its dark side. They realize that they can cause danger to themselves as well as others around them if they are not careful enough. Steve and Matt think they need the rules to restrain their ever-growing power, but it is not that easy for the boys going through hormone-charged adolescent years. Especially in case of Andrew, he has lots of emotional issues not only at school but also at his home due to his dying mother and abusive alcoholic father, and the power given to him is like gasoline to his seething troubled mind. Even though his power makes his school life a little better, that does not change what he is, and he still feels inferior to his new friends. Moreover, probably inspired by Darwinism, he gets a different view on their power, so the circumstance becomes more unstable along with the crumbling friendship between them. 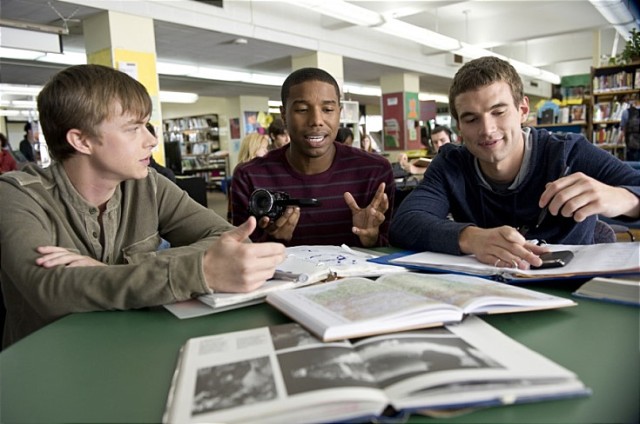 Three main actors, Dane DeHann, Alex Russell, and Michael B. Jordan, give the credible performances. All of them are relatively unknown actors(but maybe you can recognize DeHann as one of the patients in the third season of HBO drama “In Treatment”, and Jordan as one of the memorable supporting characters in another well-known HBO drama “The Wire”), so you can instantly believe them as your average high schoolers along with the dynamic in their relationship. They are smart, but they are thrown into a difficult situation beyond their control without anyone to guide or counsel them, so what eventually happens is rather inevitable.

While watching their story, I recalled what I observed from South Korean movie “Bleak Night”(2010). In that film, the teenager characters cause the irreversible tragedy because of their failure to be open about themselves and connect with each other, and only bitterness is left with sorrow and regret. The same thing can be said about “Chronicle”, except that the ramification of their acts is a far more disastrous because of what they are capable of. With more power, there comes a bigger consequence as shown in its destructive third act, and there is no way back as a result.

“Chronicle” does not change the superhero genre, but it tries something different and refreshing, and the result is compelling as a whole in spite of several notable weaknesses as ‘found footage’(by the way, who gathered and edited all these video images from various sources?), and I admire how it establishes the story and the characters succinctly in its limits and then flies over them with excitement and thrill during the running time of less than 80 minutes. In addition, the movie confirms to me that we are very lucky not to evolve to have a telepathic ability; it may be useful for empathy, but imagine how stressful it can be when you happen to be connected with a guy having a bad day. And I really do not want to sit on the ledge at the top of the skyscraper without any safety measure even if I could fly.