No actress can substitute for Marilyn Monroe, who has remained as one of the most famous cultural icons of the 20th century through her movies and photographs. This legendary Hollywood actress has her own natural quality which cannot be possibly imitated; when she appears on the screen, our eyes are always drawn to her, and our hearts are then smitten with that irresistibly innocent sexual appeal from her. She is sexy, but she is never conscious of that, while radiating the power to make a cranky nerd like me smile eventually.

A very good thing about “My Week with Marilyn” is that it succeeds in taking a sidestep around that problem thanks to the beautiful performance by Michelle Williams. We instantly see that Williams is playing Monroe right from her first scene, but, rather than cheaply imitating Monroe, she deftly suggests Monroe’s star aura and its effect on the people surrounding her while recognizing the gap between her and Monroe. Williams is very convincing at least during the running time, and she eventually presents us her character as someone more complex than a mere object of desire in the end.

But the story is not about Monroe herself but Monroe viewed by a young man named Colin Clark(Eddie Redmayne), who was the second son of an art historian Sir Kenneth Clark. Clark took his first job as “the third assistant director” for Sir Laurence Olivier(Kenneth Branagh) when Olivier was directing “The Prince and the Showgirl”(1957), and, while acquainted with other people on the set, he encountered Marilyn Monroe, who was brought by Olivier as the heroine of the movie. He wrote his experience with these two stars in his diary, and, after retiring from his career as a successful TV documentary producer, he used his diary for his two books(“My Week with Marilyn” and “The Prince, the Showgirl, and Me”) the movie is based on.

I do not know for sure whether Clark was seriously involved with Monroe or not, but his story is unfolded in front of a funny, interesting variation of backstage drama. Monroe finally arrives in England as soon as her latest husband, playwright Arthur Miller(Dougray Scott), gets out of his problem with the American government, but Olivier soon begins to have the same frustration the other directors in Hollywood had with her. She is always late for the meetings and shootings. Sometimes she spends a whole day in her bed. When she does appear at the studio, there is another source of frustration waiting for Olivier and the crew; she so frequently forgets her lines that they have to shoot again and again in many cases. You probably know that famous story behind the one scene in “Some Like It Hot”(1959). It is just a simple line(“Where’s the bourbon?”), but Monroe kept forgetting it, so the director Billy Wilder put the note with that line written on it in the drawer – but then she pulled a wrong drawer, so Wilder had to put the note in all of the drawers shown in the film.

Olivier is naturally not happy about this difficulty. Furthermore, as a traditional stage actor, he is particularly irritated by the method acting tried by nervous Monroe, who even brings her coach/motivator Paula Strasberg(Zoë Wanamaker) along with her just for making sure that she is doing all right. But he later admits to Clark that it is worthwhile to try to pull something unique from Monroe no matter how much difficult it is to deal with her. Maybe she is not a great actress for the theater, but Monroe is surely a great star actress for the camera. When everything including her works in front of the camera in a priceless moment, it is simply fantastic, and all the agonies and frustrations they have gone through look like a good price for that – ant that is true.

With her own singing and seamless physical presence, Williams gives us a luminous illusion of how wonderful it is to watch Monroe at her fully functional mode as the movie star. The fact that she was nervous about playing Monroe, who must have been also quite nervous at that time, during the production helps making her performance more interesting. There is surely a gap between the two actresses, but they are somehow connected, and we gradually accept Williams as Monroe while following the story.

While going between Olivier and Monroe, Clark begins to see a needy, vulnerable, and unstable girl with unhappy past inside her. Like any other men before him, he falls in love with her, and so does Monroe, who has the tendency to lean on the men whomever she thinks can protect her. Arthur Miller recently disappoints her and breaks her hearts, and now she needs somebody else to be near her, and that is Clark. It eventually turns out to be just a brief affair, but being with Marilyn is absolutely a fantastic experience to be remembered. She is an unhappy woman, but she can be a warm, joyful girl with kindness if she wants. Not many guys can get such a good chance like a skinny-dip with Marilyn Monroe, you know.

As the observer/hero in the story, Eddie Redmayne is rather bland compared to his co-performers, but he does an adequate job as a naive young man impressed by the larger-than-life figures surrounding him. The subplot involved with the relationship between him and the girl working in the costume department(Emma Watson in a thankless role) feels redundant, but at least it is not a fatal weakness to the story itself.

It goes without saying that the other performers have more fun with their relatively showier characters. To Branagh, who is Oscar-nominated along with Williams for this film, playing Sir Laurence Olivier must have been like a karmic role. Both are famous British stage actors, and both are also famous for their respective Shakespearean films they directed, produced, and starred in. Though Branagh gives a subdued performance as an exasperated star/director, that fact outside the film makes his acting more fascinating than it looks. 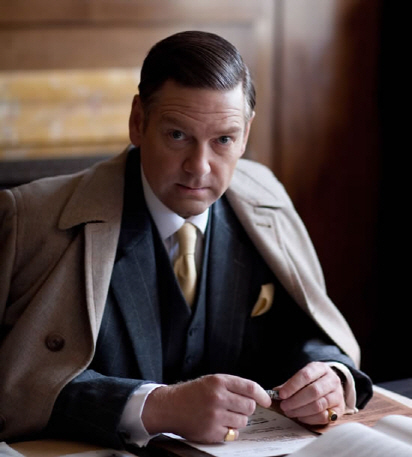 Julia Ormond is Olivier’s wife Vivien Leigh; not so surprisingly, as an aging actress, she is concerned about her husband working with one of the sexiest women on the Earth, but she sees that directing Monroe is far from being infatuated with her. Toby Jones is Monroe’s publicist Arthur Jacobs, and Dominic Cooper is her agent Milton Greene, who gives a hostile advice to Clark as a man who once was fallen under Monroe’s spell. Judi Dench is witty and kind as Dame Sybil Thorndike; whenever there is a conflict on the set, she always smooths things out as a respected elder thespian with no-nonsense attitude.

You may complain that “My Week with Marilyn” reveals nothing new about Monroe herself, but that is not its intent. This is a little story about that how wonderful it was for some young guy to work with the celebrities and, above all, how unforgettable it was to spend some private time with one of the great Hollywood movie star actresses. The movie is charming and entertaining, and Michelle Williams does a really special job – and she made me smile with recognition, to be frank with you.