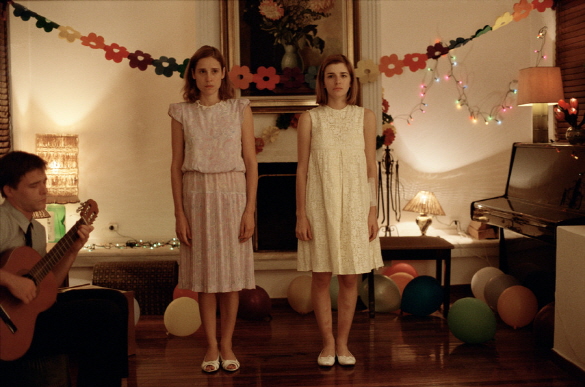 When I watched Greek film “Dogtooth” for the first time in early 2010, I thought it was quite a strange film, but now I have some second thoughts after the third watching at last night(The film will be released in South Korean on the next weekend). No, I still do think this is one nutty family, but what recently happened in North Korea made me muse on their behaviors depicted in the film. Living next to one crazy alien society shut down from the world outside, maybe some of our South Korean audiences will not find this film as weird as the other audiences did.

But the family in the film is indeed leading a very strange lifestyle. First, their vocabulary is a little different. For example, they are taught that “Sea” is defined as “a leather armchair.” “Motorway” means “a strong wind”, and “Carbine” is “a beautiful white bird.” As far as I see, the parents only change the definition of several nouns, so they do not have difficulty in communicating with someone from outside – but I wonder what she really means when one of the family members says they will eat burger for dinner.

Living in the big house with a swimming pool in some unknown remote place, this family is shut off from the world outside. They are not only surrounded by the big plants in the garden but also the big, tall fence blocking their view. The family is affluent, and the house is mostly clean, and they do not see any problem with being stuck in this isolated place. They do not watch TV or read newspaper(but they have some books), and only signs of the civilization outside are the planes which fly across the sky above from time to time. 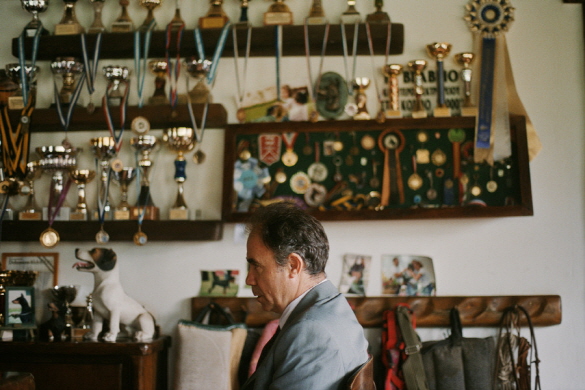 How do they come to have such a bizarre lifestyle? The movie never explains the motive, but it seems that the father initiated this lifestyle probably a long time ago. He is the only one who can go outside with his car(he seems to be the manager of a big plant), so it is his job to supply anything his family needs in their life. He seldom talks about his family in front of other people(he just says that his wife is too ill to meet people), and he blocks anything that may interfere the family life. When he buys foods and water, he painstakingly removes the labels for not giving any outside information. How thoughtful he is.

His wife obeys to him as a good wife(she is physically not ill at all, by the way), and so do their children. They have two daughters and one son. Though they are in late adolescent years, they behave as if they were still little children under the protection of mommy and daddy. They have several strange games to spend their daytime, like “a game of endurance”: they test themselves who can stand longer when they dip their fingers in hot water. In case of their other private game, they anesthetize themselves with chloroform to find out who will wake up first.

They have been leading a good life at least in their view, but it is gradually revealed that something unstoppable is being emerged while their abnormal behaviors, including barking like a dog on their knees when they believe they are threatened by a cat, continue. Though he cannot block everything, the father is determined to stop that by any means necessary, and there are several bursts of violence to shock you mainly due to the clinical, objective attitude of the film.

The film, which won Un Certain Regard Award at the Cannes Film Festival in 2010 and was nominated for Foreign Language Film Oscar early in this year, has a lot of cold, distant feelings, but it is also interesting and, sometimes, amusing to watch. The director Giorgos Lanthimos, who wrote the screenplay with Efthymis Filippou, keeps everything straight throughout his film with the wry, subtle sense of black humor. The aforementioned twisted vocabulary is used several times in a funny way, and there is also an outrageous scene depicting the way the children celebrate the anniversary of their parent’s wedding. The actors in the film play as seriously as possible to make the twisted reality of their characters mundane – even when they cross the boundary of our ethics out of necessity, they never look self-conscious while supporting the detached tone of the film.

Maybe because of the death of Kim Jong-il two weeks ago and the following response of North Korean people shown on the media, these bizarre human behaviors in the film are not that weird to me as I remembered. I and other South Koreans know too well about how twisted North Korean society have been while shutting up itself from the world and brainwashing its people with the crooked ideas just like the family in the film. One savage scene in the movie reminds me of how severely North Korean people are punished if they are found watching South Korean TV shows.

I remember well when Kim Il-Sung, the former dictator and the father of Kim Jong-il, was dead in 1994. Even we South Koreans were flabbergasted to some degree to see the hysterical mass mourning even though we had been well aware of that he had been literally worshipped as the big daddy of North Korea. Now his son is dead, and his grandson becomes a new leader to be worshipped without much trouble, and we do not find the recent behaviors of North Koreans under this wacky dictatorship particularly weird, mainly because we have seen this before. Compared to this insanity, “Dogtooth” is like a mild fairy tale.

By the way, what is the point of the movie? It does not express its opinion while firmly holding its austere attitude, but I think the lesson from the film is that the kids are bound to grow up no matter how much the parents try to restrict them with their stringent home schooling. Maybe it works for a while, but it cannot last forever. No wonder some North Korean people escape from their country in spite of the constant brainwashing and the possibility of severe punishment. 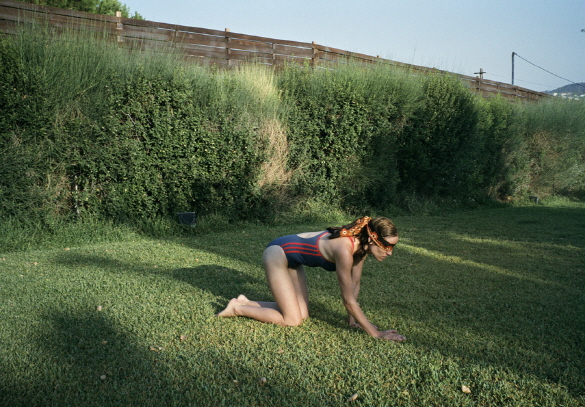 This entry was posted in Movies and tagged Adolescence, Drama, Family, Home schooling. Bookmark the permalink.