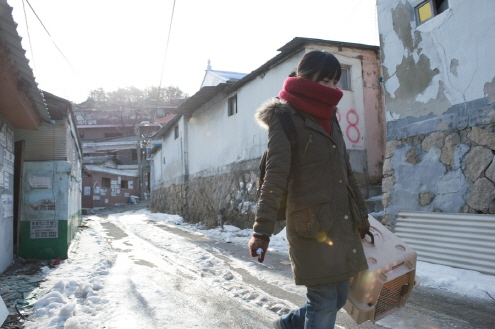 No matter how much we try to leave behind, it seems inevitable that our past always comes back to us – to be picked up by us again. In case of Hye-hwa,  a young heroine of South Korean movie “Re-encounter”, that happens as if it were fateful in her work. While working at a veterinary clinic as a dog beautician, she also takes care of the abandoned dogs or the ones that the owners cannot take care of any more. Her home is full of those puppies. Some of dogs freely move around in her shabby house; whenever she returns from the work, she has to take care of the excrement problem on the floor first.

The daily life of Hye-wa, gracefully played by Yoo Da-in, is simple. When she does not work at the veterinary clinic, she tries to rescue abandoned dogs around the deserted places(There is a man who goes around that place for catching them and selling them to the restaurants). Recently, she is particularly interested in a dog with a serious medical problem, but it is not easy to capture it despite her efforts. And she is comfortable to work at the clinic. Her employer is an amiable guy, and he is an widower with a young playful son who loves to play some pranks on her. When they are together at his home, they look like a happy family.

However, her mundane life is shaken by a sudden appearance of the man whom she has wanted to forget forever: her ex-boyfriend Han-soo(Yoo Yeon-seok). Five years ago, when they were in the same high school, she was impregnated by him, and, whether they wanted or not, they were bound to marry. However, Han-soo suddenly disappeared. Left alone and afraid, Hye-hwa gave birth to her precious baby who died on the next day due to heart failure. 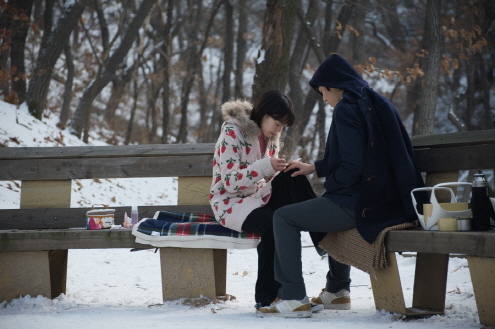 That was what her mother told her at that time, but Han-soo now tells his ex-girlfriend that it was a lie; their daughter was alive and she was adopted by some couple with the consents from both of their parents. He says he knows where she lives now, and he wants Hye-hwa to see her daughter just for once. She coldly rejects him at first, but the feelings kept inside her are awakened from the hibernation, along with their hurtful past told in the flashback sequences. In the past, she was full of perkiness and directness that sometimes overwhelmed young, shy Han-soo. But now, although she is still lovely and kind, Hye-hwa is far different from what she was, while trying to go through another day in her life with insouciant attitude.

While still hating him, She finds herself gradually drawn to his plea. However, while watching him, you cannot help but be unsure about Han-soo’s motive. Yes, he feels guilty about an unforgivable deed he had done to his ex-girlfriend, and he really wants to compensate for his wrong, but there is something not quite right about him. Having just been discharged from the military service due to the injury(he walks with the limp in one of his legs), he quietly goes back to his family home and then leaves home without a word even though his family is at home. And there is quite disturbing aspect in the scenes he tries to see the girl whom he assumes is their daughter. No wonder her parents respond to him in a rather harsh way – I think I can say that he deserves that treatment for the disturbance he foolishly causes, though he means no harm.

Thanks to his sincere but reckless choices, the story later goes into the more serious and suspenseful situation than we expected at first. The director/writer Min Young-geun does not hurry his story; he keeps it inside the boundaries of the real world we live in. Unlike Han-soo, who is so irresponsible that you cannot help yourself from shaking your heads while watching him cause another problem or annoyance, Hye-hwa tries to be sensible as much as we can do in her position. None the less, it is hard to deny for her what she feels about the young girl in question. At one point, she is even on the verge of committing something criminal before she fortunately comes to her sense. 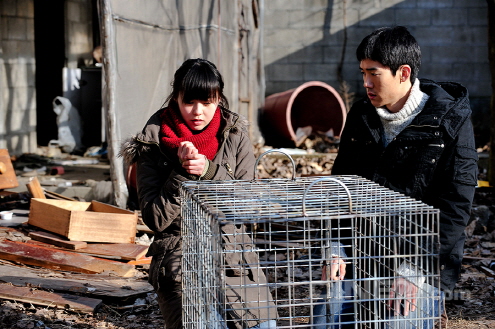 Hye-hwa is mostly reticent throughout the story, but we can sense everything we have to know from the beautiful face of Yoo Da-in, who gives one of the best performances of this year. Some South Korean audiences, including me, remember her disastrous turn in “Mandate”(2008), one of the infuriating atrocities done in the South Korean movie industry in the last decade, but she definitely proves here that she has the right stuff to show us as a talented actress, after all. She creates a human being warm and loving to others while never losing her bitter attitude to the past represented by Han-soo. In one scene, when Hye-hwa briefly reveals and then quickly hides her feelings to her employer, the film requires her to be delicate and subtle, and Yoo delivers it with the precise timing.

Yoo Yeon-suck is also good as her hapless ex-boyfriend. It is a rather difficult job for him, for his character annoyingly clings to Hye-hwa while continuously causing the troubles in her stable life. I don’t want to give spoilers, so I will not go into the details about what he will do later, but I can say he will make you as angry as Hey-hwa. Though it later turns out that he did not tell her some fact which makes his deeds look less disastrous than they seemed, it goes without saying that he screwed up everything he intended to do while causing more harm to others. At least, he is not a bad guy, but he only makes his and her situation worse than before. Yoo Yeon-suck presents us a understandable troubled human being who desperately sticks to what he believes with the quality of a puppy dog. Even when you cringe at the sight of him, you feel sorry for this pathetic guy – that is why you can understand why Hye-hwa makes a certain crucial choice at the end of story. Considering its plot structure, the movie is like a bleaker version of “Blue Valentine”(2010) with a different direction.

“Re-encounter” is a very engaging character drama with small, nice touches to amuse us. While calmly revealing the scars inside the main characters with its dry approach, it also finds its warmth and humor from small moments from time to time. I have to point out that the various dogs featuring in the film are really loveable creatures even though most of them look plain. While apparently, and effectively, working as the metaphor for their carer’s story, they are good extras – they remind us that we must love dogs.