“Underwater” digs into its genre territory as much as intended, and I was entertained enough during my viewing even while recognizing its weak elements. Although it stumbles a bit during the last act which may feel rather preposterous to you for good reasons, the overall result is tense and efficient at least, and it surely deserves to be compared with other notable underwater SF horror flicks such as, say, “Leviathan” (1989).

At the beginning, the movie opens with a series of ominous articles and reports about a questionable underwater drilling operation at the bottom of the Mariana Trench in the Pacific Ocean. Although this drilling operation does not look that profitable (Is it really worthwhile to drill there just because of getting more oil?), some big and powerful Chinese corporation has funded it nonetheless, and the brooding score by Marco Beltrami and Brandon Roberts directly signals to us that there is something very fishy about this drilling operation.

After swooping down to a giant underwater drilling facility at the bottom of the trench, the movie promptly thrusts its story and characters into a sudden unexpected emergency. When she wakes up earlier than many other co-workers in the facility and then is about to begin another usual workday, Norah (Kristen Stewart) senses something strange and alarming, and that turns out to be the mere prelude for a huge catastrophe, which, within a few minutes, not only destroys most of the facility but also kills most of guys working and living there.

Fortunately, Norah manages to survive along with two colleagues of hers, and they subsequently join three other survivors including the captain of the facility, but the situation turns out to be worse than they thought. Because the facility is getting crumbled further, they must get out from there as soon as possible, but, alas, there is not any escape pod for them, and their only possible option for now is going to a nearby facility for themselves. 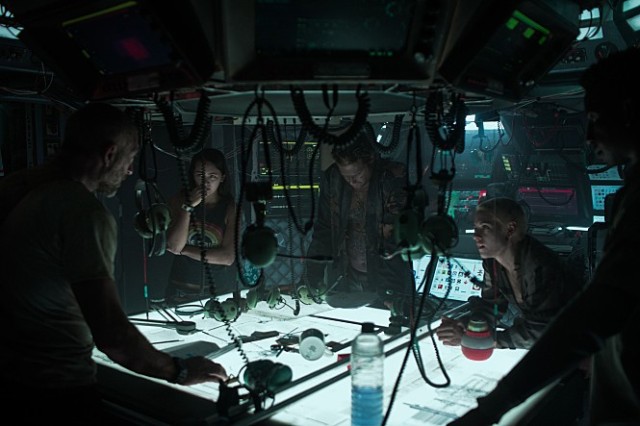 Of course, this option is not so easy to say the least. First, they have to wear those big suits engineered for underwater operations, and then they must walk around one mile (1.6-km) as constantly threatened by that dark and harsh underwater environment of the trench. While they surely need to pay attention to the amount of oxygen available to them, there are many other risky factors in front of them, and we later get a grisly moment involved with the matter of pressure.

Anyway, Norah and others come to take risks because they have no choice from the start, and the movie steadily maintains the level of suspense as they struggle to move from one risky spot to another. While they have some moment of respite after succeeding in getting out of the facility, the grim possibility of death still hovers around them, and their fear and desperation become more palpable as their chance of survival keeps getting decreased minute by minute.

And then, this is not much of a spoiler to you if you are accustomed to its genre, Norah and other survivors come to realize that there is something unknown and dangerous in the water, which is probably responsible for what happened to their facility. They accordingly become more careful in their advance across the bottom of the trench, but it seems that they are stuck in a circumstance way beyond their heads, and we come to brace ourselves more as fearing what may suddenly appear out of the darkness surrounding them.

The movie eventually comes to lose its sense of mystery as showing more and more of whatever is menacing its main characters, and you can easily guess how some of them will get killed along the story, but director William Eubank keeps us engaged via a series of intense moments of horror and suspense. For instance, I enjoyed how he competently dials up and down the level of anxiety during a sequence unfolded inside a long underground tunnel, and I was also sort of amused by what is revealed around the finale, which makes the film cheerfully outrageous in addition to evoking the works of a certain well-known master of American horror literature.

I must point out that the screenplay by Brian Duffield and Adam Cozad often feels thin and mechanical in terms of characterization, but that does not matter much as the movie is effectively driven by the increasing sense of urgency and dread on the screen, and a small group of performers assembled together for the film convey well to us the mentally and physically pressured status of their characters. While Kristen Stewart strongly holds the center as the main star of the movie, she is also supported well by the other main cast members including Vincent Cassel, John Gallagher Jr., and T.J. Miller, who occasionally feels strained as the main comic relief character in the film but is mostly adequate at least.

In conclusion, “Underwater” is a well-made genre piece equipped with sufficient amount of underwater terror to hold our attention, and, to be frank with you, it made me a bit nostalgic about when I watched “Leviathan” on TV at one night many years ago. Like that film did at that time, the movie intrigued me and then terrified me, and I was glad to watch in one of the big screening rooms of a local movie theater during this morning. Yes, it does not break any new ground at all, but it did its job better than I expected, so I will not complain for now.

This entry was posted in Movies and tagged Horror, Monster, Sea, SF. Bookmark the permalink.